A couple weeks ago I had the opportunity to attend Ignite Edmonton, courtesy of EEDC. This was the first year for Ignite, though it’s fair to say the event was the latest iteration of an idea that EEDC has been pursuing for a few years now. How do you host an event to promote creativity and entrepreneurial thinking in a more interesting and engaging way than the typical conference? 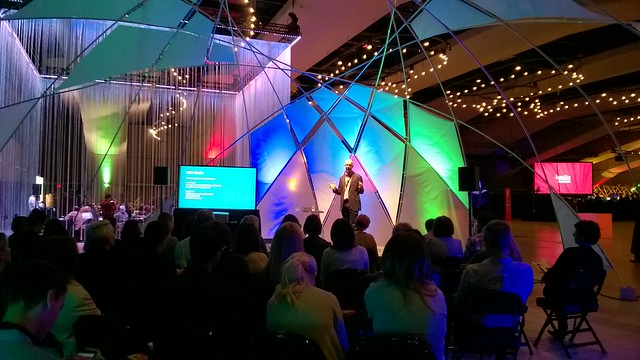 Ignite’s roots go back to September 2013, when the first E-Town Festival took place here in Edmonton (which I previewed here). E-Town was “an intensive two-day festival of ideas for entrepreneurial-minded people who get excited by innovation, change and disrupting common thought.” It was also a mishmash of workshops, plenaries with big-name speakers like Chris Hadfield and Guy Kawasaki, a Food Truck Fest, a concert featuring the Barenaked Ladies, and more. The event took place throughout the Shaw Conference Centre, with the big sessions being hosted in Hall D.

I completely appreciated the opportunity to hear from Chris Hadfield, and I love food trucks more than most, but there was an awful lot going on over those two days. You have to admire the bold vision of the folks at EEDC who organized it though. They wanted to make a statement, and they did. 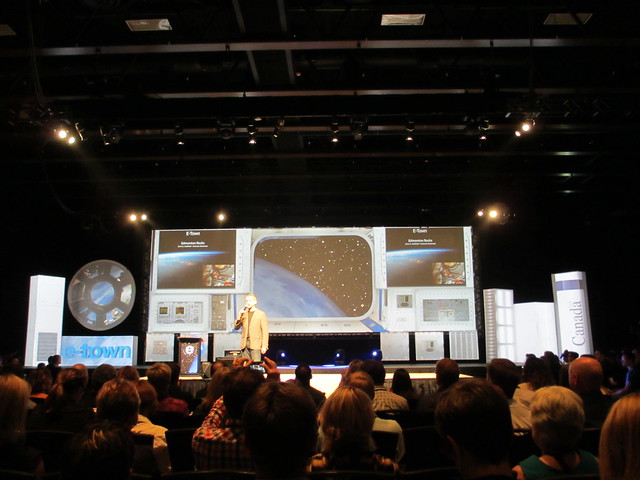 E-Town returned in 2014 for another two-day event that featured speakers like Hayley Wickenheiser, Bob Nicholson, and Raine Maida. It kept the Food Truck Fest, and also had a concert featuring Maida and his wife Chantal Kreviazuk. The event was promoted like this:

“E-Town Festival feeds the mind and heart of people who get excited by innovation, creativity and disrupting common thought. You’ll be immersed in new ideas from thought-provoking speakers, contribute to interactive breakout sessions, connect to other bright minds and be entertained by great artists. You’ll leave inspired, re-energized, smarter and ready to take bold action.”

Again there was a desire to build a “high-involvement, high-energy event” that “wasn’t your typical conference.” But I know more than a handful of people who looked at either the agenda or the price or both and felt it was safe to pass on the event. I think both iterations of E-Town were reasonably successful, but people attending a concert is not the same thing as attendees taking something useful back to their work. I wonder if the right people were in the room.

There were plans for another E-Town, as the website stated:

“Looking to the future, we envision a multi-day, multi-venue festival experience that attracts attendees from western Canada and north-western United States.”

That didn’t come to pass, of course (at least not yet). After having attended Ignite, I think that’s probably a good thing, because I like the new direction they’ve taken.

To me the idea that EEDC has been pursuing first with E-Town and now with Ignite is this: creative, entrepreneurial thinking can help startups, big companies, and everyone in-between, but it doesn’t have to come from the usual suspects or in typical business-conference-fashion.

I think that’s why there was such an interest in previous years to incorporate musicians, artists, food trucks, and other not-usually-seen-at-business-conference-type folks into the event. They all have useful, interesting, and entertaining things to say, things that those of us in business (whether at startups or big companies) can benefit from hearing.

Ignite stayed true to that idea, I think, but with a course correction. Instead of just getting all those folks together in the room and hoping that the cross-pollination would happen, Ignite took a much more intimate and curated approach.

Ignite was organized by a big team of EEDC staff and volunteers, led by Ken Bautista, Director of Entrepreneurship and Innovation at EEDC. There’s a certain expectation of polish that comes with an event organized by Ken (he’s set the bar high with TEDx, Startup Edmonton, and other events). He delivered once again with Ignite. The website, name badges, program, swag bags, venue, and everything else were attractive, high quality, and cohesive.

This year’s event took place on the Assembly Level in Halls A and B, with coffee, lunch, and social space outside in the common area. That meant everyone was in more or less the same space, which was better for networking and running into people.

Inside the two halls is where the main action took place. I have to completely agree with Neetu’s assessment of the venue:

//platform.twitter.com/widgets.js
The six pavilions – Cocoon, Interlock, Orb, Riverview, String, Transposed Formation – were all designed by local designers through a special design competition setup just for Ignite. Each of the workshop sessions took place in one of the pavilions, which I think it’s fair to say achieved the desired effect of creating “a completely immersive, incredibly inspiring experience.” Everyone was snapping photos and commenting on them! Because of the way the room was setup there was probably more noise bleed than the organizers had hoped for, but I think most people were willing to forgive the excess noise because of the uniqueness/novelty of the pavilion designs.

Instead of bringing in food trucks as was done for E-Town, attendees of Ignite were treated to food created by the Shaw Conference Centre culinary team, led by Executive Chef Simon Smotkowicz. And why not? He’s one of our city’s most accomplished chefs! I thought the lunch options were great, and went back for more than a couple of the tasty sandwiches.

For scheduling, Ignite used Sched. Attendees could login ahead of time and choose their sessions, which produced a completely customized agenda for the two days. Each day started with a couple of main stage talks, which were about 30 minutes in length. The workshop sessions were perhaps a touch long at 90 minutes, but thankfully there was a lot of social time built into the agenda, even on top of lunch and drinks.

On the final afternoon attendees had the opportunity to attend a “studio session” which offered an introduction to “the inner-workings of some of Downtown Edmonton’s most creative offices and workspaces.” Startup Edmonton, Ice District HQ, DDB, and TELUS all hosted field-trips.

You can see all of the speakers and sessions here.

Just like Nathan, I found the Square presentation by Steve McPhee to be thought-provoking. Be sure to check out his post for more highlights! In terms of main stage sessions, I also really enjoyed both Nir Eyal‘s talk on building habit-forming products (looking forward to reading his book Hooked) and Ted Graham‘s talk on what he learned about innovation by driving for Uber. Their presentation styles were completely different, but both were able to use their limited time to get across some interesting ideas.

My favorite session was a workshop called “Building a Team Culture with Respectful Leadership”. It was led by FC Edmonton Head Coach Colin Miller.

“Colin Miller specializes in the art of respectful leadership. As a coach and former professional athlete, Colin has faced every challenge in the world of teams from both sides of the white line.”

“His leadership style is the crux of a unique approach to team-building which stresses respect and professionalism as the building blocks in pursuit of excellence. Any company can use the respectful leadership model to elevate their team – no matter their size or budget.”

In addition to being an engaging and sometimes funny speaker, I really enjoyed Colin’s approach. He focused on what he knows best and is passionate about, which is football. The insights he shared could of course be applied to business, but he didn’t have to spell it out. That was an exercise left to the reader, and I think made for a bigger impact. 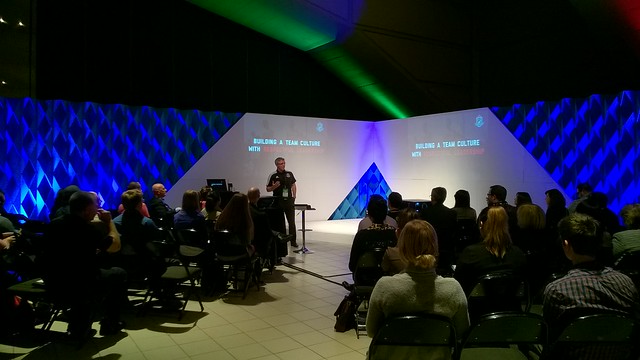 For Colin, respectful leadership is “in-depth knowledge of your field” and “treating people correctly.” He shared a few key lessons that he has gleaned through his years of working with football players, including:

I don’t think anything he said was revolutionary, but the way he framed his key points and supported them with examples from his experience in coaching was really valuable. Most importantly, I felt I could immediately take what he said and try to apply it to my own teams. I think that’s what I liked best about Ignite – most of the information seemed actionable.

I understand that through Ignite’s Community Fellows Program, sponsored by nine different organizations focused on entrepreneurs and business, some people in the audience had their attendance paid for (like me). That probably helped the event seem fuller than it would otherwise have been, because I doubt the $449+ tickets sold out (though the content, food, and swag bags make it seem like a pretty good value). My hunch is that EEDC didn’t make any money on Ignite. But I hope that’s not the only measure of success they consider. 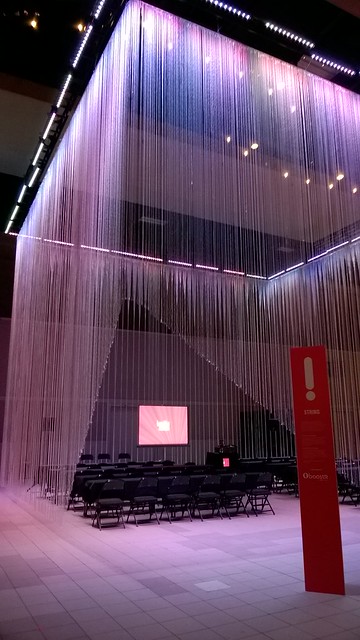 Whereas E-Town seemed targeted to everyone with concerts and food trucks, I think Ignite’s target audience (“teams of entrepreneurs, creatives, builders and change makers”) was narrower and the event was more successful as a result. Instead of talking about the spectacle, attendees were talking about the content. It’s anecdotal, but my conversations with people at the event and most of the comments I saw on Twitter suggest to me that Ignite was not just a fun event that attendees will forget. It was something they got value out of and will take back to work.

I don’t know if Ignite will become an annual thing, but I think if it returns in 2016 using a similar approach to this year, EEDC will have a successful event on its hands.

Ignite 2016, hopefully! But before that, there are a number of other entrepreneurship-focused events coming up:

Thanks to EEDC for the opportunity to attend Ignite. See you at Edmonton Startup Week!