Tonight I joined close to 1,200 others at the Shaw Conference Centre for The Walrus Talks Aboriginal City, “eighty minutes of lively, thought-provoking ideas on Aboriginal life in Canadian cities – from culture, to business, to politics, and more.” I didn’t realize the event was going to be so large but I’m glad it was; some very important ideas and issues were discussed this evening. The event opened with a blessing by Elder Ida Bull, after which Confederacy of Treaty Six First Nations Grand Chief Bernice Martial and Mayor Don Iveson brought greetings. 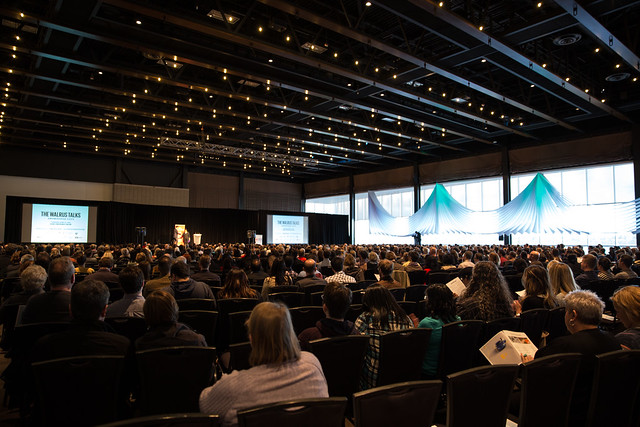 After a brief introduction to the format from Shelley Ambrose, publisher of The Walrus, we got right into things. There were nine different speakers this evening (you can read their bios here) and each of them had seven minutes on stage. Here are some the highlights and takeaways from each presentation:

Douglas is a renowned Canadian architect and is an officer of the Order of Canada. He spoke about his vision for the future of the city. “I see a thriving, organic, densely-populated metropolis that is a dynamic, living organism.” He took the analogy further and said that everyone has a responsibility to contribute to the health of the organism as we are the nutrients for the city. “We must first change our mindset from a culture of exploitation to a culture that reflects the indigenous values of sharing.”

“We can shape our environment but in turn it shapes us.”

Lewis is well-known to Edmontonians of course, and I had heard some of what he had to say previously. But that did not diminish my enjoyment of his message and delivery. Lewis spoke about storytelling primarily. “A city cannot truly know itself or reach its full potential until it knows and cherishes its stories,” he told us. “All stories, the good, the bad, sometimes the unbelievable.” He also cautioned that “we are not telling the stories and paying the proper homage to the spirit of this place.” He noted that even the name “Edmonton” carries a story in that “monto” means the divine essence, the power of creation, or as he clarified for Star Wars fans, the force.

Lewis earned a few chuckles when he told us that the Aboriginal population of greater Edmonton is around 100,000. “Yes, you are surrounded by Indians,” he said. “But it’s all good!” He finished with a plea for more storytelling. “I beg all of you, leave no story untold.”

Patti is the director of research, training, and communication at the Native Counselling Services of Alberta. She spoke about the over-representation of Aboriginal people in the Canadian justice system. “This is indeed a crisis,” she declared. Patti noted that Aboriginal people make up 43% of admissions to custody in Alberta. The root cause? She says it can be traced to the inter-generational transmission of historic trauma, a topic discussed in the graphic novel The Outside Circle.

Ryan is an Aboriginal comedian and though he took a mostly serious approach with this presentation, he couldn’t help but make people laugh a few times. “I come from a long line of moose hunters,” he told us. “I don’t know much about cities.” In contrast with the “we’re here” message that was repeated a few times throughout the evening, Ryan called upon non-Aboriginals to speak up. “So often we are burdened with the responsibility to talk, to explain, to teach,” he said. “I can’t wait for the time when I get to sit and listen, to learn, to understand what you see.”

He said he knows what he can’t do in the city. “I can’t hang my dead moose from an oak tree, apparently it brings down property values,” he said to laughter. But he also highlighted what he can do. “I can contribute to the conversation. I can listen and I can share. And I can be patient.” He said that Aboriginal people are sometimes “patient to a fault”. He finished by highlighting the importance of the city to him. “It was in a city where I met some of the most influential people in my life.”

Roberta Jamieson was the first Aboriginal woman to earn a law degree in Canada and she is an officer of the Order of Canada. She shared seven key messages (I have simplified them of course):

She talked a lot about making space for indigenous people in cities. “Make space for us in the city and the city will be richer for it.” She also highlight the fact that many cities take their names from indigenous languages. “This is not a coincidence,” she said.

“The human city, the real city, is built of relationships, not of concrete and steel.”

Clayton is the MOU team lead of Treaty 6, 7, and 8. He shared a number of statistics about Aboriginal people in Alberta, such as the fact that there are 48 First Nations and 148 reserves in Alberta. Most of his presentation was focused on the importance of treaties and the need for improving education. “Treaties are about relationships and responsibility,” he said. He said Alberta has two systems of education – the provincial one and the band-operated one (there are 58 band-operated schools in Alberta). He spoke about the MOU and their efforts to improve education for Aboriginal youth. “All parties have a collective stake in improving First Nations success,” he said. “Let’s not lose another generation.”

Bob is the former premier of Ontario and is an officer of the Order of Canada. He spoke about the misunderstanding that is at the heart of Canada. He said it is important to understand the context in which the treaties were signed – the Crown’s perspective was “to draw a line in the sand,” he said. It wasn’t a marriage, it was a divorce – it was about saying what isn’t allowed and about what is lost. “The only way to get to a better place is by understanding from whence we have all come,” he said. For Bob, that better place is a country “that is not based on some people thinking they are better than others.”

He also talked about the fast growing urban Aboriginal population in Canada. “As a country we now face a choice: do we celebrate this and make it work and make it happen or do we continue to see it as a problem, a difficulty, an inconvenience, a nuisance?”

Jessica is the national youth representative for the Congress of Aboriginal Peoples. She spoke about “edgewalkers”, her term for Aboriginal youth who “have no patience for the status quo” and who have “a hunger to contribute to a better future.” She said that “indigenous issues are Canadian issues.” Jessica pulled no punches, saying “to hell with fitting our round peg in your square hole.”

She also addressed the potential of Aboriginal youth. “Aboriginal people are some of the most innovative leaders coming out of this generation,” she said. “They are the future of our cities.” She urged everyone to go find the edgewalkers in their city. “They are everywhere.”

CBC Edmonton’s Mark Connolly closed the evening with some final remarks. He was very open about how much he has learned in the last ten years or so, starting with Treaty 6. “I’m so pleased that now wherever I go, we speak of Treaty 6,” he said. Mark challenged everyone to think about how they could contribute to a broader understanding of the topics discussed during the evening. “It’s Edmonton that came forward here and I think we can make a difference.” 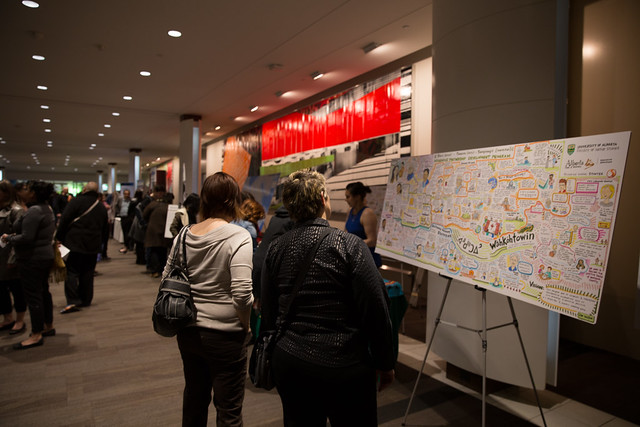 I really enjoyed the presentations. The Walrus promises that their Talks series “delivers fresh ideas and new ways of looking at big issues” and on that I think the event delivered. We’ve been hearing for years that Edmonton is going to have the largest urban Aboriginal population in Canada soon, but why wait until we achieve that milestone to have a productive conversation about what it means for our city?

Every speaker tonight gave me something to think about. I learned quite a few things and came away with a better understanding of some of the challenges and opportunities. The question now, as always, is what the 1,200 people that heard those presentations will do with that information! Taking Mark’s advice, I will continue to learn and to share.

Before and after the presentations, guests were treated to an Aboriginal Art Exhibit in the Hall D lobby and around the edges of the hall itself. Produced by Dawn Marie Marchand and Dawn Saunders Dahl, the exhibit featured the work of ore than 30 Aboriginal artists from Western Canada. It was funded by the Walrus, EEDC, and the Edmonton Arts Council. You can learn about the presenting artists here. 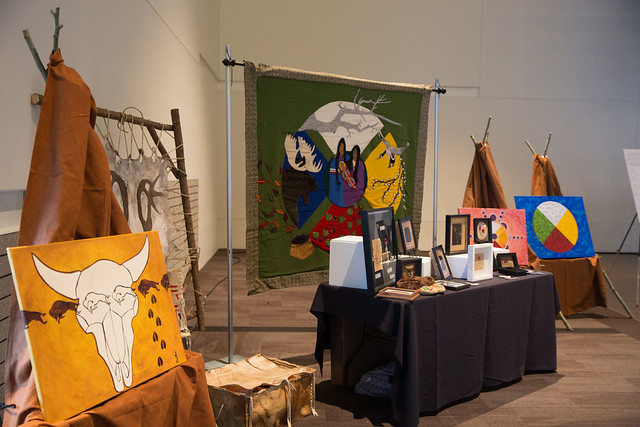 I considered staying home tonight to watch the Leaders’ Debate but decided I’d miss more by skipping the Walrus event. I’m confident now that I made the right call. Kudos to Lisa Baroldi and her entire team at Enterprise Edmonton for putting on a fantastic event! You can see a few more photos here.