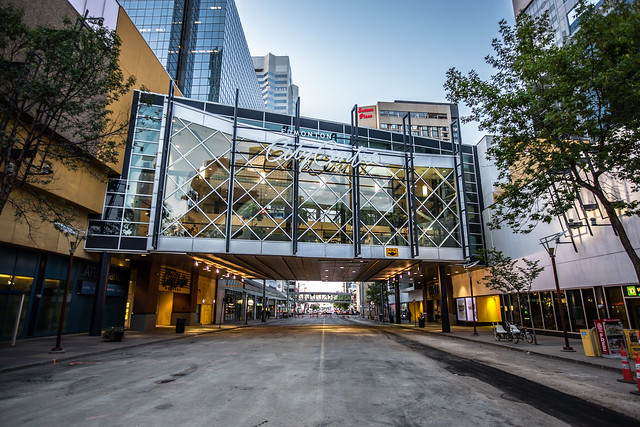 It was 1974 when City Centre Place was completed, part of the Edmonton Centre development across from Churchill Square. The shopping mall we now know as Edmonton City Centre has had an interesting history, to say the least. TD Tower was added to the complex in 1976, and Oxford Tower and the Sutton Place Hotel followed in 1978. As Christopher Leo notes (archive), downtown was the place to be back then:

In the 1970s, downtown Edmonton was the retail centre of the metropolitan area, and the city had a policy of sustaining that role by supporting the viability of residential neighbourhoods near the centre of the city and placing limits on the amount of permitted suburban shopping centre development.

The development of West Edmonton Mall by the Triple Five Corporation in the 1980s had a significant negative impact on downtown Edmonton, and on the City Centre mall in particular. The policy limiting suburban shopping centre development was forgotten. As a result, efforts to restore life to downtown began and Triple Five came along with a solution: Eaton Centre. Christopher has documented the ups and downs of that project very thoroughly, so suffice it to say that what was eventually built in 1987 was a mere shadow of the original vision.

The two malls staggered along until 1999 when the Eaton’s chain went bankrupt. It was around that time that Randy Ferguson came to Edmonton on a mission to straighten things out. He remembers his boss at Oxford Properties, Jon Love, telling him two things before he left. “Go get the job done in the best interest of the community and this company,” and “remember one thing: that’s my hometown”. Randy’s journey began on January 2, 2000.

“There was very little energy downtown,” he recalled. Eaton Centre and Edmonton Centre had separate identities. Thinking back to the amount of space they took up downtown Randy told me how he felt: “it was depressing.” He had a job to do however, and his first task was to convince the Oxford board that they should spend money in Edmonton, their weakest market. “We said, don’t think about this as a retail play.” Randy pointed out that 40% of the office space downtown fed into the property. Four office tower lobbies and two hotels directly. The board gave Randy the go-ahead, but with a budget of just $44 million.

Randy and his team made a number of big changes over the next few years. Randy felt that a department store facing Churchill Square was inappropriate, so they convinced The Bay to move to the other side of the mall, to the vacant Eaton’s location. They turned the basement of the now empty east side into a parkade, and managed to attract Sport Check, Winners, and CBC. There were challenges along the way, of course. In the fall of 2001, Randy had arranged to have the western executives in charge of CBC’s TV and Radio divisions come to Edmonton so that he could pitch the idea of consolidating CBC’s properties in the mall downtown. The morning of the presentation was September 11. Needless to say the deal didn’t happen until many months later!

Merging the separate Eaton Centre and Edmonton Centre identities was an important aspect of the redevelopment. Randy wanted to do something architecturally to combine the two properties, and thought about a pedway bridge. “I think our bridges are terrible,” he told me. “They’re ugly, utilitarian, and generic.” In fact, Randy dislikes our pedway bridges so much that he pitched the idea of wrapping each one in scenes depicting the events taking place at the 2001 World Championships in Athletics. Unfortunately, the City didn’t go for it.

Randy wanted the bridge joining the properties to be more than just a pathway, he wanted it to be iconic. That’s how he came up with the wide bridge concept. “I wanted it to become the meeting place,” he recalled. “You know, ‘let’s go for coffee…meet me on the bridge!’” He envisioned a Starbucks and a patisserie on the main level of the bridge, with the rest of the space available for seating. They built a second level as well, a space that Randy thought would make an excellent wine bar. “We put two circular staircases on the bridge, ran power, and even roughed in plumbing.” As it turns out, Randy’s vision was never fully realized. “It has never been programmed the way I imagined it.” Today the bridge is home to a Tim Horton’s, a Telus Mobility kiosk, and a few retailers including a Bell store. The second level is empty and inaccessible. That’s unlikely to change anytime soon, due to the leases that are in place.

Randy and his team had to be creative in order to achieve everything they wanted with the redevelopment project, which was finished in 2003. “We accomplished an $80 million spend on a budget of $44 million,” he said. He had spent some time studying funding programs elsewhere in North America, and came across a tax increment financing (TIF) project in Florida. “I liked it because it had a direct connection to rehabilitating the area, and it had a sunset, it wasn’t forever.” Randy worked with Al Maurer, City Manager and Randy Garvey, then the GM of Finance at the City of Edmonton, to see if he could make such a program work here. Alberta’s CRL legislation didn’t exist yet, so they could only apply the tax increment from the City to the project, the school taxes could not be touched. They followed the sunset model, whereby 100% of the tax increment went to the project in year one, 90% in year two, and so on. Randy thinks it might be the first example of a TIF used in Alberta.

When the time came to build the wide bridge, Randy again was out of money. Recognizing that it technically wasn’t on land that Oxford owned, they applied for a local improvement levy. The City studied the legislation and agreed that the funding mechanism was appropriate, so that’s where the money for the bridge came from. Further funding for the redevelopment project came through the creative use of a Commercial Mortgage Backed Security, something that would never happen today given the current recession.

Given his history with the concept, I asked Randy for his thoughts on the idea of using a CRL to help pay for the downtown arena. “I am a huge fan of CRL or TIF – it can make things happen that otherwise wouldn’t.” He doesn’t think the proposed formula is the best one, however. “I believe the school tax portion of CRL should be sacred, it shouldn’t be in play,” he told me. Randy also feels the sunset approach is better than 100% for 20 years as the current legislation allows. “We need to benefit from that growth, along with the guys that are making the investment.” He suggested that the City should get some local experience at the bargaining table, someone like Randy Garvey.

Randy supports the proposed arena project, even though it is competition for ProCura where he is COO. “It’s about critical mass. It’s about creating a new day.”