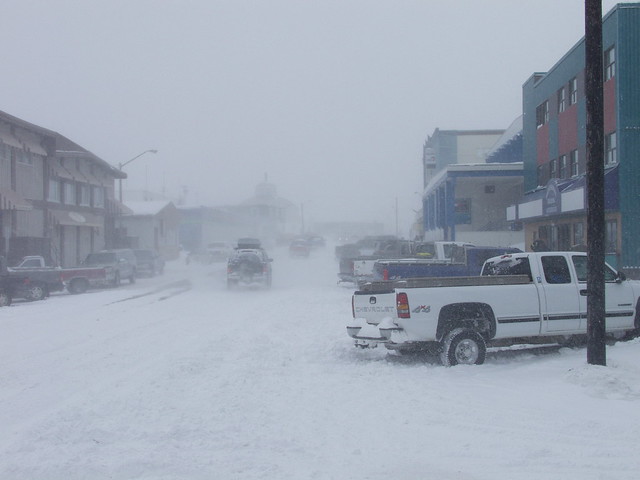 Tagged as the “Gateway to the North”, Edmonton has also been described as “a northern city of art and ideas”. Yet its northernness is often overlooked in understanding the city and region, as well as its connection to the “south” and other northern places.

As someone who grew up primarily in Inuvik, NT, this panel caught my eye. I was quite familiar with the idea of Edmonton as “a northern gateway to the south” – something the panelists talked about. Here are my notes:

Another interesting concept came up in the questions. Mark had said that before moving to Edmonton, he had never lived away from the sea. And while Edmonton doesn’t have a traditional port, we are something of a “port city” thanks to Fort McMurray and other northern communities. I immediately thought of the Port Alberta initiative as well.

What I took away from the session is that being a northern city is much more a mindset than anything else. There are physical elements of course, but it’s the intangible part of being in “the north” that has probably had the biggest impact on Edmonton’s development.

Nope, this isn’t about global warming – sorry activists (don’t you know most of that global warming stuff is hogwash anyway?) – it’s about Inuvik, where my parents live. Well, Inuvik and Aklavik. For those of you who don’t know, Inuvik is a planned town, created because Aklavik used to flood all the time. It’s been about fifty years since it last happened, but Aklavik has completely flooded again, forcing an evacuation:

River water started to flood the community Friday, and many roads are still underwater. The hamlet declared a state of emergency, flying 300 people, mostly seniors and children, out of the community over the weekend. Most of the evacuees are staying at Inuvik’s army barracks, while others are staying with relatives.

Apparently the water is really high in Inuvik too, according to my Dad:

There were ice chunks the size of cars. There were trees of all sizes. There was a 1000 litre fuel tank. There was a telephone pole. The annual spring break-up of the Mackenzie River is under way and it takes anything that stands in its way with it. This years break-up has the river higher than I have seen it before in my 16 years here.

The other interesting thing about break-up is that prices rise temporarily, as goods must be flown up. Normally trucks can drive up, crossing the river either using a ferry in the summer, or just driving right over the ice in the winter.

Hopefully the break-up will be over quickly. My Dad has a good set of pictures if you want to check it out, complete with telephone poles floating in the river!