“The University has long desired to establish a significant campus in downtown Edmonton.”

That’s the first thing the Edmonton Downtown Academic and Cultural Centre (Galleria) business case from April 2013 identifies under opportunities and benefits for the University of Alberta. It sounds plausible, given the ongoing interest in revitalizing downtown and the University’s desire to play a role in the larger Edmonton community. But is it really true?

“Officially, a downtown campus isn’t an option. I’ve spoken to U of A President Rod Fraser, to University Provost Doug Owram, and to Jim Mitchell, the university’s vice-president of facilities. They all tell me it would be too expensive to build downtown, much more than developing land they already own in Garneau or southwest Edmonton. They say it would be too hard to find suitable space for labs and large lecture theatres. They say students and staff would feel isolated from campus life and facilities. They say it’s not their mandate to save downtown, but to serve the best interests of the U of A.”

That was around the time that the University of Alberta’s Long Range Development Plan (LRDP) was being developed (approved in 2002). It provides “a planning framework to accommodate and to guide physical development on University lands during the next thirty years.” Though it focuses on land and facilities that the University already owns, it does deal explicitly with the idea of a downtown campus:

Though the plan has been amended a few times over the years, notably to incorporate Augustana Campus and most recently to incorporate updated plans for South Campus, that section has never been changed. “South Campus will accommodate much of the growth of the University of Alberta for the next thirty years” is what the most recent amendment says.

Even in 2005, when the University announced plans to buy the Hudson’s Bay building, it was not seen as a first step toward a larger campus in downtown or a change to previous plans. New President Indira Samarasekera said “the University of Alberta is a contributor to business, arts, and other sectors,” adding “we have an obligation to the community that we take seriously, and a downtown presence will build on that.” A few years later at the official opening of Enterprise Square, she said “that the University has finally crossed the river and found a place in the heart of the city is very significant” but also admitted that “it initially scared the heck out of me; we took a leap of faith.”

It was with some surprise then that Provost and Vice President Academic Dr. Carl Amrhein posted the following on the University of Alberta’s blog yesterday:

“The Galleria project is more than much-needed space for the University of Alberta—it is consistent with the university’s vision of an urban, linear campus connected by LRT where students, faculty and members of the public move freely around the city to access world-class teaching and research experiences offered at Edmonton’s post-secondary institutions. Imagine the vibrancy that 5,000 art, design and music students, faculty and staff will bring to the downtown core. Imagine the potential when students and professional artists interact through linkages with the Winspear, Citadel and Art Gallery of Alberta. The creative energy will be palpable!”

That seems to contradict not only statements by earlier University officials, but also the LRDP. Had the need for “an integrated campus environment” changed? Had the disadvantages about paying rent changed? Did student leaders now find a downtown location desirable? I reached out to Dr. Amhrein for clarification.

“There’s a technical point,” he told me, “which is that the Long Range Development Plan is concerned with real estate that the university owns and controls.” Given that the U of A would be leasing space inside the new Galleria project, it wouldn’t necessarily contradict the plan. He recognized the larger point however, and said “the argument for integrated locations is ease of mobility and the ability to move people around in a certain amount of time.” That’s where the LRT comes in. 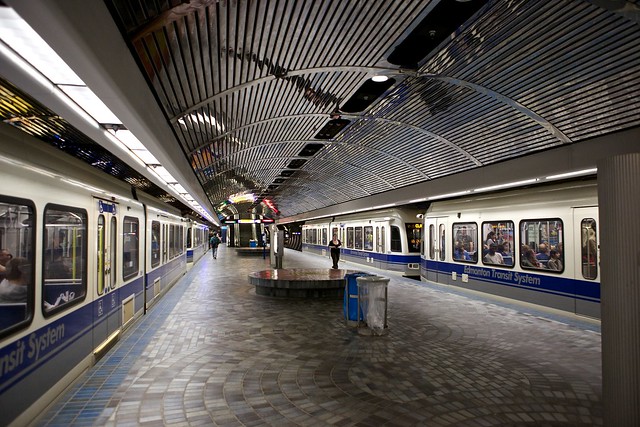 “The feature that made Enterprise Square imaginable was the LRT,” Dr. Amrhein told me. “It meant that it was no more difficult to get from HUB to Enterprise Square than it was to get from HUB to South Campus.” He said the U of A’s first question then about the Galleria project was, “is there an LRT stop?” As both Churchill LRT Station and MacEwan LRT Station are close, the goal of an “urban, linear campus connected by LRT” is achieved at the Galleria, according to Dr. Amrhein.

In his blog post, Dr. Amrhein reiterated the University of Alberta’s key requirement for the Galleria:

“Yes, the university has identified climate-controlled access to the Galleria from the LRT as critical for our students, faculty and staff, and the patrons of the performances at the Galleria theatres and concert halls. A pedway is one solution, but there are others.”

He sounded annoyed that the pedway had become such a touch point in discussions about the Galleria. “The pedway is not a deal-breaker for the University,” he told me. Only “climate-controlled access” is a requirement. When I asked him to suggest alternatives to a pedway that could meet that requirement, initially he dodged the question. But asked a second time, he suggested the position of the buildings could provide the required access, citing the Telus towers and their connection to the LRT as an example. “Clever positioning with a plus fifteen would achieve the same result,” he said, noting that the project architects would have to rethink their plans to make that happen.

Dr. Amrhein told me the University requires climate-controlled access for three reasons. The first is the need to move faculty, staff, and students around campus in short periods of time. “When it’s dark and cold, there’s a disincentive to move around the facilities,” he said. The second is safety, which Dr. Amrhein said has been “completely lost in the conversation.” He stressed the importance of safety, saying that pedways are “well-lit and heated, and very visible” and that they often include security features. “There’s a personal safety issue here.” The third is accessibility of the performance venues for the community. 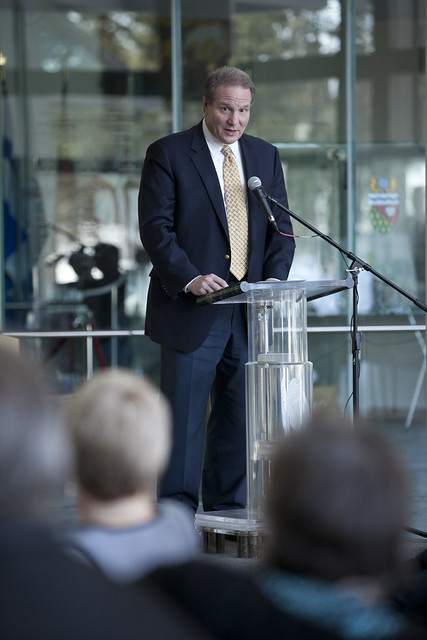 Back to the central question – why does the University of Alberta want to be part of the Galleria project? To answer that, Dr. Amrhein brought up Mayor Mandel and his vision to have all of Edmonton’s post-secondary institutions integrated and connected by LRT. “Imagine a medical student at NAIT,” Dr. Amrhein said. “That student can move from the classrooms at NAIT to the labs at the Walter MacKenzie Health Sciences Centre because of the LRT.” Integration across institutions like that would “put Edmonton in a very small group” of cities, Dr. Amrhein said.

It’s clear that Dr. Amrhein views the University’s participation in the Galleria project as something that will help Edmonton as a whole. “I hope it goes ahead.”

One thought on “Why does the University of Alberta want to be part of the Galleria project?”