The task force for the elimination of poverty in Edmonton got underway last March. Mayor Iveson spoke about the initiative in his State of the City address, and a week later City Council formally established the task force. A lot has happened since then, and the year ahead looks to be an important one. Here’s an overview of the work that took place in 2014 and a look at what’s to come.

Following the establishment of the task force, the Mayor’s Symposium on Poverty was held on March 20, 2014. Roughly 130 Edmontonians came together at the Shaw Conference Centre to discuss the new task force and to “tap into the wisdom of the community to set the foundation” for its work. Mayor Iveson opened the event, and said “this may be the most extraordinary Make Something Edmonton of all time.”

Guest speaker Dr. John Rook spoke about ‘The City that will End Poverty’, sharing insights and stories from his experience leading the plan to end homelessness in Calgary. He praised the mayor for making poverty elimination a priority, and said “I know with your bold leadership that Edmonton will be a city where poverty is not an enigma.” You can read his full remarks in the symposium report. 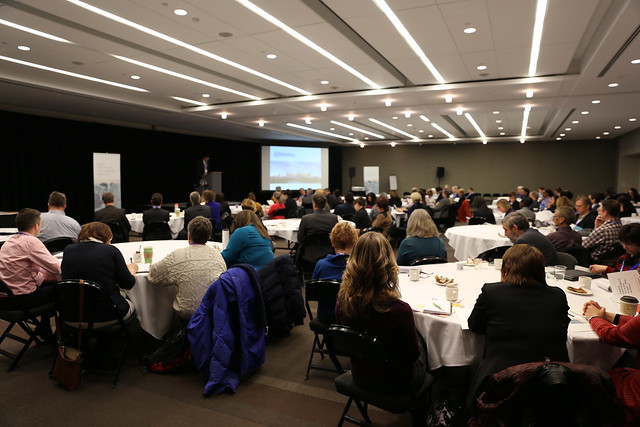 Afterward, the crowd broke into smaller discussion groups to talk about some of the key themes, like health or transit. The report includes a summary of their discussions, as well as some broader conclusions:

“The overarching goal of ending poverty, however, is an ambitious one. The importance of advocacy and lobbying with all orders of government surfaced throughout the discussion groups, because in many cases a wholesale policy shift will be necessary in creating the kind of change that participants talked about.”

I attended and had some great discussions throughout the day. I left feeling optimistic but also very aware of the incredible amount of work ahead.

The Mayor’s Task Force to Eliminate Poverty in Edmonton met eight times in 2014 – you can find the meeting agendas and minutes here. They also established two round tables, one focused on Information & Research and one focused on Aboriginal Edmontonians, which met five and six times, respectively. Finally, a Communications and Engagement Committee was established (which I am a member of) and met a few times.

Over the summer, the task force established working groups as an approach for involving more Edmontonians in the creation of recommendations for eliminating poverty.

An orientation event was held on August 26 where community stakeholders were brought up-to-date on the work of the task force and a discussion was held about the focal areas that would form the basis of the working groups. Six were established:

In the fall, a 7th working group was formed, focused on Justice and Democratic Participation.

Each working group consists of roughly one to two dozen participants, and they have all met a few times throughout the final part of the year. Their work will continue throughout the early part of 2015, with the goal of finalizing recommendations for the task force by the end of March.

Ever since they brought the program to Edmonton in 2012, the United Way has hosted poverty simulations to help educate Edmontonians about what it’s like to live in poverty. In May, I co-hosted one of the simulations with Omar Mouallem. A few dozen young professionals joined us at the Shaw Conference Centre for the event.

The program has certainly evolved since I first participated in November 2012, but it’s just as eye-opening as ever. Again I was struck by the importance of transportation and the challenges that people living in poverty face as a result. I was also reminded of how hard it can be to live near the poverty line, where you’re just once unfortunate situation from not making ends meet.

I ran into a couple of young women after the event was over, and they admitted that they were skeptical before attending. How could a simulation do justice to those who live in poverty? Fortunately they found the experience educational and positive, and were glad they attended.

For upcoming poverty simulation dates and to learn more, check out the United Way website.

Live Below the Line

The Global Poverty Project held a five-day challenge in late April called Live Below the Line to live on just $1.75 per day for food and drink. Mayor Iveson, members of his staff, Councillor Knack, and Councillor Walters all took part. Together they raised more than $2200 for Raising the Village. The mayor spoke about the challenge on BT Edmonton:

Mayor Iveson wrote about his experience and said “this first-hand understanding of malnourishment has been extremely revealing.” He was glad at the awareness the challenge raised and said his “resolve both as Mayor of Edmonton and as a global citizen is only further strengthened to take action to eliminate poverty.”

In September, the task force adopted its working definition of poverty:

“Edmontonians experience poverty when they lack or are denied economic, social and cultural resources to have a quality of life that sustains and facilitates full and meaningful participation in the community.”

You can read the full document which includes context, assumptions, a discussion on measurement, and an explanation, on the task force website.

The goal of the task force is to bring a draft poverty elimination plan before City Council in June. There’s a lot to do before that can happen.

The Edmonton Social Planning Council was contracted in the fall to develop a profile of poverty in Edmonton. The document will outline facts on poverty and will examine the pattern of poverty in our city. The profile is “also intended to provide benchmarks to monitor progress” of the poverty elimination plan. A draft was circulated toward the end of the year and it should be posted soon.

The working groups will present their recommendations to the task force in March, after which the task force will have to work to develop goals, outcomes, actions, and an implementation strategy. Throughout the spring, the poverty elimination plan will be drafted and a presentation for Council will be prepared. I understand a series of public engagement opportunities will take place along the way to help with that work.

The Communications and Engagement Committee has begun work on a new website for EndPoverty Edmonton. The goal is to be able to provide regular updates on the work of the task force, to engage Edmontonians who want to get involved, and to create a resource that will live on past the creation of the plan.

The task force will also need to consider what happens after the plan is approved by Council. How will the plan be implemented? How will we engage more Edmontonians to join the cause and to take action? These and other important questions will be tackled in the months ahead.