I spend a lot of time at my desk. Many of us do these days, with software eating the world and all. That’s why I’ve put some effort (and money) into creating a more ergonomic workspace. I’ve focused on three main areas for this: the keyboard and mouse, the chair, and the desk itself. Fortunately it wasn’t pain or discomfort that prompted these changes and hopefully by making them proactively I’ll remain pain and discomfort free! 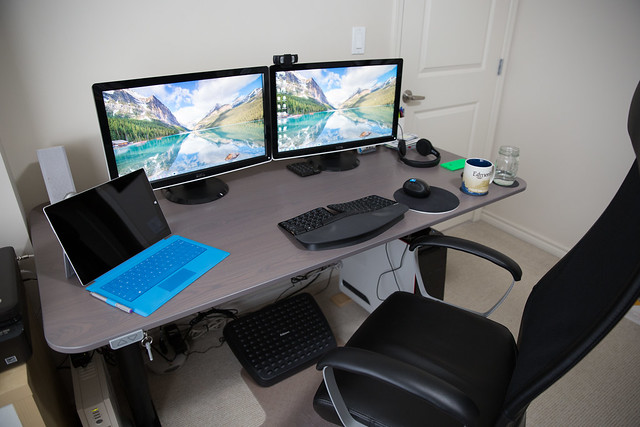 I started with the keyboard and mouse, which I have written about previously. I went with the Microsoft Sculpt Ergonomic Keyboard, which you can get on Amazon for just over $100. An ergonomic keyboard definitely takes some getting used to, but I would never go back now. I do end up typing quite a bit on my Surface Pro keyboard when I’m not at home, but after a while I definitely find myself missing the Sculpt Keyboard. If I’m going to do a serious amount of typing, such as when I’m writing a blog post, I try to make sure I’m using it. It may not be the most ergonomic keyboard you can get, but it does tick a lot of the boxes for an ergonomic setup like the palm rest, split design, and natural arc. The mouse too has the thumb scoop and height to ensure your wrist is in a more comfortable position. Overall I’ve been very happy with this setup.

The next thing I decided to improve was my chair. For years I had been using a pretty basic office chair from Staples. It worked fine and did have a curved back which offered some support but after years of abuse it was starting to show its age. It was time to replace it anyway, so getting a more ergonomic one just made sense.

I read quite a bit about office chairs (or “task chairs”) and the different factors you should look for. I very quickly realized that if I wanted to, I could spend thousands of dollars on a chair! I decided my budget was going to be quite a bit less than that, hopefully below $500. I read a lot of reviews, but this one from The Wirecutter had a big impact on my decision. Their recommendation was the Steelcase Leap, but at around $1000 it was a bit too rich for me. Fortunately they also had a strong recommendation for a less expensive chair: the Ikea Markus Swivel chair which you can get for about $229. Here’s what they wrote:

“I don’t think the Markus would be a bad choice for someone who would never consider paying $800 for a chair, no way no how. It definitely never felt like my chair the way the Leap or the Embody did, in large part due to that limited adjustability. And I strongly believe that most people would find the Leap or the Embody far more comfortable than the Markus, in an immediate sense and over time. But in terms of the ergonomic criteria mentioned by the experts above, the Markus will be sound for most, except perhaps the tallest users.”

I’m definitely not the tallest person so that didn’t worry me. And it does have less adjustability than other, more expensive chairs; you can’t adjust the lumbar support, the head rest, or the depth of the seat pan. But other than that, it more than meets my criteria for an ergonomic chair. I’ve been extremely happy with it! I particularly like the mesh back and how thin it is. I didn’t think I’d like the headrest, but after months of use I’m sold. 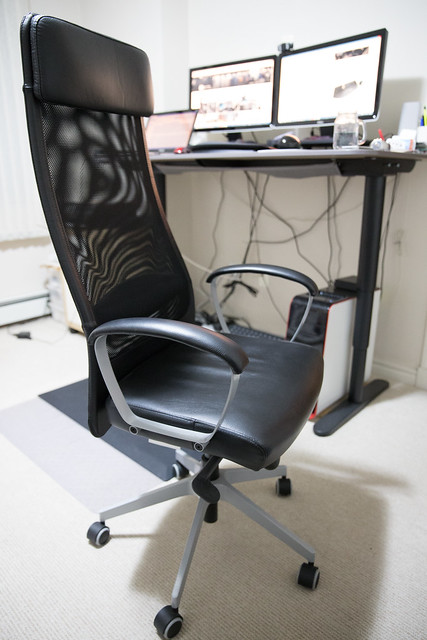 Of course, sitting properly and getting the benefits of a well-designed chair is easier said than done. I know it’s important to sit as far back in the seat as possible, so that my lower back is against the lumbar support. But even with the ability to recline, I found myself slouching too often. So I added a footrest and that made a huge difference. Now when I’m sitting at the desk, I make sure my feet are up on the footrest and it helps me ensure I’ve got the correct posture. It’s a simple change, but it made a big difference.

You know what they say: sitting is the new smoking. I didn’t need anyone to tell me that sitting too much is bad, of course. Getting up and walking around has always made me feel better. I tend to pace when I’m on a call and I often try to go for a walk after sitting for a while. It helps to both clear my head and to keep my energy up.

Still, I have long wanted a standing desk. I’ve seen them in other offices and was always immediately jealous. I tried to approximate a standing desk on more than one occasion, using the counter, boxes on a table, whatever. But I wanted the real thing. While I again did a bunch of research on standing desks, I was pretty set on getting the Ikea Bekant Sit/Stand Desk from the moment it was announced. Not only was it electronically adjustable from 22″ to 48″ at the press of a button, it was less than $1000! Just like a good chair, standing desks can cost multiple thousands of dollars. For my first one, I wasn’t prepared to spend that much.

The only problem is that Ikea seems to have been plagued by supply issues. As I write this, the desk I bought isn’t even listed on Ikea Canada’s website anymore (the normal one, not the corner or five-sided which both still appear). For months it appeared but showed no inventory. Eventually I decided to just ask in the store itself and discovered that while the tabletops are available in self-serve, the motorized underframe is only available from the back warehouse. I was able to pay for it at customer service and then just had to wait for a few minutes while it was brought out to me. The frame cost $500 and the tabletop was another $90. That’s an amount I was comfortable spending for my first standing desk! 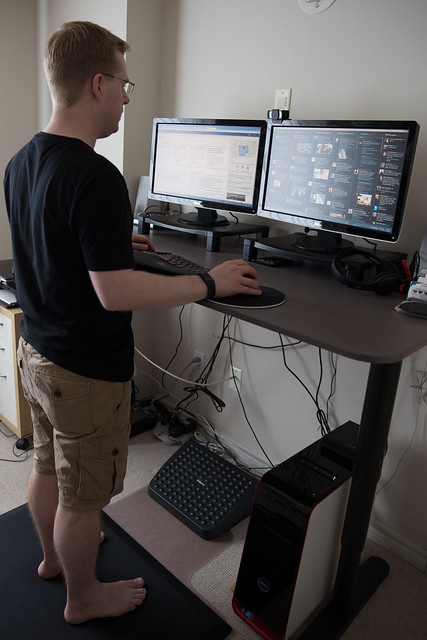 I’ve had it for about a month now and I love it. And yes, I really do switch between standing and sitting quite a bit.

I had read a few comments online that suggested it was a little wobbly, and while it is indeed less stable than my previous desk, it’s far from an issue. I have it setup right on the carpet and I barely notice it, on a more solid surface I’m sure it would be even less noticeable. The desk is a bit bigger than my previous one, but it feels like it takes up less room because of the open sides.

While the desk itself has a pretty smart design to hide its own cables underneath, I didn’t think about the impact of having a height adjustable desk on my other cords. With my previous desk, I had them zip-tied to try to keep things tidy, but with the standing desk they need to have enough give to allow the desk to move up and down. I still need to think of a better solution to make my setup look cleaner, but it’s fine for now.

I can see how it would be handy to have presets, which is a feature some of the more expensive standing desks offer. But on the other hand it’s great to be able to move the desk up or down ever so slightly too. I can generally adjust the height into my “sitting” and “standing” heights using landmarks (the lightswitch on the wall, the armrests on the chair, etc.). It’s pretty impressive to me how quick moving the desk up and down is. 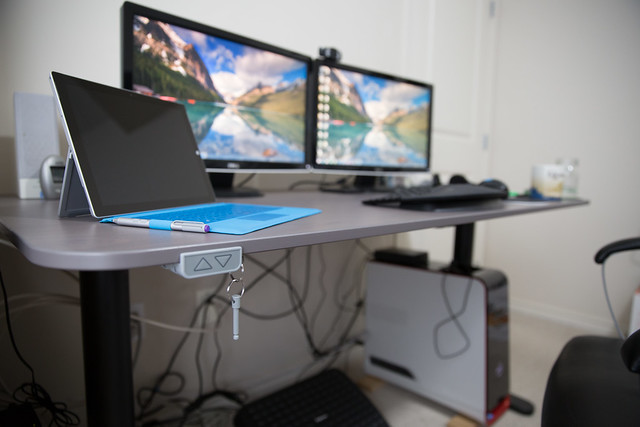 I did make two additional changes to try to improve the ergonomics of my standing desk. The first was to add risers to lift the monitors up a bit higher (unfortunately mine are not height adjustable on their own and I’m not ready to replace them yet). Without the risers, I was looking down at the screens too much (don’t let the angle of the photo above fool you). I may raise them higher still, I’m still experimenting with that.

The second was to get an anti-fatigue mat. I went with the Imprint CumulusPro Commercial Grade which was a bit more expensive but was totally worth it. It’s surprising how much of a difference it makes when you’re standing for any length of time! I do of course have to move the mat when I want to switch into sitting mode, but this only takes a few seconds and as a bonus I move it into the kitchen where we’ve also enjoyed using it.

I find myself standing most in the early part of the day which also happens to be when I’m generally on Skype. It’s especially handy now that we have started using video at work so much more. Without the standing desk, I couldn’t pace as I like to do when I need to be on video. Having a standing desk means I can still move around and remain in frame.

Perhaps the most surprising thing about my standing desk is how much Sharon has used it! It’s been weeks since she last used her laptop on the dining room table (her preferred desk). Fortunately the Bekant is large enough at 63″ x 31.5″ that we can both fit comfortably side-by-side with plenty of room to spare.

Overall I’m really happy with my setup right now. I have better posture and I can easily switch between sitting or standing.