I’ve been looking through all the Ward 12 candidate websites (well, those that have websites) to find information on their platforms. As expected there are a few common themes, but not a lot of detail.

I’d say the top three issues that candidates talk about is community safety, transportation, and fiscal responsibility. Nearly every candidate says they want to reduce crime, improve roads or transit or both, and ensure citizens receive good value for money. Quite a few candidates mentioned reducing or eliminating poverty and/or homelessness, but never as a top priority. 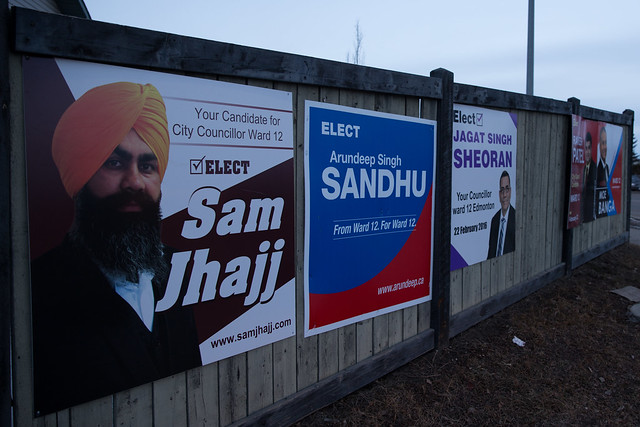 Most candidates mention the Valley Line LRT one way or another. Some like Brian Henderson highlight the importance of LRT expansion, while others like Jag Gill say that the Valley Line needs oversight to ensure it is completed on time and budget. Don Koziak would “reallocate LRT funding to improve vehicular traffic flow.” David Staples spoke with a number of candidates on this issue, as did Vue Weekly.

I thought that the Vehicle for Hire issue would come up more, but only Moe Banga, Dan Johnstone, Nav Kaur, Balraj Manhas, and Nicole Szymanowka mention it on their websites. Many candidates shared their thoughts on Uber with Metro Edmonton, however.

Some eye-catching ideas include Mike Butler‘s “sky train idea”, Dan Johnstone‘s pledge to donate $10,000 of his salary, and Jason Bale‘s pledge to spend just $100 on his campaign. Shani Ahmad, Sam Jhajj, and Balraj Manhas, and Steve Toor all talk about fixing potholes. Mike Butler, Jag Gill, and Dan Johnstone all mention photo radar and either reviewing or banning the program.

There are four candidates that actually provided some details behind their platform priorities. It’s one thing to say that you support improving transportation, for instance, and quite another to provide some ideas on how you’d go about doing that. I certainly don’t agree with all of the ideas presented, but I appreciate that these candidates made the effort to go a bit deeper.

Jason Bale wants to increase the fines for speeding in school zones, implement free 24-hour public transit, install city-wide video surveillance of public areas, and bring esports to Edmonton to boost tourism. If elected he would work to establish a cap on the amount election candidates can spend. I like his idea for saving money on signs, but unfortunately the weather hasn’t been cooperating: “In lieu of producing costly lawn signs, I am asking my supporters to write ‘100’ in the snow in front of their homes and businesses.”

Irfan Chaudhry would work to create incentive-based structures within agreements to ensure projects are complete on time and budget. He would work with EPS and the Chief’s Advisory Council to improve public safety. He would support creating share social spaces (such as community gardens) and would work with universities and colleges to enable the donation of unused U-Passes to the “Donate a Ride” program. He would work on developing “Edmonton for All”, a strategic plan for making Edmonton a welcoming and inclusive city, and he’d help Administration establish a Local Immigration Partnership Council.

Lincoln Ho has perhaps the most specific and wide-ranging list of priorities. He wants to establish text-to-911 for everyone, widen major roads and add additional access points to the Anthony Henday, add trams to the public transit mix, and utilize land along the Anthony Henday for urban farmland and large scale community gardens. He’d also like to implement free transit to the river valley, create specially designed parks/playgrounds for pets, vary speed limits on Whitemud Drive, and use traffic circles instead of traffic lights in new developments.

If “progressive issues” are your jam, then check out the analysis from Progress Alberta. If you think gender diversity and women’s initiatives are importance, check out the Women’s Initiative survey. Metro Edmonton asked candidates for their thoughts on the police budget. And in case you missed it, here’s my candidate survey on Edmonton as an open, transparent, accountable, and engaged city.