Tonight with more than 1.4 million votes cast, Alberta elected an NDP government making Rachel Notley our 17th premier. And to the surprise of many, the polls turned out to be pretty accurate this time. After 44 years in power, the longest unbroken run in government at the provincial or federal level in Canadian history, the PC’s reign has come to an end. They won’t even be the official opposition – although they earned more votes than the Wildrose, they won 11 fewer seats.

The data in this post comes from my results dashboard. All results are unofficial until May 15 when Elections Alberta is expected to announce the final results. And it could very well change, as we have a tie currently in Calgary-Glenmore between the NDP’s Anam Kazim and the PC’s Linda Johnson.

The NDP won with 54, Wildrose came second with 21, and the PCs finished third with 10. And here’s what the popular vote looked like:

We’ll have to wait to see what the final numbers are like, but voter turnout is not going to be much different than it was in 2012 at 54%. My guess is it will in the range of 53-57% when the final results are published.

The NDP won support from across the province, picking up 14 seats in Calgary, 19 in Edmonton, and 20 from other parts of Alberta. Here in Edmonton, they won every seat by no fewer than 4400 votes:

Also interesting is that the number of female MLAs has gone from less than 20 to 27. A step in the right direction.

It’s no surprise that Jim Prentice announced he would step down as leader of the PC party, but it was a shock to hear that he would resign the seat he won in Calgary-Foothills and would leave public life altogether. I can appreciate that being the public eye takes a toll, but his announcement felt incredibly selfish after all his talk of joining politics again because Alberta needed him.

This was a positive election for the Alberta Party. Not only did they roughly double their vote count from 2012, they elected their first MLA in leader Greg Clark who won in Calgary-Elbow.

Albertans have spoken and the winds of change have swept through the province. Rachel Notley and the NDP ran a solid campaign and they now have a clear mandate to govern. Congratulations to all and much respect for everyone who put their name forward as a candidate in this election.

Today is Election Day here in Alberta! It doesn’t take long to vote, so make sure you head down to your polling station today if you haven’t already voted in one of the advance polls. Here’s an overview of how to vote.

If you need to know where to vote, you can use the tool I built here. It lets you search by address or if you’re on a mobile device in particular, just click “Locate Me” and it’ll figure out where you are. For the most accurate results, simply enter your postal code. Here’s what you’ll see:

Once the search completes, it’ll show you the district you’re in, the candidates you can vote for, and your specific polling station (with pins for your location and for the polling station).

I had built this a week or two ago, but yesterday realized that Elections Alberta has improved their own search tool. Nice to see them making some enhancements. The main difference is that my tool has more information about candidates (such as social media links) and also has integrated results information.

The polls are open today from 9am until 8pm, after which we’ll see results trickle in from around the province. You can watch the results using the dashboard here. It should work well on your desktop, laptop, tablet, or phone!

The dashboard shows some overview information, including the number of polls reporting and the estimated voter turnout, and a chart of votes by party. It has six other key features:

Most importantly, it’ll update automatically as soon as results come in from Elections Alberta. You don’t need to refresh the page or do anything else – just leave it open and watch the data appear!

I hope you find it useful. I’ve done quite a bit of testing with it, but do let me know if you run into any issues. 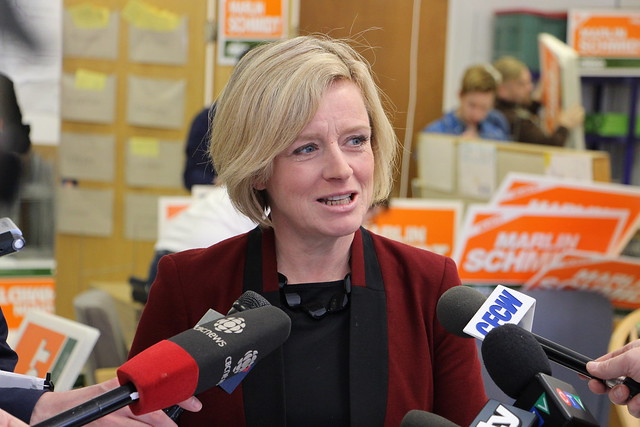