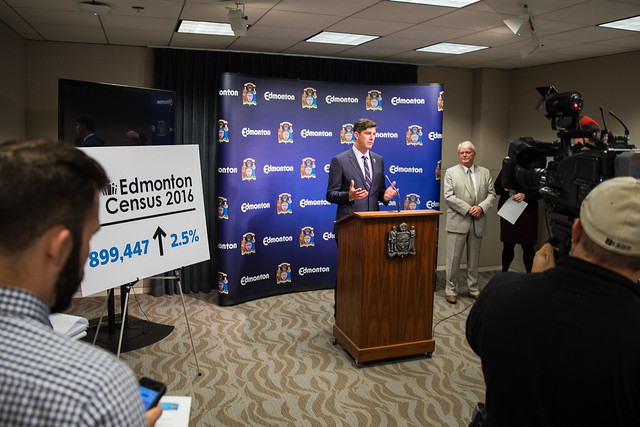 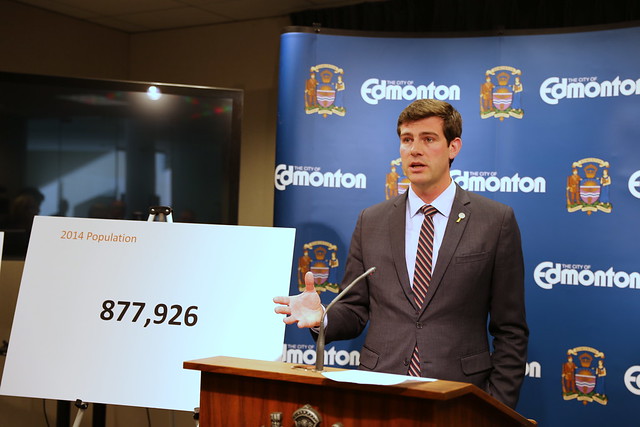 This morning the results of the 2012 Municipal Census were released, and Edmonton’s new official population is 817,498. That represents annual average growth of about 12,000 since 2009 when the last census was conducted.

Mayor Mandel seized on the numbers related to age – the largest proportion of residents are in the 25-34 demographic (about 14.5%):

“The growth in population indicates that Edmonton is a city of opportunity,” said Mayor Stephen Mandel. “It is gratifying and exciting to know that so many young people are calling Edmonton their home. This reinforces the appeal of Edmonton, and the value of what our City has to offer; opportunity, culture and quality of life.”

Here’s a look at the population by age group:

One of the new questions asked this year was about mode of transportation from home to work. The results are not incredibly surprising – roughly 80% of Edmontonians get to work by automobile:

You can see all of the results here, including PDFs for each ward and neighbourhood. Unfortunately I can’t do a detailed comparison by neighbourhood, because the open data catalogue has not been updated and I’m not going to sift through 375 PDFs to get the data I need. A note on the website reads: “2012 results will be added to the Open Data Catalogue in early August.” While I suppose it’s a positive that the data will in fact be uploaded to the catalogue, there’s absolutely no excuse for it not already be in there. I feel like I’m fighting the same fight, three years later.

I was most interested in Downtown however, so I did look at the PDF. The population increased far less than I had anticipated, rising to 12,199 from 11,572 (growth of about 5.4%). In other words, just 1.8% of the city-wide population growth occurred in the Downtown neighbourhood. Clearly we still have work to do (perhaps surrounding neighbourhoods grew more, will wait for the open data to analyze that).

Last year City Council passed a new Municipal Census Policy which states that a census will be conducted every two years starting in 2012. Throughout the month of April, census workers knocked on doors asking Edmontonians a variety of demographic questions. The results are important because many grants from other orders of government are calculated on a per capita basis. Additionally, the City needs updated numbers to effectively plan services, and to ensure ward boundaries result in fair representation by population.

The next Municipal Census will be held in April 2014.