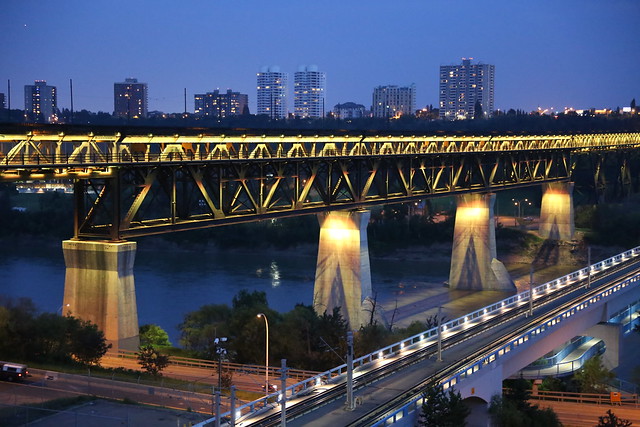 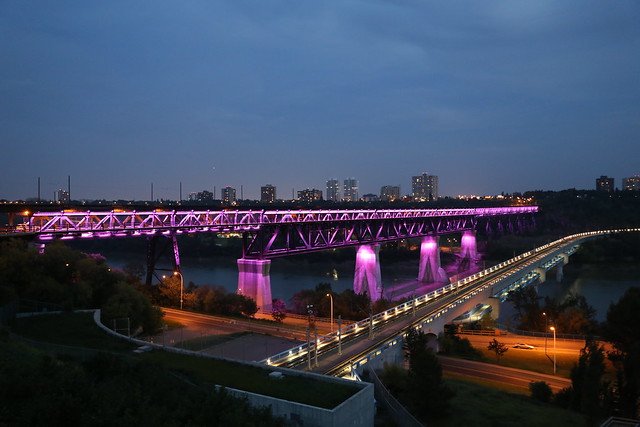 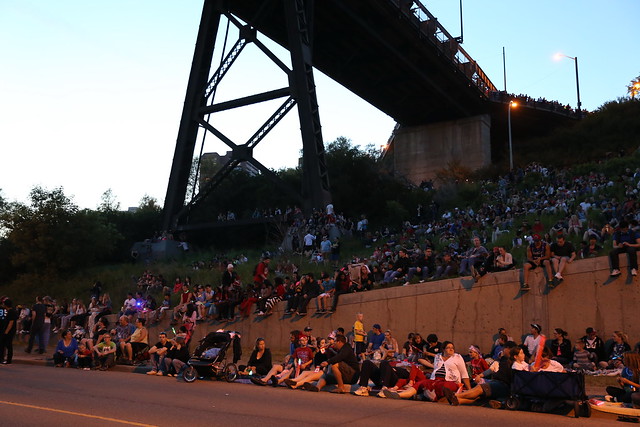 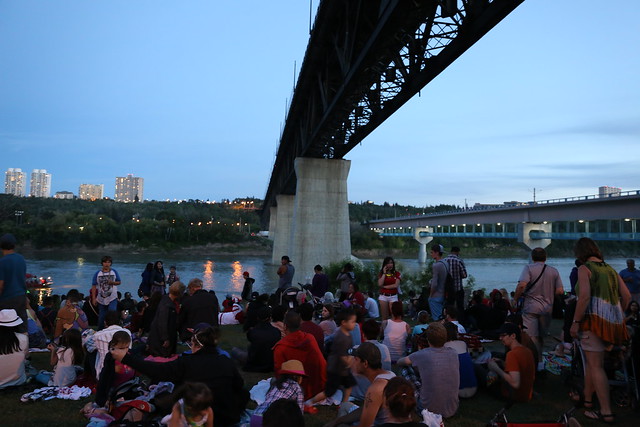 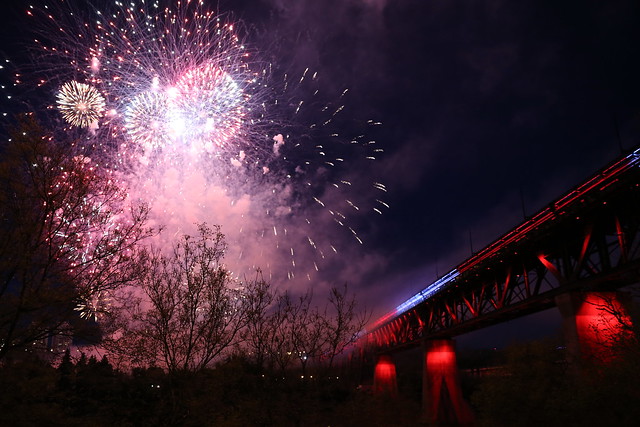 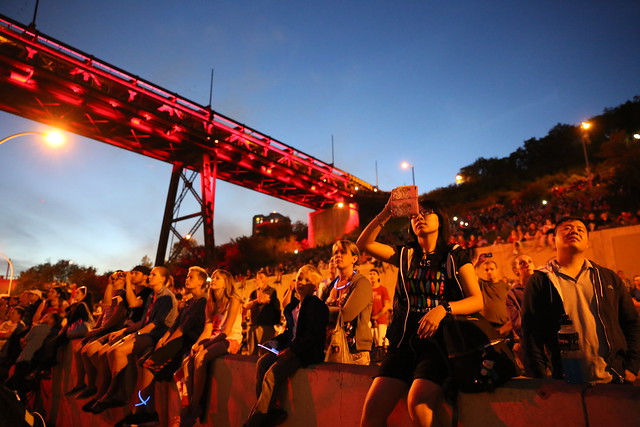 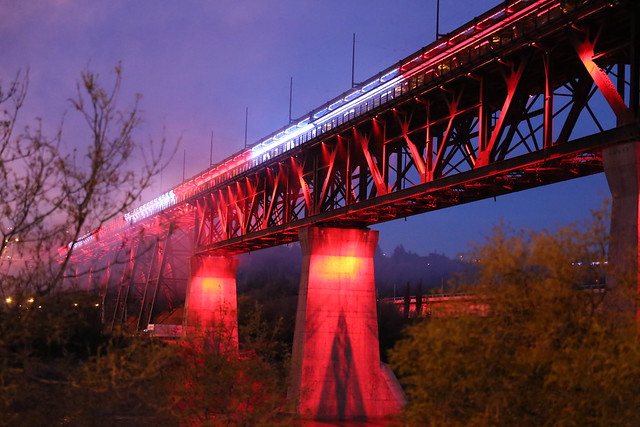 Last year the City of Edmonton completed work on the new Fort Edmonton Footbridge. In addition to the bridge, the $28.2 million project included 2.5 km of access trails and stairs and a secondary bridge crossing at Wolf Willow Ravine. The design was selected to achieve the objective of “better design in a world class city.” Here’s what it looks like (from the east side looking west):

David Staples wrote about the new bridge in August, and both Sharon and I made a note of the article at the time. He wrote:

“The most beautiful structure you’ve not yet seen in Edmonton, the new Fort Edmonton Footbridge, now spans the North Saskatchewan River. It is a testament to the city’s new vision to invest in attractive infrastructure, not just the same old ugly.”

We had to see it for ourselves! A number of other recent “sightings” only increased our desire to check it out (a friend’s wedding photos and one of EIFF’s 24/ONE videos were shot there). Last weekend we finally made time to go. I fired up Google, and quickly arrived at this page on the City’s website. I was looking for an address or directions or something, but all that page offers is the following:

There’s also a link to this PDF map which shows the proposed design, not the final result. And because it’s a satellite image without labels, figuring out which route to take to get to the bridge is anything but simple. Thankfully, Google does show the crossing:

We still weren’t entirely sure how to get there, but at least that map narrowed it down. It looked closer to park at the end of Whitemud Road (yes, ignoring the no parking signs) and walk rather than driving into Wolf Willow, so that’s what we did. There’s probably a better way to get there. Oh how we need trail maps data in the data catalogue!

The drive/walk to the bridge was interesting, as the neighbourhood is full of mansions! The trail from Whitemud Road to the bridge is situated in between two very large houses. Must be nice to have the bridge in your backyard!

The bridge itself is beautiful. As you can see it is highest in the middle, so the incline upward from each shore combined with the cables gives it a nice effect in photos.

I’m also a fan of the asymmetrical layout, with one of these lookout points on the northwest side of the bridge and another on the southeast.

The trail to Wolf Willow Ravine on the west side of the bridge is very pretty. There were a bunch of photographers using the trail when we visited, including one taking what appeared to be engagement photos for a young couple.

I had no idea Wolf Willow Ravine even existed until our trip. It was a crisp and cool when we were there, and so quiet. Sharon remarked that she felt like we were in Banff – it was certainly a different side of Edmonton than we’re used to seeing!

You can see the rest of my photos here. Go visit the Fort Edmonton Footbridge when you get a chance. It’s a bit of a trek to get there, but it’s worth it!

Now that the snow has melted, litter is once again visible on our streets and sidewalks. That means it’s time for a big push by Capital City Clean Up (CCCU), the City of Edmonton’s year-round litter and graffiti management program.

On Wednesday, Mayor Mandel kicked off the latest CCCU initiative, called the 15 to Clean Challenge:

“The responsibility for keeping our city clean is shared by all of us. If we all took 15 minutes to clean up litter or wipe out graffiti, imagine how much of a difference we could make together,” said Mayor Stephen Mandel. “Edmontonians take pride in their city and show it by participating in events like this.”

Participating in the challenge is easy. Just take 15 minutes to pick up some litter or call 311 to report graffiti. Challenge your friends and co-workers and go as a group! When you’re done, log your clean up activities online (you have until May 16 to do so).

I took part in a clean up group last year and had lots of fun! Last year was a great year for CCCU. Here is 2009 by-the-numbers:

River Valley Clean Up kicks off next week (on ShareEdmonton) – you can learn more here. If you’d like to Adopt-a-Block, you can do so here.

Fifteen minutes is all it takes! Get out and help to clean up Edmonton!

Now that I’ve had a chance to think and talk to a few people about yesterday’s LRT route announcements, there is one aspect in particular of the Southeast LRT route that I am quite excited about.

I think the answer is a big yes (minus the high-floor, underground, elaborate stations…low-floor FTW).

If you look closely at the recommended route for the Southeast LRT corridor, you’ll notice that it goes from downtown through Louise McKinney Riverfront Park and across the river to the Muttart Conservatory (where there should be a stop).

Did you catch that? The LRT will go through the crown jewel of Edmonton, the river valley!

A low-floor, urban style LRT route from downtown through the river valley opens the door to all kinds of possibilities. Most obviously, it makes the river valley accessible to all – no more talk of building an incredibly expensive funicular. More significantly, it creates the potential for some development along the river valley. Think riverfront restaurants, pubs, and other attractions. Don’t get me wrong, I don’t want to turn our river valley into an outdoor West Edmonton Mall or anything like that, but I do think that we often fail to make the most of what is perhaps our best asset. I think an LRT stop at the Muttart Conservatory could spur a number of interesting ideas and concepts.

Now to be clear, this isn’t guaranteed to happen. They could still switch the stations or even potentially the route. And I don’t know how they plan to get from downtown down to the river. There are a lot of unknowns. Still, I think the potential for this is incredible. That’s why I’m excited about the Southeast LRT route, and why I think you should be too!