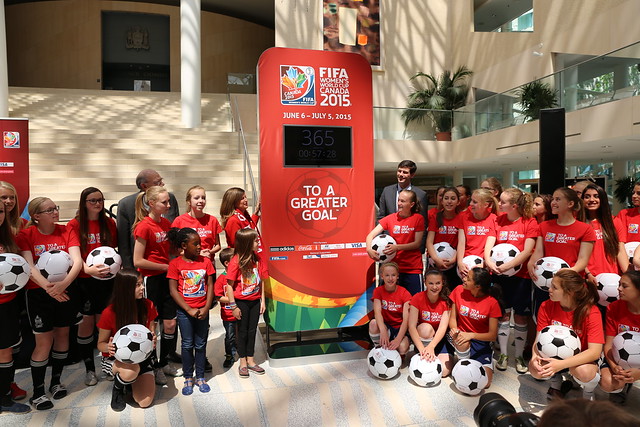 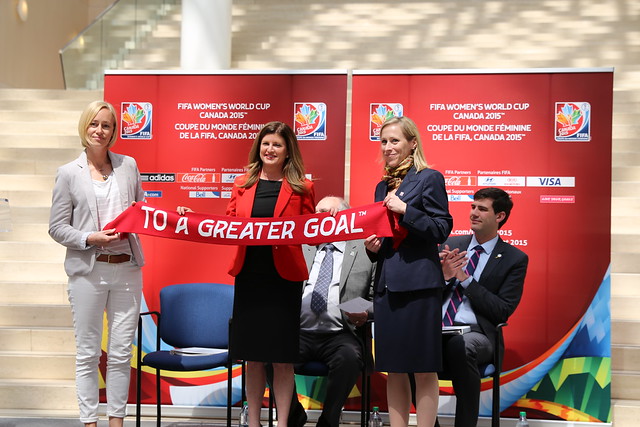 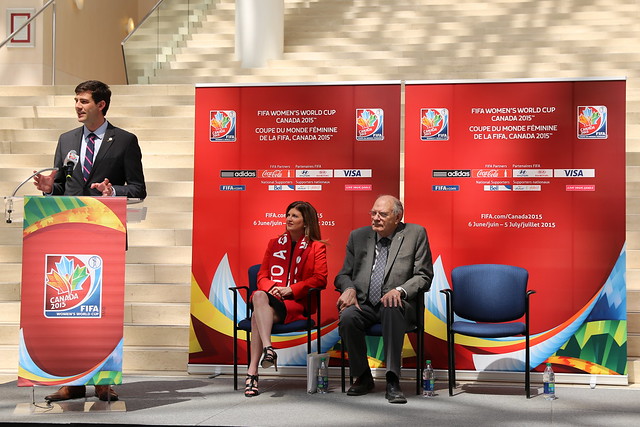 Tonight I went to Commonwealth Stadium with Megan to watch an exhibition Major League Soccer game between the Vancouver Whitecaps and the Los Angeles Galaxy. I hadn’t really been paying attention I guess, so didn’t realize the event was happening until Megan asked me last week if I wanted to go. I said yes, curious about how soccer would go over in Edmonton and of course, about David Beckham.

He didn’t score a goal, but he was awarded an assist. The Galaxy ended up losing 2-1, but it could have been far worse if not for their keeper. Vancouver was clearly the stronger team tonight. For more on the game, check out CBC.

Every time Beckham touched the ball, the crowd would cheer! It was kind of funny and kind of annoying all at the same time. At one point everyone started doing the wave. Megan and I couldn’t help but think, “this isn’t a hockey game!” For the most part though everyone seemed to be having a good time (despite the intermittent rain), and very few left after Beckham was replaced in the 75th minute.

While walking to the LRT station after the game, we ran into the crowd of people waiting to catch a glimpse of Beckham getting on the bus to leave the stadium. We hung around for a while and eventually saw him emerge, but the photos didn’t turn out so well. He signed a few autographs, but disappeared rather quickly.

In the end, I’d say that soccer is more enjoyable on television (keeping in mind that I’ve never been to a game in say, Europe). I eagerly await the World Cup, for instance! Bringing the exhibition game to Edmonton probably had the desired effect though – to capitalize on Beckham’s popularity as a way to introduce more people to MLS.

Here are my pictures from the game.

My sister and I came down to Red Deer last night to visit Tom. He’s on the Kings soccer team, so we figured we’d come down to watch his game today. Today is the second last game of the season, and I think it’s fair to say that the Kings are looking forward to the end. After placing third in the province last year, they haven’t done so well this year! You can see the current standings here.

The game isn’t until noon, but I came down to the college with Tom this morning anyway. I figured I’d do a little work so I came to the library which is where I am writing this post. I am connected to their public wireless Internet network, and I have to say, I am really impressed. The speeds are just amazing for a wireless network, and I haven’t had any connectivity issues whatsoever. That’s far more than I can say about the wireless network at the UofA (granted, it has far more traffic than the one here).

I was so impressed actually, that I ran a speed test at DSL Reports:

When you convert those numbers, it works out to roughly 227 KB/sec download, and 90 KB/sec upload. Not bad at all. I wish all wireless hotspots were this good!

Kim and I are heading back to Edmonton this evening.

Everywhere in the world right now, football has taken centre stage. Everywhere in the world, that is, except for Canada (where hockey reigns supreme) and the United States (where it’s probably baseball or basketball). Why? Simple – the 2006 World Cup (hosted by Germany) has started, which in case you didn’t know, is the most watched sporting event in the world, yes even more so than the Olympics. In the last World Cup in 2002, the cumulative audience is estimated to be 28.8 billion, with 1.1 billion people watching the final match. Expectations are for this year’s to be even greater. Crazy!

Canada once again failed to qualify for the tournament, which means I’m pulling for England. The good news for England so far is that they won their first game this morning against Paraguay. The bad news is that the win was very unconvincing:

England got the opening win they were looking for, but the performance in the second half was less than convincing. Paraguay can take heart from their battling display, though they had no reward for their efforts.

The lone goal came off a Beckham free kick that was accidentially headed into the net by the Paraguay captain himself. I heard earlier that the goal is the quickest own-goal in World Cup history, and it marked the first time a game has been decided by an own-goal.

The website for the World Cup has got to be one of the best around. Lots of news and features, excellent video highlights of games, and much more. Definitely check it out. They’ve got some great photos too 😉

One thing I’ve really noticed so far is that the 2006 World Cup appears extremely branded. There’s the FIFA/Coca-Cola World Ranking, the adidas Golden Shoe and Golden Ball awards, the Gillette Best Young Player award, and much more. I bet it costs a pretty penny to be an official partner of the World Cup.

I admit that I am a bit of a bandwagon jumper when it comes to the World Cup. That is, unlike my brother and my Dad who follow soccer closely all the time, I really only get excited when the World Cup rolls around every four years. I keep tabs on Manchester United and pay attention to the discussions between Tom and my Dad, but that’s about it. I guess that makes me a bit of a hypocrite in that I complain about the Stanley Cup/Edmonton Oilers bandwagon jumpers, but I contend that the World Cup is something special, over and above hockey. A few million people care about the Stanley Cup, whereas a couple billion care about the World Cup. People all over the world, from all walks of life, it truly brings out the “globalness” of the little community we have here on Earth.

Games will be played over the next few weeks with Stage 1 ending on June 23rd, and the final being played on July 9th. England’s next game is on June 15th against Trinidad and Tobago, who managed to hold Sweden to a draw today.

Looks like the 2006 FIFA World Cup demo is finished downloading on my Xbox 360 (I love the new background downloads), so I’m off to check it out!