There’s a new, hyperlocal magazine now available in Edmonton focused on our city’s central neighbourhoods. The Yards launched last week at an event downtown, and soon it’ll find its way into more than 24,000 mailboxes in the Oliver and Downtown neighbourhoods. A collaboration between the Oliver and Downtown community leagues, The Yards will attempt to document and impact the major changes taking place in central neighbourhoods by redefining what it means to be a community publication.

I attended the launch event last Thursday and have since had the opportunity to speak with Jarrett Campbell, President of the Oliver Community League, and Omar Mouallem, editor of The Yards, about the project.

The core idea behind The Yards is that central Edmonton is special. Downtown has been called “Edmonton’s living room” by more than a few community leaders, and together, Downtown and Oliver are home to many more people than the thousands who live there; thousands more work, eat, shop, and seek entertainment in the two neighbourhoods. Additionally, both neighbourhoods are undergoing significant changes. Multiple new investments, both private and public, are having a major impact and will continue to do so for years to come.

The Yards is a way for the community to chronicle those changes, and to shape the conversation around them. “A newsmagazine gives us the opportunity to showcase why living centrally is not only possible but favourable,” is what DECL President Chris Buyze wrote in his first message in the magazine. “We’re excited about telling our neighbourhood’s stories and discussing it with the broader community,” added Jarrett in his.

The idea initially wasn’t quite as grand, however. When Jarrett became president of the community league in 2012, he had a long list of things he wanted to get done, and while improving and modernizing the community newspaper was on the list, it wasn’t near the top. It wasn’t until about November 2013 that discussions began about what could be.

Jarrett simultaneously led his community league’s effort to handover the production of its newsletter to a third party and led the creation of The Yards, a balancing act which was definitely tricky at times. In the end the community league had to choose between two proposals, one of which was The Yards. “We [at The Yards] operated under the assumption this was going to happen,” said Jarrett, who recused himself from the community league’s decision on the matter. He was confident the idea and team would win the board over. The board’s final decision to move ahead came in July, and The Yards was born.

The Yards is published by the Central Edmonton News Society (CENS) in partnership with the Oliver Community League (OCL) and the Downtown Edmonton Community League (DECL). As a non-profit organization, CENS is made up of volunteers, but The Yards does have paid staff, and they do pay their writers. Omar is the magazine’s editor, while Vikki Wiercinski is the artistic director. No one is involved to get rich. “Everyone is doing this out of passion,” Omar said. “It isn’t lucrative!” 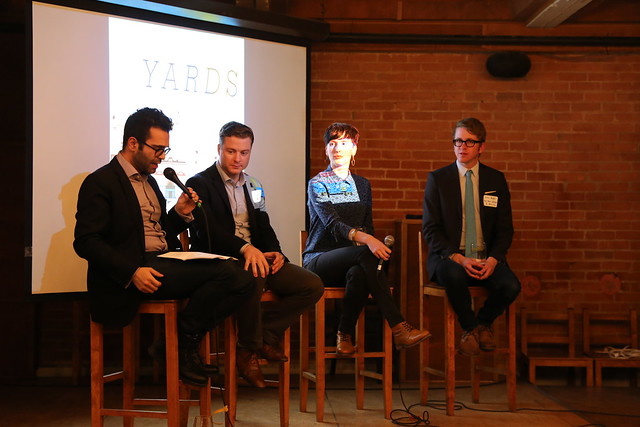 In addition to advertising revenue, The Yards is funded by the two community leagues. OCL contributes $15,000 per year, which is what it was already paying for the community newspaper. DECL contributes another $5,000, and this is the first printed communication it has ever had. It’s the community leagues that make advertising appealing too. Their involvement means the publication can be sent to 24,300 mailboxes, which is far more than other organizations are able to achieve with Canada Post. Combined with high quality content, that distribution is appealing. “The value proposition is there,” Jarrett said.

When I asked why it was important for CENS to be a non-profit, Omar and Jarrett both seemed surprised at the question, as if they couldn’t see it working any other way. “Having a non-profit mandate allows us to support issues in a different manner,” Omar told me. “As a non-profit, we can be advocates.”

As Omar wrote in his first editor’s note, the name “harkens back to the old Canadian National rail yards along 104 Avenue” and serves as a way to look ahead without ignoring the past. On the website, the name is described as “a loving tribute” both to the rail yards and to “the role downtown has always played, as a gathering place for the whole city.” Fitting as it may sound, naming the magazine was no easy process.

“The Yards wasn’t even an option at first,” Jarrett admitted. Names like “53”, “Magpie”, “Centric”, and “The Crux” were considered and voted upon. After one round of voting, no clear winner emerged. That’s when Chris suggested “The Yards”. It wasn’t an immediate hit either. “I really didn’t like it at first,” admitted Jarrett. “But it is growing on me.” Omar loves that the name prompts a conversation with people about the history of the area, but agreed that “it needed to percolate a bit more” before the team felt confident it was the right name for the project.

Each edition of The Yards will contain messages from OCL and DECL, but the focus is on high quality, professionally written content. And while that content will certainly reflect the issues that are important to residents, it’ll go beyond what might have appeared in the old community newspaper. “The reality is many people come to Oliver and Downtown to work, to eat, for entertainment,” Omar said. He wants the magazine to reflect that, and to reach a broader audience.

Whereas the old community newspaper was often made up of submissions from non-profits, the new magazine is “run like a magazine”, to use Omar’s phrase. Instead of accepting submissions (and basically printing all of them), the magazine may choose to interview people to present more context around issues that are deemed worthy of coverage. If there’s an issue the community would like to see covered, they need to let the editorial staff know.

The goal is to have something that is relevant for much longer than the old community newspaper. “You could pick this up in six months and it’ll still be relevant,” says Jarrett. The first issue includes an article on empty nesters considering a move to downtown, a list of restaurant deals that can be found in central Edmonton, an events calendar, “a biography of downtown”, and opinion pieces on a “wet shelter” and designing safer crosswalks.

Omar also sees education as part of the magazine’s mandate. “I want readers to walk away from The Yards feeling like they have increased literacy on municipal issues,” Omar told me.

While you can read The Yards online, it’s currently available only through Issuu, rather than via a developed website with permalinks for each article. But an improved website is in the works, and the team definitely want to have linkable articles. “I’d rather put money into content,” Omar told me. Right now, the focus is on growing the magazine.

“The Yards is modern and very visual,” Omar said. Vikki is largely responsible for that, drawing on her expertise as a graphic designer (she also organizes the popular Royal Bison craft fairs). For the first issue, they worked with local firm Studio Tipi on the illustrations. They’ve worked with Monocle, Alberta Oil Magazine, and many other publications in the past. Their flat, 2D-style illustration on the cover uses a limited color palette and feels both modern and timeless.

Another area of focus for The Yards has been social media. The magazine currently has about 450 likes on Facebook and more than 1000 followers on Twitter. “I think we’re already developing a credible voice on the area for those online communities,” he said. It’s through social media that many people find out about news and events, Omar pointed out, so it’s important for The Yards to have a presence there. 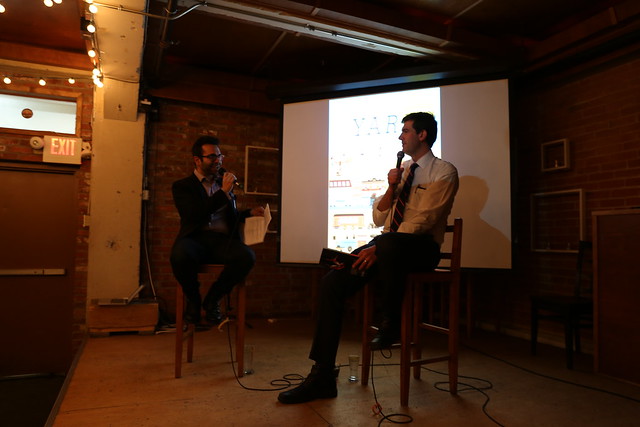 The launch event last week wasn’t just a way to build awareness about the new magazine, but is indeed a sign of things to come. “We’re applying some knowledge from modern magazines,” says Omar, pointing out that they have come to view events as a critical part of a successful magazine. “There’s a lot of value in events, because they bring the community together.” The plan is to host an event with a guest speaker in conjunction with the launch of each new issue.

The interview with Mayor Iveson at the launch event was recorded for The Yards podcast, another component that Jarrett and Omar hope to explore. They’re aiming to do one podcast per month for now, but again, the priority is the magazine and ensuring that grows successfully.

In addition to showing up in the mailboxes of residents in the two neighbourhoods, The Yards will also be available at restaurants, coffee shops, and other businesses in the area.

Though Oliver and Downtown are the communities behind The Yards, the stated aim is to serve central Edmonton, which includes surrounding neighbourhoods like Queen Mary Park and McCauley. “Downtown is all of the intrinsically connected central neighbourhoods,” Omar wrote in his editor’s note. “We believe it does us good to consider the sum of the parts and not get hung up on invisible lines.” It’ll be interesting to see how effectively the magazine reflects those varied communities.

Despite the risks, those involved see The Yards as a better model that will ultimately benefit the community. “For neighbourhoods that are changing so rapidly, the [old community] newspaper is not the best way to engage citizens on the issues,” Omar said. 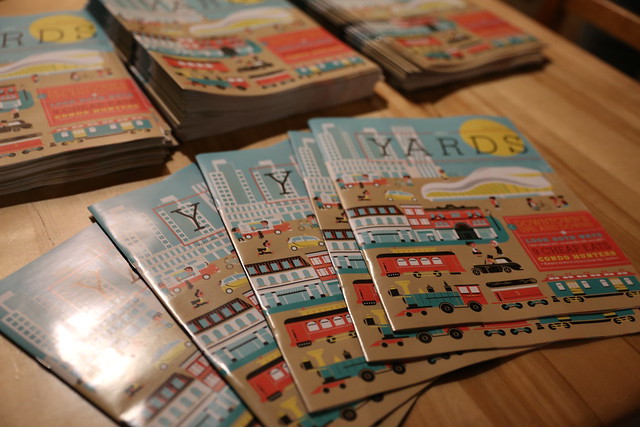 Omar feels the passion of those involved will shine through and will ultimately allow the publication to fulfill its mandate. “We’re civic-minded, engaged, and proud of our community, and we want to share that,” he said. “The magazine is a great way for us to shape the conversation.”

One thought on “Media Monday Edmonton: Meet The Yards”