The winter break is over and Council is getting back to business next week.

Council starts the week with a Community Services Committee meeting scheduled to take place all day.

The situation here is that back in April 2013, a number of festivals expressed concern with the proposed Civic Precinct Master Plan. The City hired a consultant as a result to work to identify changes. Festival groups had issues with being limited to 99 Street for programming, concern about safety when the LRT opens along 102 Avenue, and concern about additional trees resulting in limited movement between spaces. Businesses around the Square are “largely supportive of the principles of the Civic Precinct Master Plan” the report says. In short, the City is going to move ahead with some aspects of the plan, but focused mainly on programming, operations, and governance. Revising and advancing the entire plan is “not recommended” at the moment and will be revisited once LRT construction is complete and the new line is operational.

The Edmonton Arts Council has recommended that eight projects receive funding under the Cultural Diversity in the Arts program for a total of $86,700: May Banh, William Belcourt, Sofia Cristanti, Yong Fei Guan, Todd Houseman, Erika Namsechi, Yukari Meldrum, and Elisa Marina Mair Sanchez. They have also recommended $29,500 in Festival Seed Operating Grants for 2015 for the Edmonton Latin Festival, Relish Film Festival, and Sand on Whyte.

Here are some of the other agenda items that caught my eye:

There will also be a response to an inquiry from Mayor Iveson on charitable donations to Community Leagues, but the report for that is not yet available.

A large number of reports have been rescheduled to later dates so if you were looking for those you’ll have to wait:

On Tuesday Council will be holding its next Executive Committee meeting, also scheduled to go all day. Here are some agenda items that caught my eye:

The recommendation here is that Administration proceed with establishing a municipally owned and controlled for-profit land development corporation “to focus on City-building initiatives in addition to earning profits.” The report includes a 73 page business case for the creation of a Municipal Development Corporation (MDC) prepared by Deloitte. Benefits of an MDC include:

The City currently has 9,355 land holdings across Edmonton, and estimates suggest nearly 200 could eventually be appropriate for the MDC, though roughly 30 would be appropriate to seed the corporation.

A list of possible properties that could be transferred to the MDC will be presented at the meeting, but is not available under sections 24 and 25 of the FOIPP act. Properties within West Rossdale and the Edmonton Research Park are possible candidates.

If Council approves the recommendation to establish the MDC, Administration will return by the end of Q2 with a more detailed business plan for Council’s consideration. The initiative could require up to $2 million in funding over the next two years for startup costs. The creation of an MDC also requires approval from the Province.

The highly anticipated report on vehicle-for-hire regulations and Uber is now available, and while it talks about the regulations and the taxi industry, it doesn’t say much about how the City is going to deal with Uber. The report notes that a 2007 study found that Edmonton should have 17 taxis per 10,000 people, but 2007 was a long time ago and there’s no updated information included. We currently have 15 taxis per 10,000 people, which means we have a shortfall of roughly 177 taxi plates.

The report does talk about some considerations with UberX, including: drivers and vehicles are unregulated, so no background checks are done; drivers with a Class 5 license cannot transport passengers for hire in Alberta; vehicles are not required to obtain a mechanical inspection on a regular basis; and, drivers can carry personal liability insurance rather than commercial insurance.

An attachment called “Options for Edmonton” outlines the following “options that the City of Edmonton could pursue to improve overall taxi services”:

It should be an interesting discussion!

Ballpark Update and State of Baseball in Edmonton

Executive Committee had previously requested information about Telus Field, and this report is the result. “Baseball has been part of Edmonton’s social and sporting scene since the late 1880’s,” the report says. The Edmonton Prospects (a Western Major Baseball League team) played at Telus Field in 2013 and 2014, and are negotiating terms for their 2015 schedule. The report also includes an attachment called The State of Baseball Report, prepared by RC Strategies, which assesses “the current state of professional and high-level amateur baseball in Edmonton.” 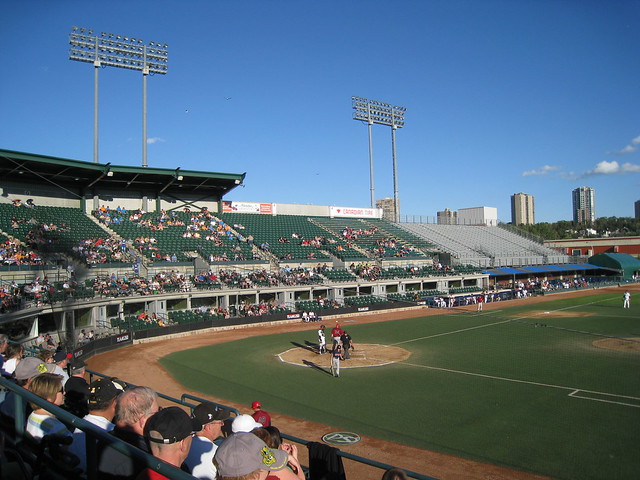 The City owns the ballpark, which it leases to the Oilers Entertainment Group, which in turn subleases it to the Edmonton Prospects. A condition assessment was completed in 2013 and found that an investment of $1.3 million will be required over the next ten years. The report does not recommend any specific action at this time, but suggests that Administration could further explore options including the creation of a business case to make the ballpark more viable, physical changes to the ballpark, and also the implications of removing or replacing it.

This report provides an update on the proposal to “advance the Mechanized Access and the Touch the Water Promenade projects.” Council previously approved $34.4 million for the River Valley Alliance Connective Infrastructure, $24 million of which will go to the West Rossdale Mechanized Access Project with the remainder going to the Touch the Water Promenade. Both projects are required to be completed by 2017. The City will return to Executive Committee in Q2 with another project update.

A few of the other reports include:

Here too, a few reports were delayed:

The next Transportation Committee meeting is scheduled to take place on Wednesday afternoon and to run into Thursday if necessary.

Preliminary Engineering for the Churchill Connection Structure was completed previously, and here’s an aerial rendering of what it might look like:

The successful P3 proposal is expected to be selected by the end of the year, with major construction set to begin in 2016. The Valley Line LRT Stage 1 is not expected to be complete until 2020.

It is expected that 102 Avenue will be totally closed for LRT construction starting in 2016 and lasting until the project is done in 2020. Churchill Square itself will remain open, with only temporary partial closures as necessary. Any closures will be limited to the period from October 1, 2016 to April 30, 2018 in an attempt to minimize the impact on festivals (affects just the 2017 summer festival season).

The Valley Line Public Engagement Plan implementation will include opportunities for meetings, updates, and Citizen Working Groups to discuss the construction and its impact.

This report has not been made available under FOIPP, but the item is time specific at 3pm. Let’s hope that Council hears the line is ready to open soon, rather than that another delay is necessary.

There’s a response to an inquiry from Councillor Nickel on the Customer Intake Model for DATS. It outlines the current policies and procedures for booking DATS trips and provides an update on the process to determine applicants’ eligibility for the service.

Tons of reports have been delayed here:

City Council is holding a Special meeting on Wednesday morning to get an update from Administration on public engagement. They will no doubt talk about the Building the Momentum event which is scheduled to take place on Saturday, January 24 at the Shaw Conference Centre. You can learn more about the Council Initiative on Public Engagement and about Open City initiative on the City website.

Ah, isn’t great to have Council back in session? You can keep track of City Council on Twitter using the #yegcc hashtag, and you can listen to or watch any Council meeting live online.