Edmonton’s 27th DemoCamp took place tonight at the Centennial Centre for Interdisciplinary Sciences (CCIS) on the University of Alberta campus. It was hackathon night at DemoCamp, as more than half the projects demoed were created at a hackathon of some sort.

“MADJAM is an Edmonton-based, year-long event that is made up of quarterly game jams, each associated to a global or local event. At the end of each jam, the games will be judged by our panel of experts and voted on by the public. The developers of the best games will be awarded points. These points accumulate and the developers with the most points by the end of the year will win totally rad rewards!”

Their next event is coming up the week of April 26 – May 3, called GDX Super Jam.

The other hackathon was the HackED Computer Engineering Club Hackathon, which took place on January 31. About half the participants in that hackathon were software based, the other half were hardware based. The hackathon offered $2,000 in prizes and just 24 hours to build something cool. 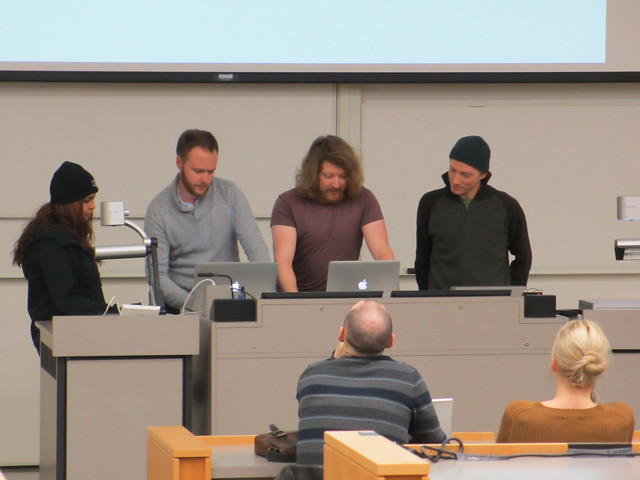 The Bees is a game that has you controlling a swarm of bees after the hive has died. “The bee colony must forge on, in hope of escaping a terrible fate,” the description reads. The team used an iPhone to compose the music, and built their game using the Unity engine. The bees swarm because the emit pheromones, and to keep the game interesting, the team made the seasons change. They focused on what could be done in just 48 hours. Wondering how the game ends? Well no matter what you do, the bees die! In a future version, they’ve talked about maybe having nanobots instead of bees. 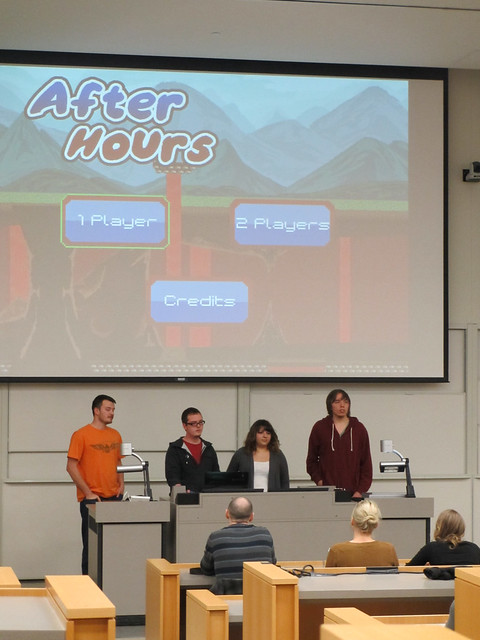 After Hours was also powered by Unity, and is a side-scroller not unlike Super Mario Bros. The team wanted the game “to be tough but fair” and also wanted it to be complete. They decided to do pixel art, because it went well with the music. They added a multiplayer mode too. The goal of the game is basically to make it through the level before the time runs out. If you do, you get to go for a drink! 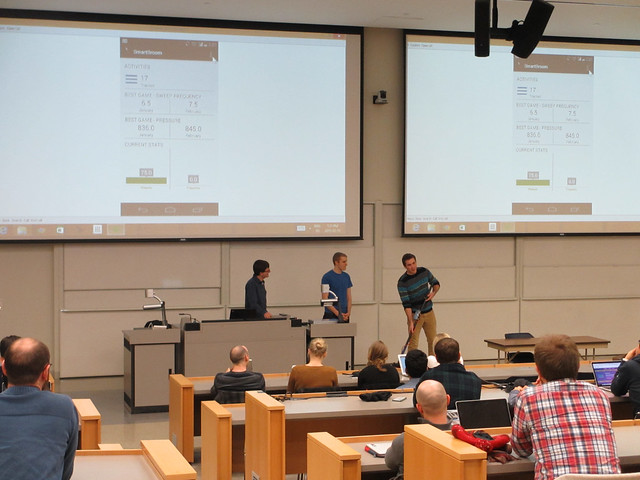 The third demo was my favorite of the night – Broom Blaster. It won second place in the HackED hackathon and is essentially a tracker for curling brooms. Inspired by the Fitbit, Jacob, Jared, Stephen, and their fourth teammate decided to add pressure and motion sensors to a broom that could be paired with a smartphone over Bluetooth low energy. The system tracks both frequency (how many times you sweep) and pressure (how hard you sweep). The team wanted hardware that could be added to an ordinary broom, to make it more cost effective. The app collects the data, and can give training and coaching information. A possible future upgrade? A speaker, so the broom can yell “hurry hard!” at you. 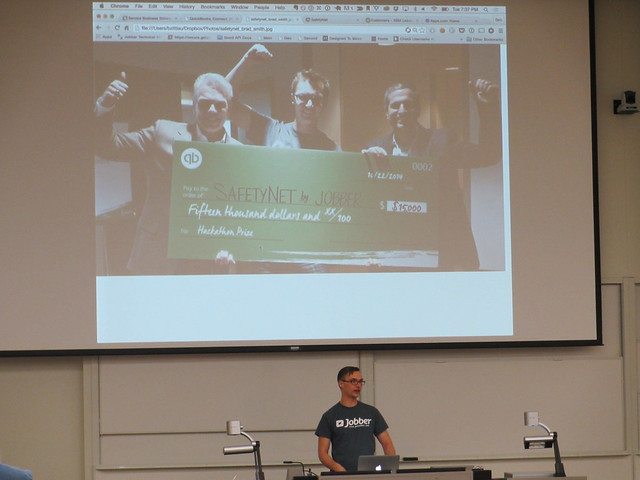 Fourth was SafetyNet by Jobber. Ben demoed his app, which is essentially an online utility to backup your data from QuickBooks Online. He built it at a recent Intuit conference that featured a hackathon and took home the $15,000 prize in the new app category. For some reason QuickBooks Online doesn’t already have a backup feature, so Ben used the REST API to create one. He had just 36 hours to build it, but was able to come up with a simple-to-use but efficient tool. Built in Rails with Bootstrap on the frontend, the app encrypts the data and offers one click to save and one click to restore. 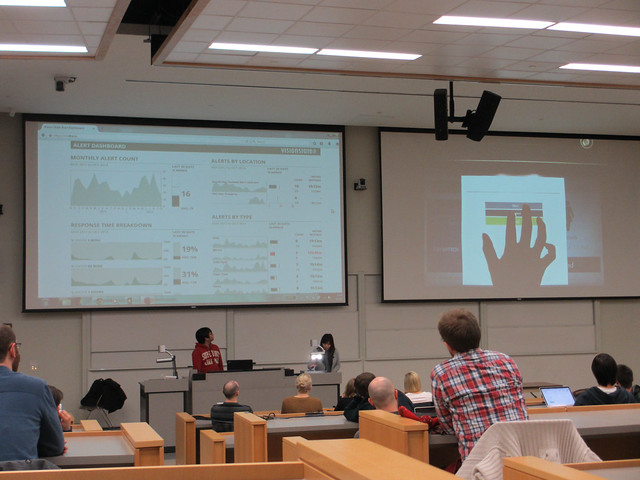 Our fifth demo was WANDA. Built by Visionstate (with some help from Dark Horse Analytics), WANDA is an interactive touchscreen for washroom management. Carolyn showed us how it can be used to give patrons an easy way to submit a request for cleaning or to alert staff that a resource (like toilet paper) is low. When staff go to clean the washroom, they use WANDA to record what they did and when they did it. You’d probably think twice about touch a screen in a washroom, but WANDA features an antimicrobial overlay on the displays. The backend dashboard by Dark Horse lets you make sense of the data, such as determining optimal cleaning times. 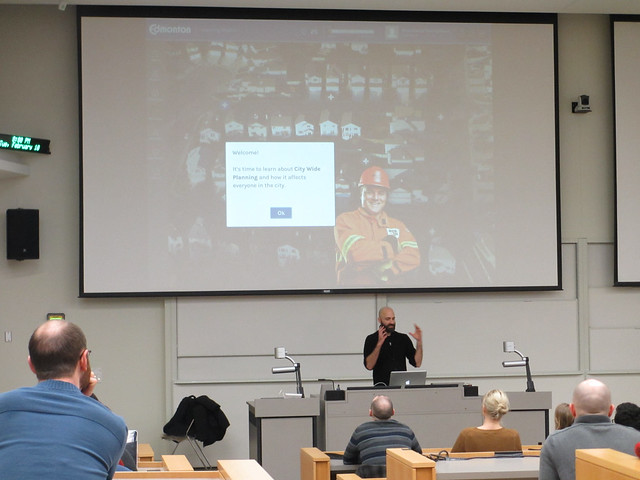 Our final demo of the evening was Trajectory from Rocketfuel Games. Matthew showed us a few examples of how Trajectory can make training and certification much more enjoyable and effective. Instead of just embedding a PDF on a web page and telling new recruits to go read it, Trajectory can make the experience much more interactive. Everything a user does is tracked, including how they take to do it, but that data isn’t visualized just yet – that’s coming next. 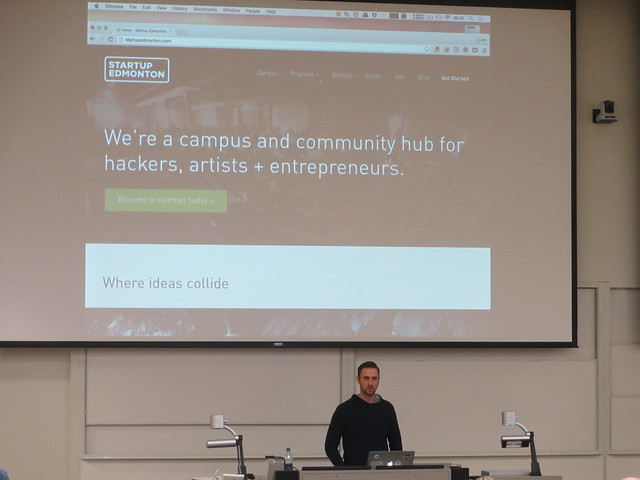 A few upcoming events were mentioned. Startup Weekend EDU Edmonton is taking place at NAIT from March 6-8, and will be a great opportunity for transforming your idea for improving education into reality. The first ever Polyglot Alberta Unconference is taking place in Calgary on March 28 (and will alternate between Edmonton and Calgary). Preflight Beta is taking place at Startup Edmonton again on February 19, and is a great opportunity to learn about the Lean Canvas Model. And finally, on March 21, Startup Edmonton is hosting the Student DevCon at the Shaw Conference Centre. 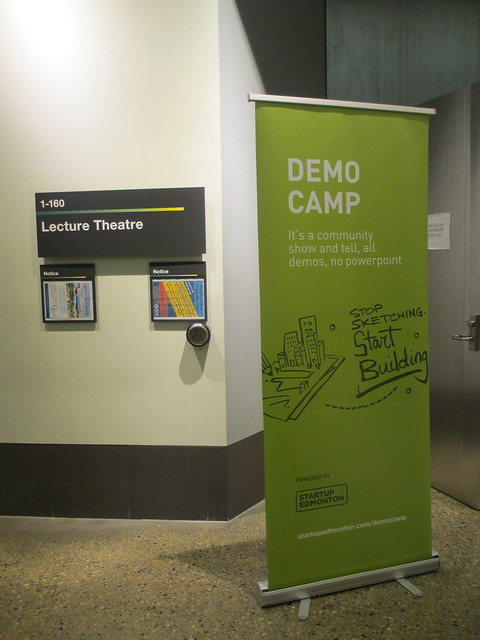 You can see more photos from the event here. See you at DemoCamp Edmonton 28!