From time to time I get invited to review various things here on my blog. I usually turn those invitations down, but sometimes I’m intrigued and agree. That’s what happened back in December, not long after I purchased the Inateck PCI-E to USB 3.0 Expansion Card that I wrote about yesterday. Someone from Inateck emailed asking if I’d be interested in reviewing a couple of their other products. I hadn’t ever come across the brand until I started looking for that USB 3 expansion card, and I was surprised that they reached out so quickly after my purchase. I was happy enough with the expansion card, so I figured, why not? Let’s see what else they’ve got!

They invited me to pick a couple of items off their website to review (and they sent me one of each for free). I decided on the Tool Free USB 3.0 HDD Enclosure (FEU3NS-1E) and the Perfect Laser Pointer Pen for Presentation (WP1002).

An enclosure might seem like a strange thing to want to try, but I have used quite a few over the years. It seems I always have a hard drive that needs attention. Currently I’ve got a few Vantec NexStar enclosures, but nothing with USB 3, and I liked the idea of a smaller one for 2.5″ drives. 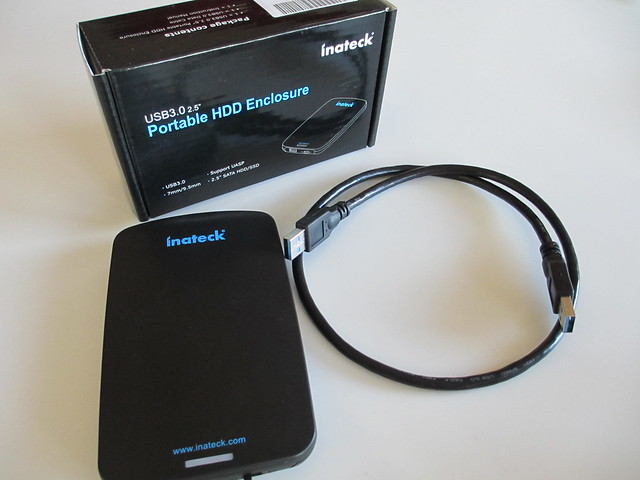 The Inateck USB 3.0 HDD Enclosure comes with the HDD case, a short USB 3 cable, and a user manual (which is completely unnecessary). The enclosure is made of plastic and is really light at just 70 grams. It supports 2.5″ SATA HDDs and SSDs, as long as they are 9.5mm thick or less. For 7mm drives, there’s an extra foam pad that you can use to stabilize the drive.

The main problem with most enclosures is the time it takes to get them open, screw the drive in, and then close them back up again (for temporary jobs, I have started using the NewerTech USB 3.0 Universal Drive Adapter, which is awesome). That’s why the “tool free” nature of the Inateck enclosure really appealed to me. 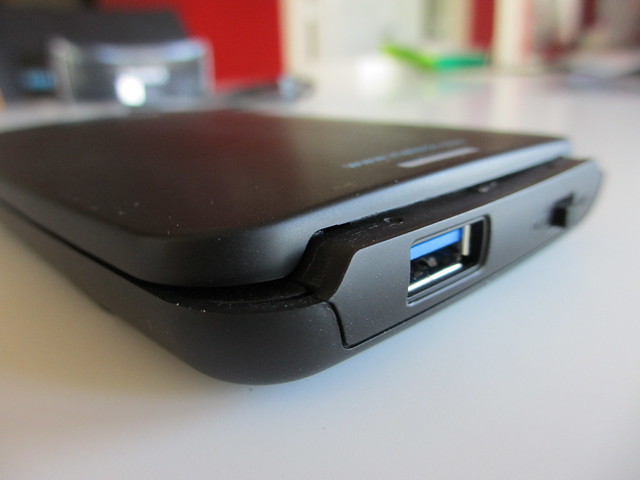 To open the enclosure, all you need to do is slide the top forward. Then you can lift it up, revealing the connector for the drive. To close it, you simply reverse the action. Even though it’s plastic, the build feels solid enough that I wouldn’t worry about it breaking with use (as opposed to say, the plastic releases on the QNAP TS-451 that I recently got). To get the drive itself in, you just need to align it with the connector, and then push. There are two small screws that you could remove if you had trouble with this for any reason (they are the only thing holding the connector to the case…I see that Inateck is now selling the connector as a standalone product basically too).

After the drive is in and the enclosure is plugged in, you simply flip the power switch. There’s a handy LED that comes on too. I have seen a few criticisms of the USB cable, as the enclosure uses the Type-A cable, as opposed to an A to Micro-B that you likely use for a mobile phone. Just don’t lose the cable that comes with it I guess! 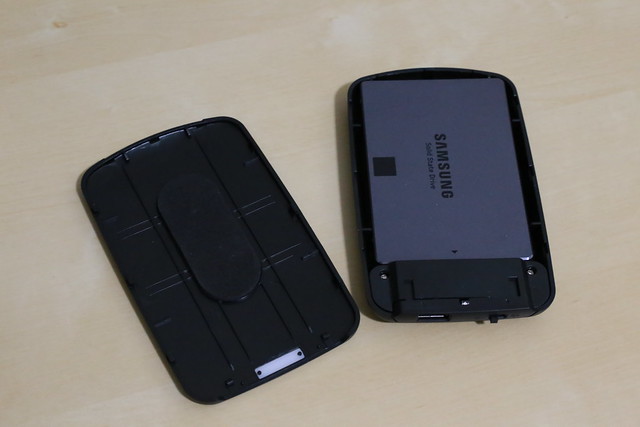 I tested the drive with both an HDD and an SSD. I’m a Windows 8.1 user and had no problem with plugging the drive in – it was recognized right away with no reboot or driver install required. I didn’t measure the transfer speeds, but it was as quick as expected. The enclosure does support UASP (USB Attached SCSI Protocol) if your controller supports it and you’re using an SSD.

The Inateck enclosure is currently just $23.99 at Amazon, which is very affordable. So would I buy one? If I needed a basic 2.5″ enclosure, yes. The main selling feature to me is the ability to swap drives in and out very quickly. If that’s important, then the Inateck enclosure would work very well. If I was looking for an enclosure for one drive that I didn’t anticipate changing very often, I might look for something sturdier.

The second item I chose was the “Inateck Perfect Laser Pointer Pen for presentation”, which is a mouthful, so I’ll call it the Wireless Presenter Stick. It’s one of those devices you hold when you’re running through a PowerPoint presentations to switch the slides without having to walk over to the laptop to do it. I’ve never had one of my own, though I have used tons of them over the years. 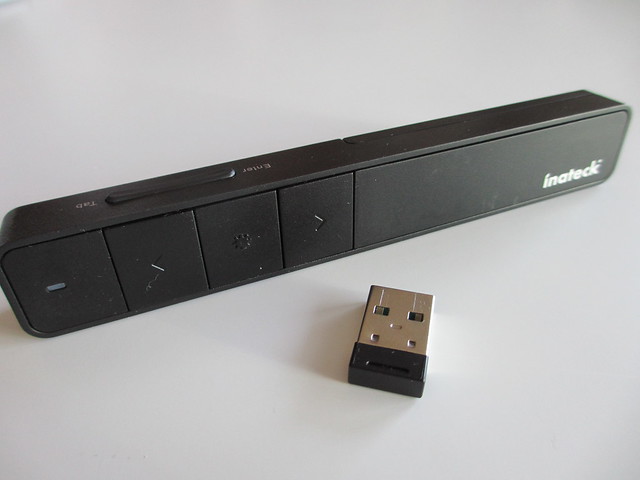 The Wireless Presenter Stick requires one AAA battery, which is not included. It’s made of plastic and is really light at just 24 grams. Inateck says it has a range of 20m. It requires a little USB dongle that is conveniently stored in the base of the stick itself with a magnet for good measure. Bluetooth would have been nice, especially if the MacBook-led trend of fewer ports continues, but it’s not a deal-breaker. The stick also features a laser pointer, which is handy for pointing to thinks on the screen/wall. 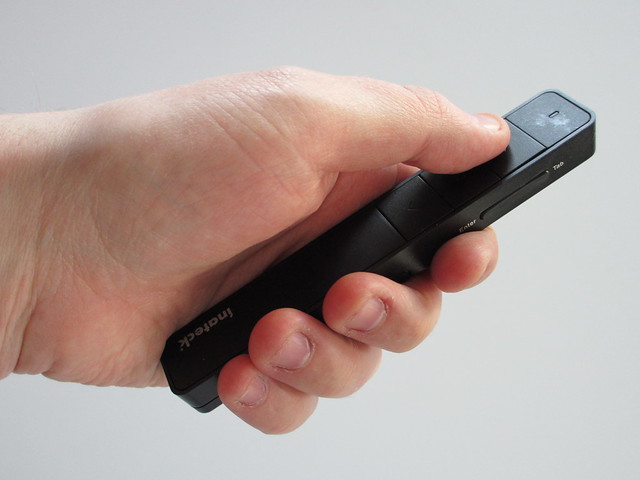 I feel like a wizard wielding a wand when I hold the stick! It’s about 5 inches long, so it’s certainly going to be noticeable when you hold it. Most of the edges are rounded, except for the top edge which is straight. While it does help you orient the stick in your hand, it does make it a little less comfortable to hold. There are five buttons and a power switch on the stick. The three buttons along the top are the forward and back buttons, plus the laser pointer button. Along the right side are the Tab and Enter buttons. The left side is where you’ll find the power switch (the stick will automatically enter sleep mode if you don’t press anything for a while to save battery power).

I have used the Wireless Presenter Stick for maybe half a dozen presentations now, on a few different computers. No drivers or installation is required, you simply plug in the USB dongle and you’re good to go. I didn’t test the range but in a big conference room it never failed to work as I moved around. I am a little surprised to see some wear on the buttons already, maybe from dirty hands? Nothing functionally wrong, just some markings on the plastic.

I have also used it in a group presentation during which we passed the stick around to a few different presenters. Pressing the buttons always works, there’s never a stutter or pause, and you never have to press it more than once. But, the one problem we did run into, is that everyone kept pressing the wrong button! When you hold the stick properly (the way that feels comfortable), the “previous” button is at the top and the “next” button is at the bottom. But invariably people try to press the top button for forward/next! It’s a minor annoyance I suppose, but I was surprised at how consistently the issue came up with new people. Because there’s no software to install, there’s no way to remap these buttons, but that would have been one way to solve the problem. 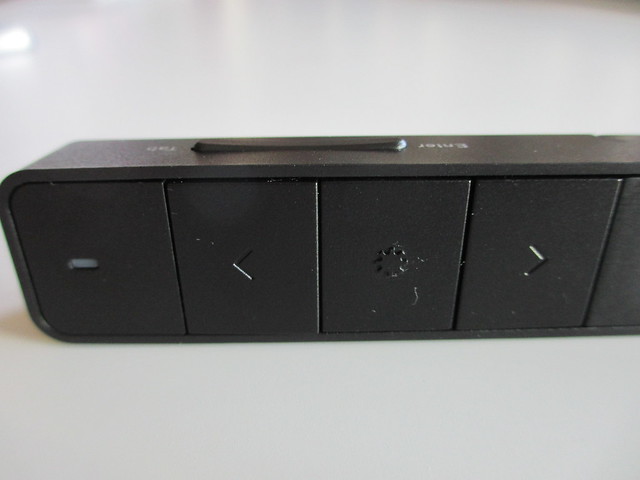 You can use the stick for more than just presentations. If you’re inside a browser, you can use the up and down arrows to scroll the page. You can also use the tab button to move from link to link, and enter to select one. This is a lot slower than the mouse or touch of course, but it can be done. It would probably make most sense as part of a presentation.

Inateck’s Wireless Presenter Stick is currently $26.99 at Amazon. The most direct competitor is probably the Logitech Wireless Presenter R400, which is nearly double the price. The Logitech one is about the same length but is wider and thicker and slightly heavier. The Inateck stick is decidedly less ergonomic, but compared to most of the other options out there, it’s slim and light. It gets the job done for a great price.