When I last wrote about EndPoverty Edmonton, the task force had formed a series of working groups tasked with generating recommendations that would form the basis of a strategy to end poverty in Edmonton. Now five months later, after countless hours of hard work from hundreds of volunteers, the strategy is inching toward completion.

EndPoverty Edmonton is a task force chaired by Mayor Don Iveson and Bishop Jane Alexander and is composed of 18 leaders and stakeholders representing a broad array of communities. The vision is to eliminate poverty in Edmonton within a generation (roughly 30 years according to the OECD definition) and the task force’s mandate is to develop a long-term plan to achieve that vision.

Last week, Mayor Iveson and the City staff working on the project hosted a volunteer appreciation event. “It’s so encouraging to see how many people stepped forward to help,” Mayor Iveson said. “Thanks for caring and wanting to make a difference for your fellow citizens.”

Over 200 volunteers contributed to 7 working groups, 2 round tables, and a few other subcommittees of the task force. Most groups met at least once a month from September 2014 through March 2015, and sometimes they met much more frequently than that. Countless hours were put in to help develop the recommendations required to construct the strategy.

The mayor acknowledged that although the structure and timescale that was imposed was difficult, it was important to maintain momentum, and seemed happy that that had been more or less achieved. He admitted that he’s not sure what EndPoverty Edmonton will look like after the strategy is finalized, but said that multiple options and models are being considered.

The goal now is to build a movement and the challenge is to figure out how to sustain it for a generation. “We have mugs now so we’re an official thing!” he joked. Everyone got to take one home at the end of the night. They won’t make a movement, but they can help to spark the conversation, we were told. 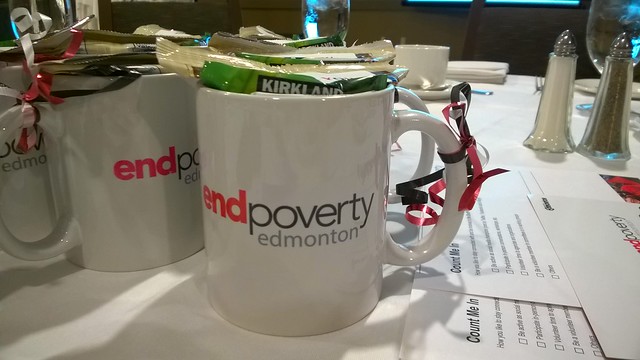 Toward the end of his remarks, Mayor Iveson talked about the TRC recommendations and The Walrus Talks Aboriginal City event from a couple months ago. He shared some thoughts on treaties, on what the Cree word for poverty means (it doesn’t talk about money), and on Canada being “an unfinished country” before joking that he didn’t mean to deliver his nation building speech. I thought the question he posed was entirely appropriate though: “What would it look like if we set out to build a city that lives and breathes the treaty spirit?”

The parting message to volunteers was to stay involved, as ambassadors if nothing else.

The working groups and round tables generated approximately 80 recommendations with over 400 actions. These were presented to the task force in March, and over the last few months they narrowed the list to 59 recommendations by combining similar ones and reworking others. To give you a sense of what the recommendations look like, here are a few selected at random:

Earlier this month, the number of recommendations was further reduced at a two-day facilitated event for task force members. They established criteria, priorities, and categorizations for the recommendations to help narrow the list down to just the most critical ones. For criteria, they considered:

In the end, 26 priority recommendations were identified and they are expected to go into the strategy that Council will consider in the fall. Half of these are considered “must do” while the other half are “why nots”. The list could still change in the end, but it feels like the task force is very close to finalizing it.

At the volunteer appreciation event, Mayor Iveson made a point of reassuring everyone that “the detail is not lost” and that the broader list of recommendations and actions has simply been parked for now and will become critical again as we get into implementation. He noted the importance of ensuring the work would “resonate with and have an impact on some key audiences” like policy makers and politicians.

When Mayor Iveson first talked of elevating poverty elimination to a task force with the weight of the mayor’s office behind it, he wasn’t sure how the idea would be received. “It’s a bold goal, but we are not afraid to take it on,” he said publicly, but privately he was uncertain about announcing the task force in front of 2200 business and community leaders. 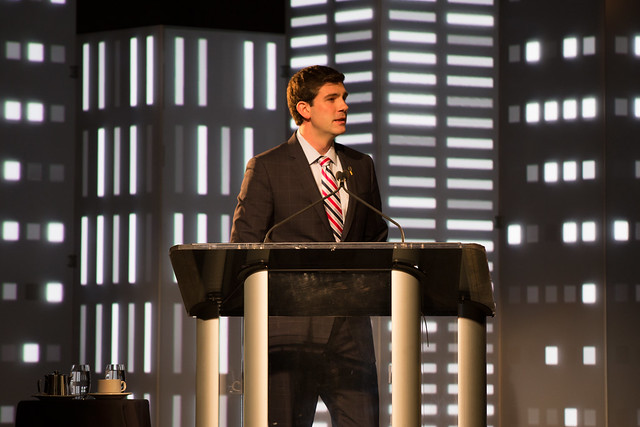 Of course he charged ahead, and the room expressed its strong support for the initiative. And in April, further support was identified through a benchmark survey on Edmontonians’ awareness and attitudes towards poverty. That survey found that “Edmontonians consider poverty as a significant problem in Edmonton” and that most “would like to know more about how they can contribute towards eliminating poverty.”

Though the feeling that poverty is inevitable lingers, the survey found that the majority of Edmontonians believe that poverty can be eliminated or drastically reduced. There’s also strong recognition that there’s more to poverty than just money.

The biggest challenge will be turning the work of EndPoverty Edmonton into a movement that can last for a generation. In recent weeks the City along with its partners has developed some marketing material to help build toward this goal.

“Fighting poverty and social exclusion is a collective responsibility. Everyone can play a role. We encourage you to raise your voice. Join the dialogue. Show your support. Rally for change.”

A big element of this was the launch of the new website and the increase in activity on social media. Both are continuing to develop and will gain new improvements in the months ahead, but already I’ve found the Twitter account a great source of information and resources related to poverty elimination. 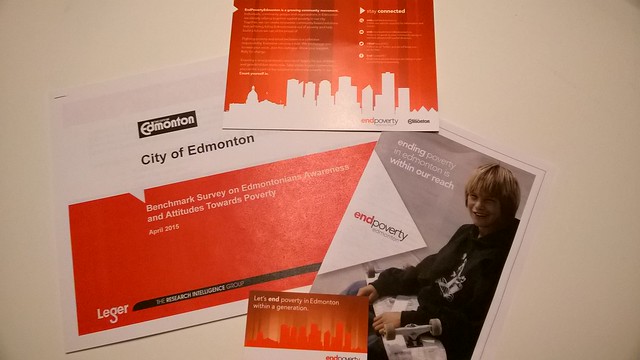 You can share your ideas on the website, and stay tuned for additional opportunities coming up such as a series of community conversations over the winter.

A two-phase approach has been adopted to take this work forward. The first phase is the approval of the strategy, which is slated to go to City Council’s Community Services Committee on September 14, followed by a full City Council meeting on September 22. The second phase would be the adopt of the implementation plan, which is expected to be complete around April 2016. In between, a series of community conversations are being planned to give Edmontonians an opportunity to learn about the plan and about what they can do to help implement it.