The big news this past week was of course the decision by Council to fire City Manager Simon Farbrother. “This decision is not the result of any one project,” Mayor Don Iveson wrote. “Instead, this is about setting our administration on a new path to manage the next chapter in this city’s growth.” The search for a new City Manager is expected to last into 2016. In the meantime, Community Services GM Linda Cochrane will be the interim City Manager.

Wednesday afternoon will be focused on Uber and the City’s proposed new Vehicle for Hire Bylaw that aims to give “transportation network companies” a legal way to operate within Edmonton. The City seems quite proud of the fact that “no other Canadian jurisdiction has passed new bylaw provisions to accommodate “ride sharing” providers within a vehicle for hire framework.”

The current bylaw was passed on March 1, 2008 and regulations have remained “substantially similar” ever since the mid-1990s. It was in 1995 that the City capped the number of taxi vehicle licenses. Since then however, technology has changed significantly giving rise to services like Uber. Now the laws need to change in order to catch up.

Photo by Moments in Digital

The proposed new bylaw would:

The five classes would include taxi, accessible taxi, limousine, shuttle, and private transportation provider. The latter is where Uber drivers would fall. Intentionally, the bylaw does not attempt to regulate “matters that are more appropriately governed by the market or the industry itself” like driver training.

Calling the proposed bylaw “an important step forward” Uber was nonetheless unimpressed and said the company would be “unable to continue operating in Edmonton” if it is passed. Considering they are already operating illegally, I’m not really sure that’s a viable threat. Unsurprisingly, the United Cabbies Association of Edmonton is also opposed to the proposed bylaw changes, saying “there will be a flooding of taxis in the city.”

Uber is holding a rally at Churchill Square on Wednesday at 11:30am and I would not be surprised to see the taxi drivers make a scene as well. It should be an interesting week!

There has been a lot of discussion this summer about infill development and the potential negative impacts of that construction on neighbours. This includes noise and cleanliness, but also potential damage to surrounding property caused as a result of the construction. We know that infill makes up only a tiny piece of Edmonton’s growth, but it should increase in the years ahead which means tackling this problem now is a good idea:

“Over the last five years (2010-2014) 8,475 new infill housing units have been added to Edmonton’s mature and established communities. In 2014 alone, the City approved over 12,000 new housing units city-wide, and over 2,000 of these were new infill homes (a combination of low, medium and higher density forms).”

Currently when conflicts arise from infill, complaints are forwarded to the appropriate department and investigated to determine what steps are to be taken. Before the City will take any enforcement action, contact is made to encourage best construction practices and voluntary compliance. If that doesn’t work, they can issue a warning or a violation ticket. This is how it works in greenfield, suburban development too but as you might expect complaints in those areas are much less common. 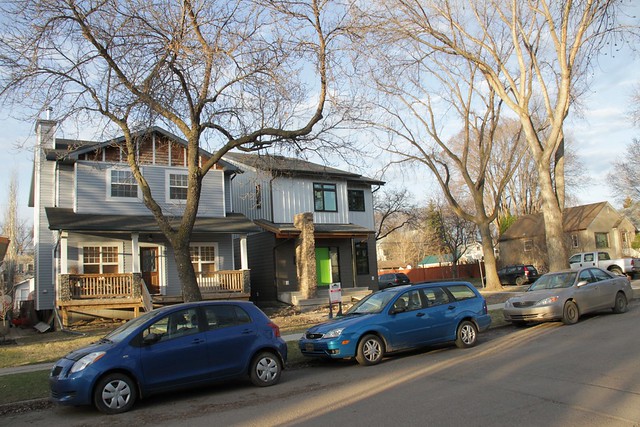 To address this issue, the City has made a number of changes to the process:

Additionally, these potential changes are currently being evaluated:

Hopefully these changes will help to smooth the issues with infill development so that it continues to be an attractive, viable option. We need growth to occur in mature and established neighbourhoods too, so removing any potential barriers is critical.

There’s a separate report that provides more information on the Mature Area Development Team. I gather it is meant to be kind of like Civic Events – a one-stop shop for everything City-related, in this case for development rather than events. It’s a great concept, and I support trying it. But care needs to be taken to ensure authority is still clearly understood and that the team does not just add yet another step to already cumbersome processes. In a lot of cases Civic Events is just the middleman, and everything goes more slowly as a result.

At the Transportation Committee meeting this week, Council will receive a report on autonomous (self-driving) vehicles, something Uber has been working on also.

“In preparing for autonomous and connected vehicle technology, the most prudent action that the City can take is to continue to focus on enhancing the transportation system as defined through the corporate outcomes.”

The report acknowledges that autonomous vehicles will provide an alternative to driving, but notes “they do not remove the urgent case for mode shift to transit and active transportation.” The City is seeking additional perspectives from researchers, other governments, and industry, and the report highlights the ACTIVE-AURORA research project as one learning opportunity.

The report concludes that “adoption of driver-less vehicles will likely require changes in provincial legislation” and that cities will need to work with the other levels of government on liability and safety issues. The City is currently undertaking “a future-oriented assessment of the implications of automated vehicles.”

If Council decides to approve the 2016-2020 Road Safety Strategy, Edmonton would become the first Canadian city to adopt Vision Zero – zero fatalities and major injuries from motor vehicle collisions. The strategy is expected to cost at least $11 million annually on top of all currently approved operating and capital programs, and the City proposes funding it through the Traffic Safety & Automated Enforcement Reserve and cost recovery.

“The City of Edmonton will become the first major Canadian city to adopt Vision Zero, a global initiative to save lives and eliminate major injuries from motor vehicle collisions. A key component of this strategy will be the adoption of the Safe Systems Approach. Central to this approach is a shared accountability between road users and those who design maintain and operate all parts of the road transportation system. The safe system depends on understanding and implementing guiding principles.”

You can read the nicely-designed strategy in PDF here.

Design Guidelines & Regulations for Signage in the Civic Precinct

With the new arena and surrounding district, the City is anticipating increased demand for digital signs downtown but the current regulations “are not sufficient to ensure that digital signs are sensitive and sympathetic in design” to the arts and culture of the Civic Precinct area. Digital signs are fine around the arena, but need to be restricted around City Hall, for instance.

The Civic Precinct is the the area between 99 Street and 100 Street from 102 Avenue to 103A Avenue. It includes City Hall and Churchill Square. The area is “to be developed as the urban heart of Edmonton with a unique mix of cultural, commercial, and civic developments” all connected to the Square.

The proposed amendments to the Capital City Downtown Plan and Zoning Bylaw would effectively prohibit digital signs within the Civic Precinct. Admin is also going to complete a city-wide review of digital sign regulations and will present any potential amendments to Executive Committee sometime next year.