Last Tuesday the Edmonton Journal launched its redesigned newspaper, website, and mobile apps. It has a new logo, new fonts, new colors, and a new ad campaign called “at your fingertips”. In announcing the changes, editor Margo Goodhand wrote:

“These changes reflect detailed research on how, when and why you read us. As our audience has grown and changed the past 112 years, we have, too. We’re excited about unveiling big, new ideas.”

The redesign is the latest in a series of changes that Postmedia has made since the Ottawa Citizen launched its new look in May 2014. The Montreal Gazette and Calgary Herald redesigns launched back in October and November 2014, and at the time it was expected the Journal redesign would launch in March of this year (I’m not sure why it was delayed). We’re the fourth of seven planned redesigns. 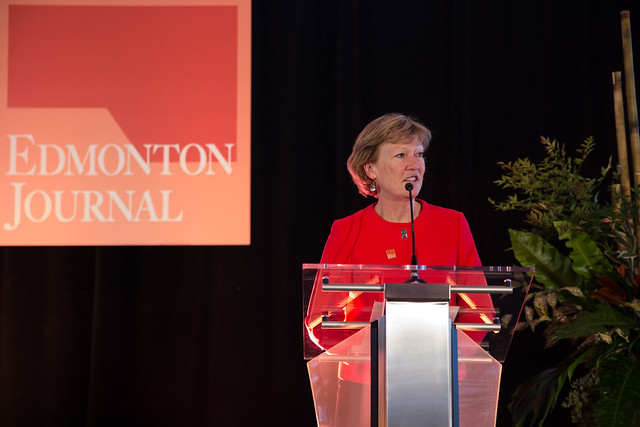 Thus far Postmedia has been highlighting its four platform strategy, with different print, web, smartphone, and tablet editions. But it appears that strategy has faltered here in Edmonton, as we are not receiving the same tablet changes that other markets have. For instance, when the new Herald launched Postmedia talked about “a new weekday news and current affairs magazine app for the tablet available through Apple Newsstand, ready for readers to download weekdays at 6 p.m.” Here in Edmonton, we’re getting “a rebranded iPad app, available through Apple iTunes, providing a comprehensive tablet news experience with multimedia and rich photos.” Instead of the updated tablet app, we’re getting additional non-local content with “NP in the Edmonton Journal”, a pilot project that is “a comprehensive package, 8-12 pages in length of national and international news, commentary and analysis powered by the National Post.”

This highlights that there’s nothing local about the changes. The redesign removes any doubt that the Journal is part of a national chain, with Postmedia featured prominently and very little room for the Journal to be unique. The Herald, Journal, Gazette, and other papers in the family have always shared elements of their look and feel, and even content, but the new design seems to take that commonality to the next level.

The new Edmonton Journal logo was designed by Tyler Brûlé & Winkreative (all the new redesigned logos were). It features a two-tone orange abstract shape that had many Edmontonians scratching their heads when it was unveiled. Paula collected all the responses and jokes about just what the logo is here.

The official explanation is:

“The Edmonton Journal’s redesigned masthead combines its classic nameplate with an abstract representation of Edmonton’s River Valley. Rendered in shades of orange, inspired by the fall colours, harvest time and the beautiful sunsets over the Edmonton city skyline, the new masthead reinforces our connection to the city and unifies our print, web, smartphone and tablet platforms.”

As mentioned the words “Edmonton Journal” are the same as before, they’re just now inside the orange box. Still, I found this response to the Montreal Gazette’s new logo could just as easily apply here:

“I don’t recognize the Gazette anymore. The new logo doesn’t say, “trust me.” Now it just whispers “I’m from Toronto,” or, more specifically, “My design was outsourced to Hamilton,” because it’s a little to shy to admit it. I would be, too.”

I understand the decision on the logo and colors was made in Toronto well before Albertans elected an NDP government. I also understand that we won’t be the only “orange” city in Canada as only a handful of colors were chosen for the planned newspaper redesigns.

Having a square logo makes a lot of sense in this age of profile icons, but I honestly do not see the river valley nor sunsets when I see the new Journal logo. I just keep thinking about file folders. I guess it’ll take some time to get used to it and to stop hunting for the blue EJ icon.

The new logo is being used in all four editions and has also made its way to ID badges and signage.

This is the edition I use most. The new Journal website runs on WordPress VIP just as before but it now features a modern, responsive design. This means that depending on the size of your screen, the site adjusts its layout accordingly. It looks good, if a little stark (there’s a lot of white). Headlines use the “Titling Gothic FB Cond-Standard” typeface, with the article body using “Benton Sans-Regular”.

One of the biggest changes appears to be the prominence of the Postmedia brand. You’ll see it in the top right in the banner that is pinned to every page, and in the footer in big, bold letters with links to other Postmedia Network properties. Combined with the National Post ad banner that usually appears above the fold, the new Edmonton Journal is more tied to the network than ever before.

The other big difference with the new site is the performance. It’s anecdotal, but it feels faster to me than the old site did. A quick test using Pingdom shows that the site takes 271 requests to load 3.3 MB for a performance grade of 68/100. According to the tool, the new Journal site loads faster than 43% of all websites tested.

It seems like URLs are in transition, with a new slug style (/business/local-business/paula-simons-blog-how-orange-was-my-valley) and old slug style (/news/world/pizza+wins+over+hearts+jaded+cynics+social+media+starts+trending/11378573/story.html) co-existing. The new ones are much more readable, though they still aren’t hackable (/business/local-business/ gives you a 404).

And my favorite change? The artificial 2-page article is gone – everything appears on a single page now, no JavaScript clicks required.

Though there are some very visible changes, a lot has stayed the same also. Stories still use Facebook for comments. You’ll still find a large ad unit at the top and a few ad squares down the right column. And annoyingly, you’ll still get full page ads like this:

Another thing about that screenshot is that it probably takes you longer than it should to figure out what site you’re looking at! There is no traditional-looking masthead and the square logo isn’t very differentiated from the other squares at the top of the page.

Overall though, I like the changes. The site feels faster, the new story toolbox (with share, comment, print, and font adjust buttons) is much more useful, and even though it’s a hamburger menu I actually am growing to like the section navigator.

I don’t regularly read the print edition, but Sharon does. She noted the reorganized (and in some instances renamed) sections and also commented (as others have) that the font seems smaller (though it is actually “a wee bit bigger” but I guess the different typeface could account for the difference). The new print edition was designed “by Postmedia design consultant Gayle Grin, with input from Mario Garcia, the world’s preeminent newspaper designer,” the same folks that worked on the other newspaper redesigns (as you might expect). 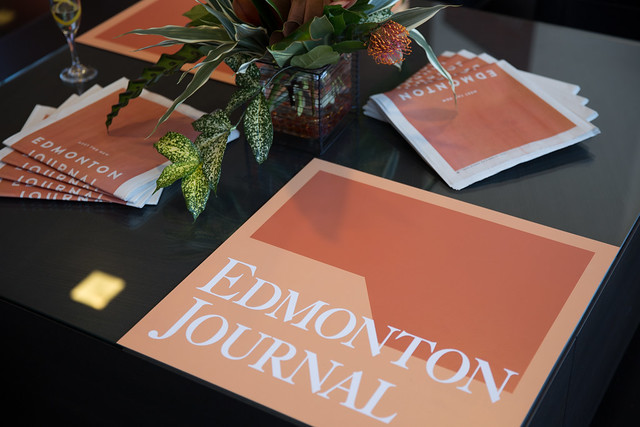 In glancing at the new print edition, it strikes me as more colorful but less local. I’m sure it has just as much local content as before, but the National Post and Financial Post seem to be featured quite prominently (in addition to NP in the Edmonton Journal there’s FP Edmonton which is the new Business section).

The new tablet app is actually the old tablet app as mentioned above, but with a fresh coat of paint. You’ll find the new orange logo and some minor look & feel changes, but that’s it. Everything else is the same as it was before. 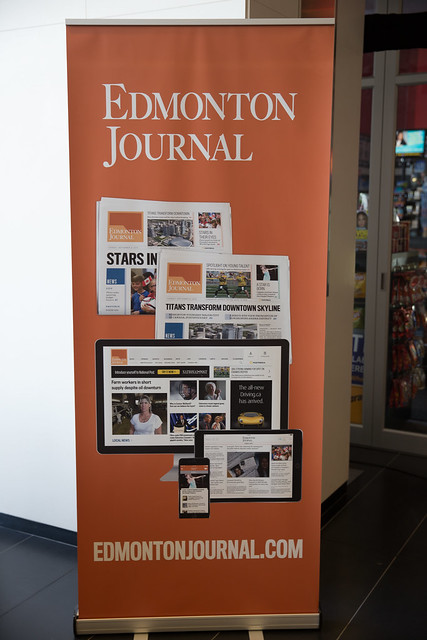 The new smartphone app has changed, however. In addition to the new logo and colors, the app now features a section called “EJ Now” which is intended to “focus on live, local storytelling with content formatted for the small screen and aimed at readers on the move.” It is updated from 6am until midnight. The app is available for iOS and Android, so Windows Phone users like myself have to rely on the responsive website (which is a huge improvement over what we had before).

I’ll just highlight what was written in the news release for this one:

“The new advertising campaign, “At your fingertips”, is centred on the Edmonton Journal offering a variety of content that matters to Edmontonians and is available on all four platforms. The campaign focuses on both local and generic characters representing content categories such as news, sports, politics, business, arts and life and reinforces the accessibility readers have to the Edmonton Journal’s content. The integrated campaign, developed in collaboration with Sid Lee, starts today.”

The McDavid finger is cute, but I don’t expect this campaign will last long.

I think there are some positive and negative changes with the Journal’s redesign. The faster, responsive website is long overdue and will have a big impact. The print changes don’t seem too controversial, though it remains to be seen how pilots like the National Post insert will fare. I think we could see some great things with the EJ Now smartphone feature, but it’s a shame nothing has been done for the tablet edition.

But with all of these changes the Journal feels less local and unique. And who knows what’ll happen now that the Sun and Examiner are working in the same building. It was very strange to see Sun/Examiner publisher John Caputo walking around with an orange Edmonton Journal pin at the launch event. It’s a brave new world, I guess!

The bottom line with this redesign? It seems that a better experience comes at the expense of local individuality. The Edmonton Journal is Postmedia’s Edmonton Journal, now more than ever before.