Edmonton’s 2015 Urban Design Awards recognized “the memorable urban places that make up a great city” on Friday. Among the winners was the new Centennial Plaza1, the large open square that was built alongside the redeveloped Federal Building. The plaza was recognized for Excellence in the Civic Design Projects category. 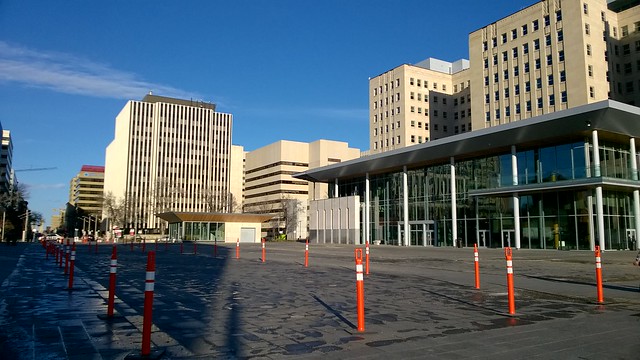 You’ve probably spent some time visiting the plaza this year, perhaps to admire the colorfully lit fountains in person. I like the fountains as much as anyone, but there’s no way this project should be winning awards. Here’s why.

I’m sure you’re aware that the Province “saved” $10 million on the Federal Building renovations, a project which ballooned to $375 million anyway. They did that by quietly scrapping a number of planned features, including what was meant to be the primary attraction for the plaza – an outdoor skating rink. They also cancelled the planned Zamboni purchase, but decided to keep the garage as a storage facility. Also removed was planned landscaping, some of the fountains, and other features. This was all decided back in April 2013 without any public consultation or even communication.

As Dave wrote back in January:

“It is a shame the PC Government chose to, more than a year ago and in secret, axe the elements of the renovated Federal Building and the Legislature Grounds that could have become a destination for the general public and an important part of the revitalization that is happening in downtown Edmonton. Hopefully they will see the error of this short-sighted decision and re-introduce the public elements in future renovations. Our Legislature Grounds are beautiful and we should be striving to create new ways to make it a more vibrant gathering spot for Albertans.”

As it stands, the plaza is little more than an open space to walk through.

Though I think Edmonton has more than enough large open squares as it is, with one more under construction at Rogers Place and another under consideration with the Galleria project, the Federal Building plaza could have been a great venue for events. We thought it could have been a great location for What the Truck?! but had to settle for the streets adjacent to the square instead. There are two reasons for that.

First, the Province has historically been extremely reluctant to open the Legislature grounds to outside events. You can show up to protest, but not to enjoy the grounds as part of another event. Unless of course the Province organizes it themselves, as with the Canada Day celebrations. There are signs this is changing and we did have some productive conversations this summer that make me optimistic that the rules will change, but I’ll believe it when I see it.

Second, whether it’s true or not, I keep hearing repeatedly that the porous granite in the plaza is a problem that prevents vehicles, food trucks, and some other types of activities from taking place in the square. Churchill Square is going to be closed for the summer of 2017 (at least) due to LRT construction, so events like Taste of Edmonton are going to need to find a new home. The new Centennial Plaza seemed like a great location to fill the gap, and to keep those events downtown, but that may not be possible.

It’s like they intentionally designed the plaza so that it couldn’t be used for events. Issues like a surface that is too porous or difficult to clean should have been considered – the City has been dealing with similar issues in Churchill Square ever since it was redesigned into its current form. There’s a lot of experience and knowledge about squares locally that could have been tapped into for the design of the new Centennial Plaza.

On top of all that, the plaza is not even done! The public washrooms remain locked, taunting everyone who walks by.

Edmonton is a Winter City

But the biggest issue I have with the new Centennial Plaza winning an Urban Design Award in Edmonton is that it clearly was not designed with winter in mind. At least not since the skating rink was scrapped. That’s just inexcusable in a Winter City. 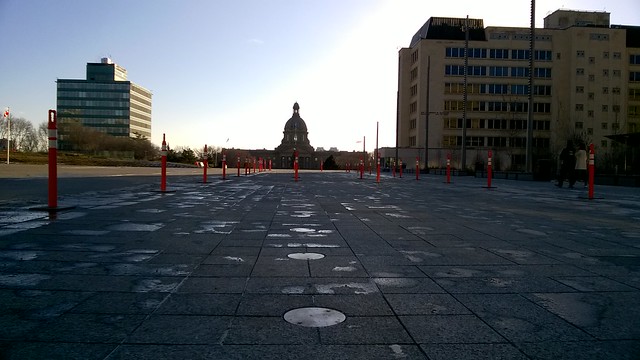 The fountains have long since been capped with metal covers, blocking not only the water but also the lights. The large open space offers little shelter from the wind or snow (and if they’re worried about vehicles damaging the surface, are they even going to keep it cleared?). And these are just the basics. Forget “experimentation with innovative, climate-oriented urban design” as Edmonton’s WinterCity Strategy calls for. Here’s what the strategy outlines as a possible way to design a winter-friendly space:

Doesn’t that picture look suspiciously similar to the plaza in terms of layout? Yet it’s so different in every other way. There’s such potential in the plaza for some of those winter design elements! Instead, we get pylons.

“It’s as much about attitude as it is about latitude. Winter cities have found ways of embracing and falling in love with winter. They use winter as an inspiration for designing public spaces and buildings, as a motivation for recreation and celebrations; they’re cities that share the wonders of winter with the world.” – Carol Neuman

It’s a shame. Where’s the winter equivalent of the illuminated fountains that caused such a stir over the summer?

“This category of award will recognize a civic improvement project such as a park, a public space, civil engineering or environmental infrastructure, street furniture and lighting elements, etc., which have been implemented as the result of an urban design plan or initiative.”

The “primary criteria for assessing the merit of the plan” included:

That’s it. Nothing about how it might be used or importantly, when it might be used. Should there be criteria for winter? In Edmonton, probably yes. Let’s hope this can be considered for 2017.

Better, but still room for improvement

It’s true that Edmonton’s urban design has made great strides in recent years. I’m thrilled that the Borden Park Pavilion and Vaulted Willow both won awards on Friday, for instance. But we still have a long way to go, especially when it comes to winter. We shouldn’t be celebrating mediocrity along the way.