There’s a lot of interesting work happening right now on public involvement in Edmonton with the Council Initiative on Public Engagement. With luck the effort will transform public engagement from an exercise in frustration to one based on hope and possibility.

“From October 2014 to June 2015, the Council Initiative on Public Engagement initiated a broad dialogue with a cross section of Edmontonians, City staff, as well as the mayor and members of City council. This included over 40 workshops and outreach events listening to about 1,000 voices and leveraging hundreds of volunteer hours.”

The first phase of the initiative wrapped up in September 2015, and the second initiative is now well underway. 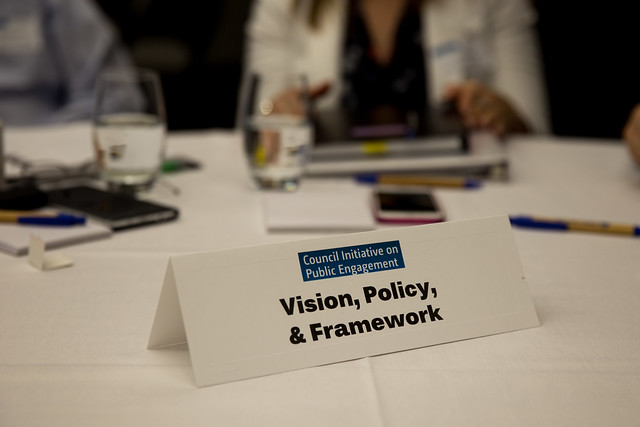 Below I’ll cover the background of Edmonton’s public engagement initiatives, the formation of the initiative, a summary of the first phase, and an update on the next steps.

The City of Edmonton undertook to “improve and clarify” its varied and unstructured approach to public engagement in the early 2000s, resulting in a City Policy and Procedure (C513) on public involvement. “The City was entering a period of extended growth and citizens’ expectations were growing for how they should be involved in the decisions that affect them,” is how Administration recently reflected on the initial work. The policy included the following commitment to citizen engagement:

“The City of Edmonton believes that a key element of representative democracy is that people have a right to be involved in decisions that affect them.”

The City also developed a framework called Involving Edmonton which “consisted of Core Commitments and Standards of Practice, a Continuum of Public Involvement, the Public Involvement Roadmap, and a Public Involvement Plan (PIP) template.” It received a minor update in 2008, and has remained the key tool City staff are expected to use to guide their public engagement activities.

From 2007 to 2012, the City also used a piece of software called Consultation Manager which was supposed to help staff with planning and reporting on events. The City dumped it “due to lack of use, an unfriendly user interface and high monthly fees.” The City also experimented with different staff roles, establishing a Public Involvement Coordinator position in Transportation Services in 2009, the only department to have such a position. Also in 2009, the City launched the Centre for Public Involvement in conjunction with the University of Alberta.

In 2012 the City revamped its Office of Public Engagement (originally formed in 2006) with a new short-lived initiative called the Corporate Approach to Public Engagement (CAPE). It was late that year that Cory Segin joined the City to lead the office, which moved under Corporate Communications. 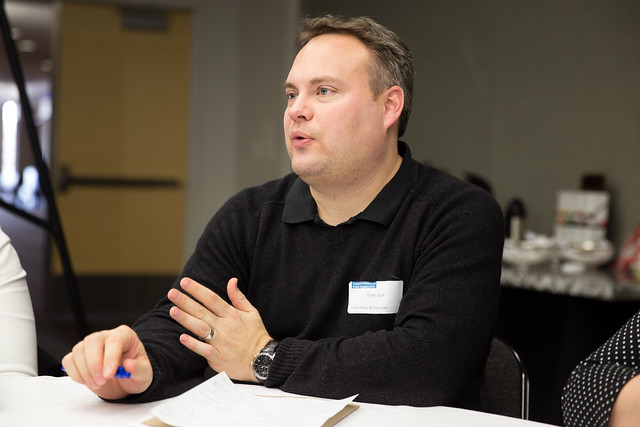 The 2013 Municipal Election was a turning point on public engagement. Some Edmontonians had been discussing possible changes and improvements for years, but it was during the election that the need to do better became real for Council and administration. “Many Edmontonians, stakeholders, Councillors, and members of City Administration observed that the City faces a number of challenges and opportunities in public engagement, including responding to evolving citizen expectations, supporting growth, ensuring consistent and quality processes, and capitalizing on opportunities for innovation.”

In 2014, the City Auditor conducted a Public Involvement Audit. While the audit found that “Administration was compliant with City Policy C513, Public Involvement and the Involving Edmonton Framework,” it also identified eight issues with the City’s public engagement process.

The initiative’s primary goal is to create a process that will improve public engagement in Edmonton and it was determined that the work of the initiative would take place in phases.

Those are the questions that the initiative aims to answer. The work was originally organized into four main streams:

Dozens of workshops took place from October 2014 through June 2015. I had the opportunity to attend a few of the workshops during that time, including a workshop on Public Engagement Obstacles in April 2015. The purpose of that particular workshop was to try to determine, “what is getting in the way of effective public engagement?” We worked in groups of 6-8 people to brainstorm obstacles, after which we clustered and labelled them. Some of the obstacles identified included “mutual distrust”, “competing priorities”, “gaps in understanding”, “unmet basic needs”, “inconsistent or poorly executed processes”, and “tension between individual and community interests”. 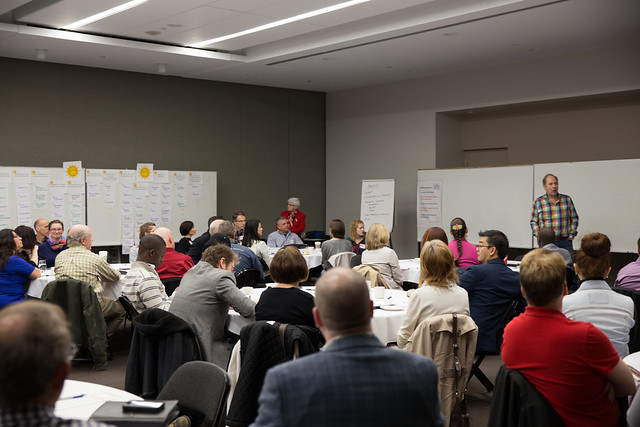 It was a productive session, and I really appreciated the working assumptions the workshop began with:

Another group came together in June to review and discuss strategies to overcome the obstacles that had been identified. They also worked to identify the key areas of focus for phase 2 of the initiative. The first phase came to a close with the publication of the Final Report in September 2015.

“This first part of Phase 1 of the Council Initiative on Public Engagement provided a foundation of collective wisdom on which to build. It was the first step in a long journey. Together, we started to build a shared understanding and a common voice on why public engagement is important and what we should strive for as a City in our approach to public engagement.”

The end of Phase 1 also marked the start of the Advisory Committee, made up of City staff and community members and modeled on the approach used to develop the Winter City Strategy.

The work of the initiative is now being led by the Advisory Committee, with five working groups focused on the strategic areas of focus identified during Phase 1.

Each working group is responsible for determining its own priorities and action plans, and each has the support of a senior member of Administration. In 2015, the initiative’s budget was $425,000 thanks to contributions from various departments and branches. A similar budget is expected for 2016 and 2017. 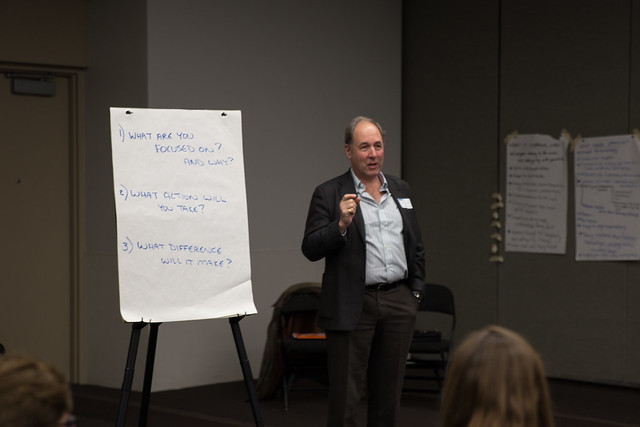 The working groups were established in the fall, and a working group assembly took place in January 2016. Councillor Henderson spoke at that session about the initiative, and said the decision was made “not to rush this”. He reminded everyone that we “can do something really remarkable” and that there’s “no need to jump to the obvious answer or solution”. You can hear more from Councillor Henderson in this video:

Claire Ashton, the initiative’s project coordinator, provided an overview of the progress to-date at the session and said that she was feeling inspired by everyone’s efforts. In a recent email to all participants, she said “doing things differently in the area of public engagement will require a great deal of commitment from all of us.” 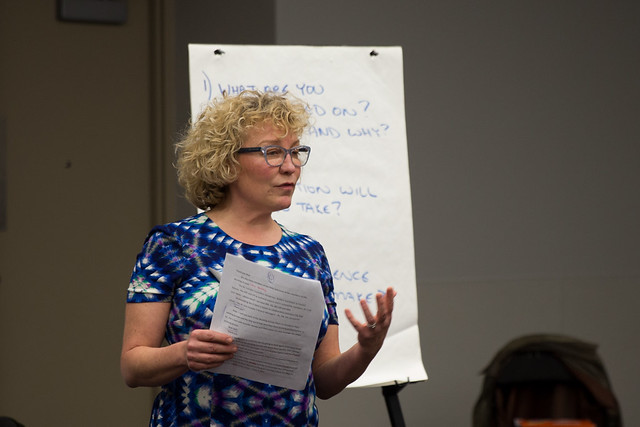 Claire is featured in this video overview of the initiative:

We also heard from the working group chairs, who each described the work of their group and shared a reflection on the initiative thus far. In a show of commitment and support, nearly everyone from the Corporate Leadership Team was present, including City Manager Linda Cochrane.

Some members of CLT

Linda told us that the City will up its game in resourcing public engagement and that “there is definitely permission to explore this and take it where it needs to go.”

I am very happy to be a member of the Vision, Policy, and Framework group! We are tasked with crafting a definition for public engagement, drafting the vision and principles that other working groups will build upon, and we’ll create the framework and policy that will be critical for implementation. We will of course be exploring various engagement approaches to gather input and feedback as we undertake this work.

Our timelines are aggressive. Another working group assembly will take place next month. A public event is scheduled for May where the definition, vision, and principles will be launched, and the next steps will be outlined. The initiative is slated to wrap up its work by the end of the current Council term in 2017, though hopefully it doesn’t end there. “The goal is to achieve a continuous improvement program over longer timelines which builds on previous work and recognizes that lasting improvements are often part of a broader and sustained culture and organizational change effort.”

There are many ways to get involved in the initiative. Start by checking out the City’s Public Engagement Calendar and watch for upcoming events, like the one in May. On Twitter, the hashtag #yegengage is being used to post updates and discuss the work of the initiative. And if you’re not already a member, consider joining the Edmonton Insight Community to participate in regular surveys on City initiatives.