Council is back to Committee meetings this week, with a very full agenda and some big ticket items to be discussed.

Administration has come forward with a project plan for the program & service review that Council has requested. All City services will be reviewed a high-level and some will be identified for a deeper analysis to determine if the service could be reduced or stopped, provided differently or enhanced, or if new services are recommended. The City anticipates evaluating “approximately 30 programs and 200 services, which could be compared with services in other jurisdictions” using the Municipal Reference Model. The evaluation will focus on relevance, effectiveness, and efficiency:

The review will start this year and will take until December 2018 to complete. Costs associated with the work in 2016 are expected to be $600,000 which “will be funded from existing resources leveraging currently planned service reviews.” The City is proposing three pilots in 2016 to “test the approach and identify improvements in the project methodology.” Additional costs for 2017 and 2018 will be determined after the pilot reviews are complete.

Edmonton’s three Urban Growth Areas are Decoteau, Horse Hill, and Riverview. When considering a build-out over a 30-40 year time frame starting this year, the highlight is that the three areas “are anticipated to require approximately $1.4 billion in capital investment by the City.” On top of that, “a developer infrastructure investment of approximately $3.8 billion” is required. But we know that new neighbourhoods do not pay for themselves. “The projected cumulative shortfall over the 50 year analysis period for the build-out of the Urban Growth Areas is anticipated to be in the order of $1.4 billion.”

As a result of all of this, “the City will need to continue its efforts to promote greater density, more effective utilization of infrastructure, and grow the industrial and commercial sectors in order to balance the City’s overall assessment base.”

Administration is working on a Growth Modelling Framework that would proceed in four phases through 2019. While it may be a useful tool, that seems awfully late to be available considering development of all three areas is already well underway.

Apparently the winning bid from TransED Partners to build and operate the Valley Line LRT came in at $2.2 billion, about $500 million less than the City was expecting. As a result, the City is recommending the 0.8% tax levy scheduled to start this year should be dropped to 0.6%, which would translate to savings of $4.25 for the typical homeowner. Another option could be to grow the LRT reserve fund faster.

Instead of a rebate to homeowners, the Amalgamated Transit Union would prefer to see the money spent on transit. “It’s capital money that was intended to flow into transit,” ATU President Steve Bradshaw told Metro. “What we’re saying it was intended for transit and it should stay for transit.”

Here’s the background on this one:

“In the fall of 2015, a Traffic Shortcutting Pilot Project was undertaken in the communities of Crestwood, Newton, Ottewell and Ormsby Place to develop a streamlined process to address localized shortcutting and speeding concerns. The traffic management measures of the pilot project included speed humps, speed tables (speed hump with a flat top), driver feedback signs, the review of traffic signal timings and the restriction of vehicle access (Ormsby Place only).”

About a third of respondents to a questionnaire felt the measures benefited their community, while a quarter felt the measures improved traffic safety. The report highlights a number of lessons learned, including:

A separate report provides an update on the Community Traffic Management Plan pilot program in the Prince Charles and Pleasantview Communities. Activities are ongoing in Prince Charles, but the trial in Pleasantview was removed in February. The lessons learned through those two pilots were broadly similar to the others noted above.

All of the lessons learned and other input will be considered in the development of a Policy on Traffic Shortcutting and a Community Traffic Management Policy, currently slated to be ready for Council’s review in June.

It looks like the uncertainty over the immediate future of Telus Field is coming to an end. The Edmonton Prospects Baseball Club has been selected as the preferred proponent to operate and maintain Telus Field and they’re looking to sign a four-year deal with the City to do just that. They would pay an annual license fee of $20,000 per year, in addition to operating and maintenance costs. The City would still be responsible for preventative maintenance, waterproofing, snow removal and parking lot maintenance, and utility costs related to the City’s office space in the building.

The City is still working on a longer-term vision for Telus Field as part of its plan for the River Crossing area, expected to be delivered in 2018. The River Crossing area encompasses land redevelopment in West Rossdale, repurposing of the Rossdale Generating Station, and other items. “This plan will take an integrated approach to advancing change in this unique and complex area,” the report states. 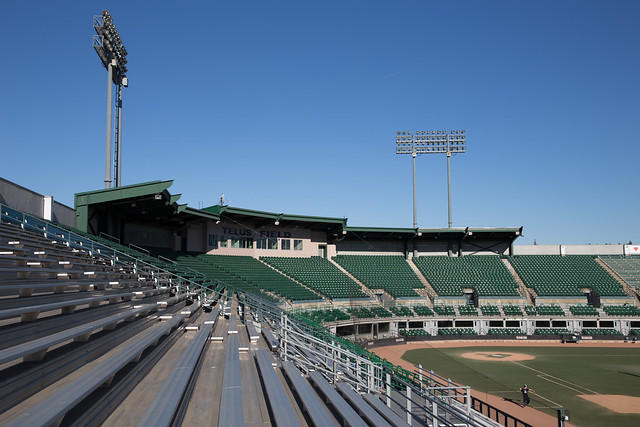 In addition to the agreement to operate Telus Field, the Prospects are requesting permission “to secure a new naming sponsor for the facility.” They need Council’s approval to start looking for a new sponsor, and even once they find a willing partner, the Naming Committee and Historical Board must be consulted and Council will have final approval. The Prospects need the sponsorship revenue to help support the operation of the ballpark.