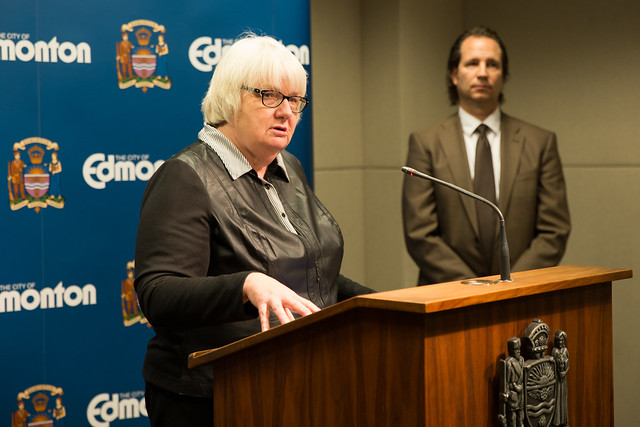 Here’s what the mayor had to say on why Linda was selected:

“As you know, Linda had been Acting City Manager since the fall of 2015. In that time she has earned the complete trust of City Council through her continuing work to transform the structure of the corporation and lead a more open and effective local government.

It is important to note that this was an international search with applications from candidates far and wide. The interest of so many talented applicants is a wonderful compliment to our community, our vision, and the work of our administration – things we should all be immensely proud of. More to the point, it is a reflection of the quality of Linda’s tremendous service and inspiring leadership that she was considered best amongst this class of impressive candidates.”

Council has signed Linda to a three year term, with options to renew. Linda was very clear back in January that she wanted to be considered for the role. Today she was elated to have been selected, telling the Journal: “I’m just over the moon. It’s a realization of a lifetime dream. I couldn’t be happier.”

Linda started her career in aquatics programs, first in Edmonton as a swim instructor and then with Spruce Grove. She returned to the City in 1982 and started climbing the management ladder. She was director of the Kinsmen Sports Centre and in 1990 was asked to take on the role of director at the Valley Zoo. It wasn’t long until she was in charge of the City’s parks and recreation centres. Linda was most recently the general manager of Community Services (now Citizen Services after the reorg she announced in January), a position she took on in 2006.

Linda has worked on a number of high profile projects throughout her career. She defended the Valley Zoo’s care of Lucy the Elephant and refused to bow to pressure from Bob Barker and others who wanted Lucy moved. Linda was one of only four women on the eighteen-person bid committee for the 2001 World Championships in Athletics. She led the charge to build the Terwillegar Rec Centre and led a review of all the City’s facilities. Most recently of course she earned the nickname “cabbie whisperer” for her quick action to restore order during contentious Council discussions on Uber.

Linda is Edmonton’s first female City Manager. That’s particularly interesting given that she is the only woman on the Corporate Leadership Team (CLT). “Between 2012 and 2015, the percentage of general and branch managers who were woman held steady at 22 per cent. It’s now 16 per cent,” reported the Journal. Of course there’s just one woman – Bev Esslinger – on City Council as well.

I wrote back in November that I didn’t think Linda was likely to get the job. That comment was based not on her abilities, but on what Council had publicly stated they were looking for. Mayor Iveson’s statement back in September said “the scale and complexity of the challenges ahead demand a fresh perspective” and that Council’s goal was to “hire someone who can meet the aspirations of this city head-on and help build the kind of city we can all be proud of.” It seemed as though Council wanted someone from the outside.

I do think Linda is a great choice for City Manager. She is well-known and widely respected at the City has earned a reputation as someone who gets things done. Linda will tell it like it is, and that’s certainly important to Council. She has been supportive of the ongoing culture shift at the City and has talked often of leading through service. Linda is ideally suited to guiding the City through turbulent times.

In just a few short months as Acting City Manager, Linda has really put her stamp on the organization, earning Council’s trust, the public’s admiration, and leading a key reorganization. I can’t wait to see what she accomplishes in her new role.