Sharon and I spent most of the long weekend down in Calgary, enjoying the beautiful weather and trying a bunch of new restaurants. A trip to our southern neighbour to eat has nearly become an annual tradition for us. This time we visited Cluck n Cleaver, Charbar, Shiki Menya, Pigeonhole, and returned to our favorite, Blue Star Diner. It was a great weekend!

Our visit to Charbar also gave us an excuse to explore the East Village once again, an area we last spent some time in back in 2014. 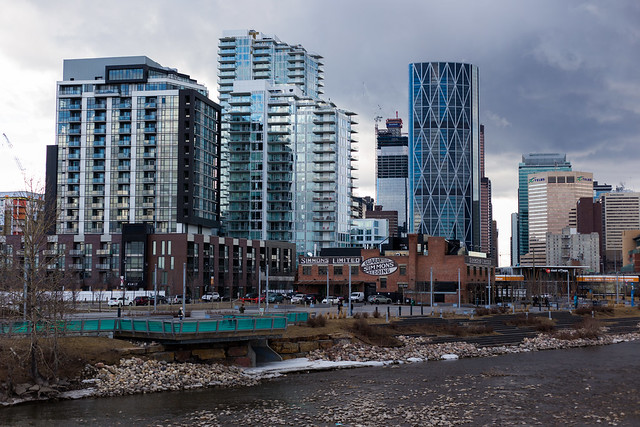 The East Village ARP notes that redevelopment of the area has “been a long-standing objective of the City of Calgary” and that the General Municipal Plan of 1979 encouraged residential development. From the ARP, here is the vision statement for the East Village:

“East Village will become a vibrant, humanly scaled and sustainable high density downtown neighborhood that respects and enhances its historical, physical and social context and reinforces a high quality of life for its diverse residents.”

The East Village area is 49 acres between Fort Calgary and the downtown and is where Calgary was founded. As development intensified elsewhere, the area was neglected for many years. But not anymore:

“Fast forward to today. East Village is in the midst of an exciting transformation. Since 2007, CMLC’s commitment of $357 million into infrastructure and development programs has so far attracted $2.4 billion of planned development expected to deliver $725 million of Community Revitalization Levy (CRL) for the City of Calgary, our sole shareholder. As developers and retailers have come to see the value of the East Village transformation, our available inventory of land has been snapped up. Today, just three parcels remain.”

You can see the current East Village ARP in PDF here. The City of Calgary is currently in the process of updating the East Village ARP, first approved in 2001 and last updated in 2010. That process has been underway for a couple of years now and is expected to wrap up later this year, with the draft available for public review this spring. 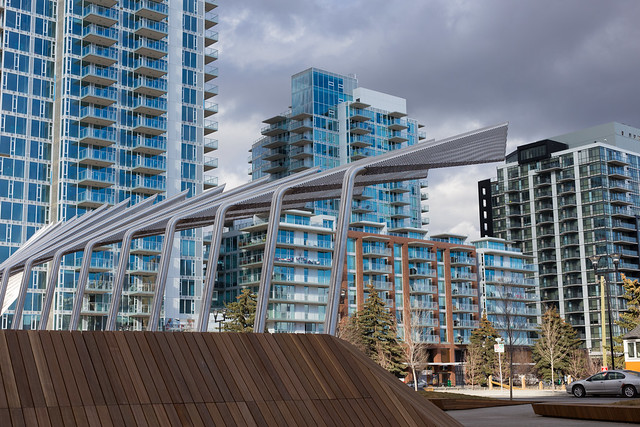 We made the ten minute walk to the East Village from our downtown hotel. We entered via 7 Avenue SE which meant that Celebration Square, or CSquare, was one of the first things we saw. It is meant to “provide a mid-day sunshine break to folks in nearby offices or residents returning home from downtown” and features a curved wooden bench, a small stage, and a striking design. “The Veil’s architectural baffles animate the movement of passing trains,” the website says.

This is the year of music in Calgary as they are hosting the Juno Awards this weekend. Later this year, the brand new National Music Centre will open in the East Village. Just a short walk up from CSquare, you can’t miss the NMC’s unique look. Construction on the project began in 2013:

“Designed by Allied Works Architects of Portland, Oregon, NMC is imagined as a living instrument, a destination and a new kind of cultural institution. The 160,000 square foot, $168 million project is being built around the historic King Edward Hotel – Calgary’s legendary home of the blues – and straddles 4th Avenue SE via an overhead passageway that leads to another vast building.”

A little further away we came across one of the community gardens that has been established in the East Village. Living in the East Village right now would be exciting with all of the changes taking place, but it will be a few more years before the urban village vision is realized. For instance, a grocery store is yet to appear, but one is coming. “The dream team of RioCan Investment Trust and Embassy BOSA are partnering to develop two new residential towers at 6 Avenue and 3 Street SE which will be anchored by a full-sized Loblaws store, as well as other retail tenants.” 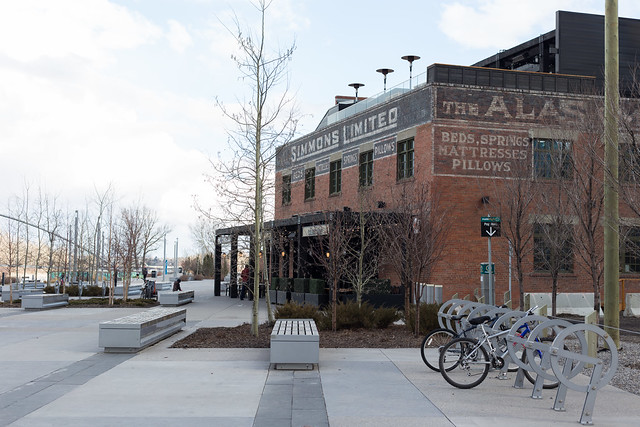 We were perhaps most looking forward to checking out the redeveloped Simmons Building, which just opened last summer and now features Charbar, Phil & Sebastian Coffee Roasters, and Sidewalk Citizen Bakery. Restoration efforts began in 2008 on the historic building:

“Formerly a factory warehouse for a national bedding manufacturer, the Simmons Building snoozed beside the Bow River for decades before CMLC took up the restoration challenge. The occupancy of the Simmons Building by three local food and beverage champions puts in place an important piece of CMLC’s retail strategy for East Village, which calls for approximately 100,000 sq ft of Village Format retail – a ‘boutique’ style of retail that tends to be more intimate and service-oriented than Urban Format retail, which in East Village will add up to about 300,000 sq ft and include such categories as grocery, home improvement and general merchandise.”

On a Friday night, the building was busy, and it just so happened that Edmonton’s own Poppy Barley was hosting a pop-up in the building that weekend! The bike racks were well-used and there were lots of people out enjoying the plaza. 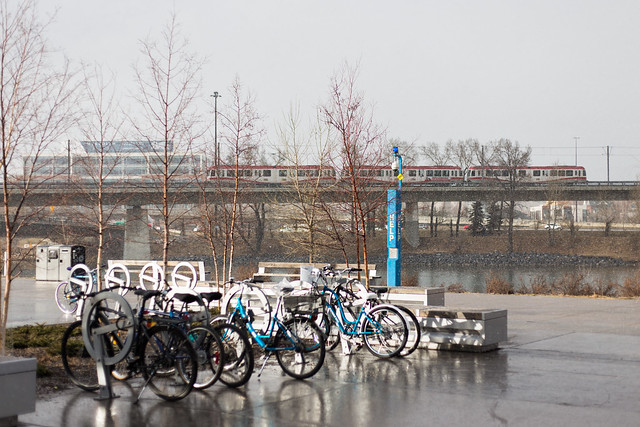 Inside the building, we had a great meal at Charbar! Our favorite dish was probably the picante dry-cured chorizo, served with pickled vegetables, but the entire meal was delicious. 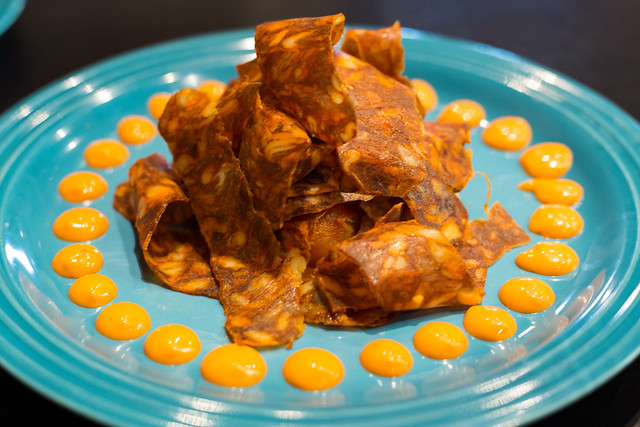 The inside of the building reminded me a lot of the Mercer Warehouse, with the exposed brick, beautiful wooden beams, and hardwood floors. With a Phil & Sebastian’s I could definitely see myself hanging out in the building frequently. 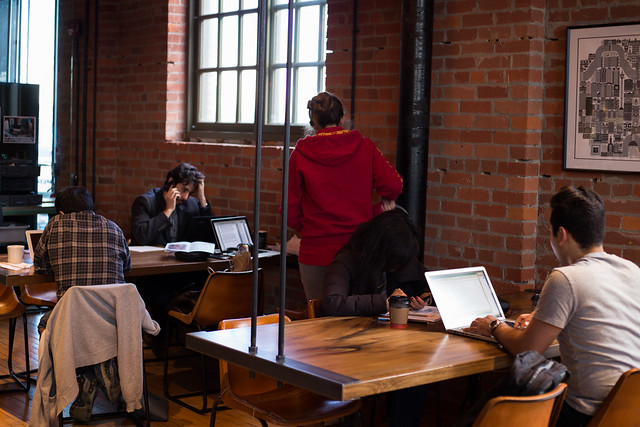 The Simmons Building is located right along the RiverWalk Plaza, part of a beautiful pathway that runs along the river and connects to Calgary’s larger pathway system. Before dinner, we walked along it and made our way to St. Patrick’s Bridge which has been nicknamed the “skipping stone” bridge. It was under construction the last time we had seen it. 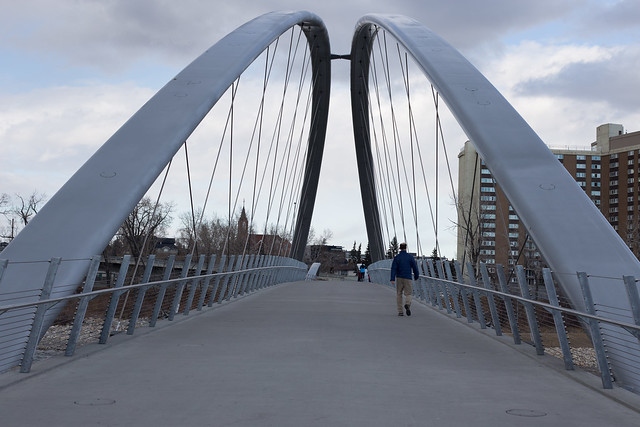 The bridge connects to St. Patrick’s Island which is described as “a beautifully revitalized 31-acre backyard.” Among its many features is Bloom, a public art installation on the west side near the bridge. 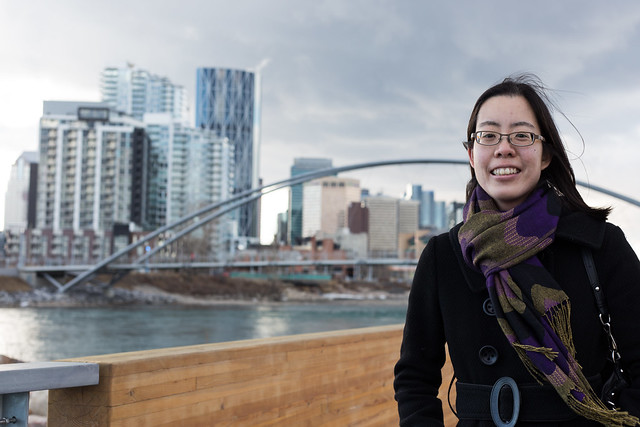 Our short walk back into downtown after dinner offered a great view of the colorfully lit Calgary Tower. It was a great evening in the East Village! We’ll definitely be back to see more of the area’s evolution. 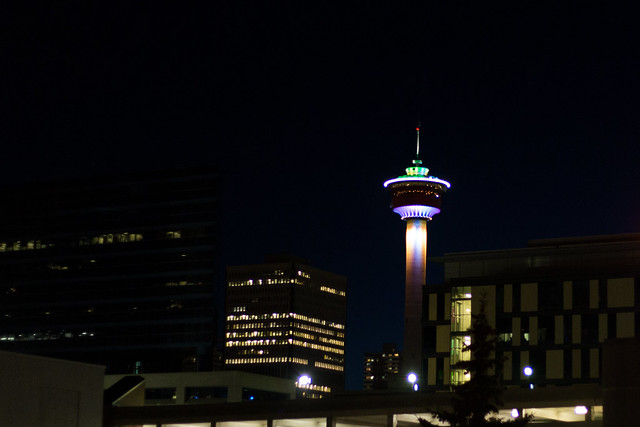 You can see more photos from our trip to Calgary here.