So far the opposition to these two proposals seems unanimous. Councillor Scott McKeen has called the proposals “ridiculous”. The Downtown Edmonton Community League has sent a letter expressing its concerns, as have numerous businesses and residents from 104 Street. Many more have shared their thoughts on social media, especially on the 104 Street Facebook page. Given this, it would be extremely bold of chief planner Peter Ohm and his team to approve these variances, or at least the one on 104 Street.

I too am opposed to the proposals, but perhaps not as vehemently as others. 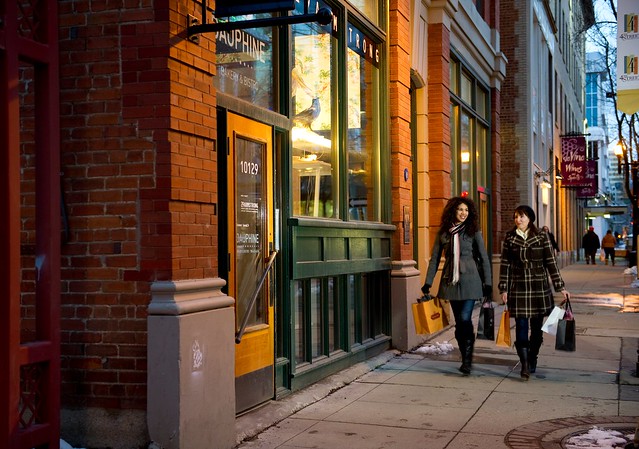 To me, noise and disorder isn’t really the issue here. Just as I don’t feel any sympathy for the people who buy a house near Anthony Henday Drive and then complain about traffic noise, I don’t feel any sympathy for those who bought a condo in the Fox Towers or any other nearby tower, just a stone’s throw away from the arena & entertainment district, with an expectation of peace and quiet. It’s simply unreasonable. This is the heart of our city and it should be a lively, vibrant place. I’m not saying that downtown should only be for singles or DINKs, but on the spectrum of neighbourhoods in the city I would not expect downtown to be at the slow and quiet end.

I’m also not convinced that a large bar is going to be so much worse than 20,000 people filing out of the arena on a regular basis and into the surrounding area, including plenty of people who have already been drinking all night inside the arena. I recognize that most events will end a lot earlier in the evening than a bar would close, and maybe the impact from arena patrons will be minimal. But I’m not sure that’s a bet I’d make.

We don’t know what kind of establishment would go into the Fox Tower. With an occupancy of 600 it is large, but far smaller than the combined occupancy of Knoxville’s Tavern and Studio 107 (formerly Oil City Roadhouse and Vinyl) at 1,600. Urban Sparq’s other properties include The Pint and Denizen Hall, both of which have much better reputations than Knoxville’s does.

As someone who has lived on 104 Street for five years, I can tell you it’s not always quiet or orderly now. Weekend evenings are frequently full of hollering from the throngs of people moving through the area, and I’ve walked around my share of puke. For the most part however, establishments on our street have been great neighbours. Most of the time you’d have no indication that Kelly’s Pub or Mercer Tavern or Cask & Barrel are on the street. They do a reasonable job of helping to make 104 Street the well-regarded area that it is and the new Purple Flag designation reflects this. I think a community working together to set reasonable expectations can go a long way toward preventing the kinds of issues that so many seem concerned about. But you need to have a dialogue to do that.

I think the way the proponents have gone about this is just ridiculous, and I think as a city we should use this as an opportunity to better define how we expect these sorts of proposals to come forward. Council squandered an opportunity to set expectations about large towers by approving the Emerald Tower last month, so I hope the City doesn’t waste this opportunity to demand more from developers looking to occupy those buildings. It’s unacceptable to avoid engaging the community and it’s even worse to try to hide your involvement altogether. It says a lot about the character of the proponents and is a major reason I am opposed to the proposals.

That said, the response from the 104 Street community thus far hasn’t been great either. The low bar set by the proponent has been matched with a “we must stop this at all costs” kind of approach, including action committees formed in many of the residences along the street specifically to fight this. Where’s the invitation for dialogue? Also, I don’t for a second believe that as many people checked the zoning before they bought into the street as one would gather from reading all the responses. NIMBYism is just as applicable downtown as it is in the suburbs, it would seem.

The most common refrain I have seen from those opposed to the proposal is that it is out of character with 104 Street and could undo the great work that has happened over the last 20 years. I have great respect for everyone who has had a role in making 104 Street what it is today, but to say that one establishment would destroy all of that strikes me as a bit alarmist. Especially considering the number of businesses that have failed on 104 Street or moved elsewhere in just the last five years alone.

The issue is not that a large bar is too dissimilar to the smaller, more intimate venues that we currently have on the street. It’s that a mega-bar like this would probably be more like Knoxville’s Tavern in that it would sit closed most of the time, meaning we’d have yet another downtown street front devoid of life. Paula wrote about this too:

“Giant big-box bars of this type tend to stay closed during the day — and sometimes during most weeknights. They often only open on Friday and Saturday nights. That means big hollow spaces sit vacant much of the week, draining life from the street. That’s not vibrancy at all.”

I get that the folks opposed are not saying they are opposed to vibrancy and business development in general. But it really comes off as, “as long as it’s vibrancy that we approve of.” Again, this could be an opportunity to identify what kinds of businesses we do want on the street and to then do something about it. How can we attract them?

Most of the discussion so far, as above, has been about the proposed bar for the Fox 2. There has been much less said about the bar proposed for the Mothers Music building, even though it is much larger and is potentially even more problematic. Consider that the building Knoxville’s Tavern currently occupies is slated to be demolished to make way for a new development and that the Subdivision and Development Appeal Board dismissed an appeal against the 388-seat Hudson’s that will open just down the block from The Pint on 109 Street. It makes sense to move the 1,000 seat Knoxville’s to the 1,400 seat Mothers Music building rather than to a smaller, more expensive location, and a proposal for a 600 seat bar on 104 Street at the same time seems like a perfect distraction. Instead of discussing whether or not we really want 2,200 licensed seats along the 109 Street strip from Jasper Avenue to 103 Avenue, the discussion is all about the supposed destruction of 104 Street. Which do you think would be worse for cleanliness, disorder, and safety? 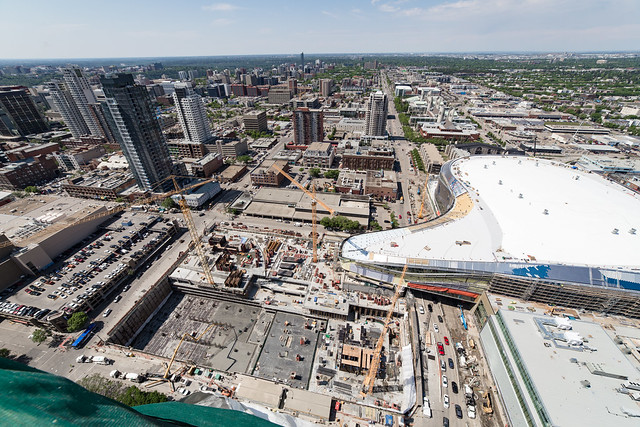 On the Edge, photo by Dave Sutherland

Furthermore, there’s a bigger discussion here we should be having about the impact of Ice District. Will event-goers really need additional places to party after the arena closes? Should those places be in the district or elsewhere in the downtown? What is the impact on policing, transportation, and other considerations for each approach? These are all important questions that need exploration.

As I said, I am opposed to both proposals in their current forms. I think they would result in less truly vibrant streets and I think we should make an example of them to set expectations and to encourage higher quality proposals in the future. I am disappointed in the knee-jerk NIMBYism on display here though, and I’m concerned it is distracting us from the bigger picture. I think it is really unlikely the City will approve these variances, and I hope that once the rejections come through, we can continue the dialogue on some of the related and very important questions that these proposals have raised.