Sharon and I usually take a vacation toward the end of September and this year was no different. We decided to stay in Canada this time however, and spent nine days in the Okanagan. Aside from a quick trip to Kamloops and Kelowna a few years ago, neither of us had been to the Okanagan since we were kids. I keep joking that it’s nice to want to go to the wineries instead of being dragged along!

We flew into Kelowna and spent a couple of days there before moving on to Penticton and then Osoyoos. It was an interesting time of year to visit as we found ourselves right between high season and the winter season when many things close until the spring. We were also able to enjoy the beautiful fall colors and relatively warm weather (it snowed here a day after we returned home). Along the way we met a surprising number of Albertans including a few fellow Edmontonians!

Our guide for the trip was Jennifer Cockrall-King’s book Food Artisans of the Okanagan. Combined with a bit of TripAdvisor, which I finally started adding reviews to, we had no shortage of things to see and do. You can see my full collection of photos on Flickr, but here are some highlights from our trip!

We of course spent some time in downtown Kelowna, walking along the marina and through Stuart Park. It’s a beautiful part of the city an well worth a visit. You can even see Ogopogo! 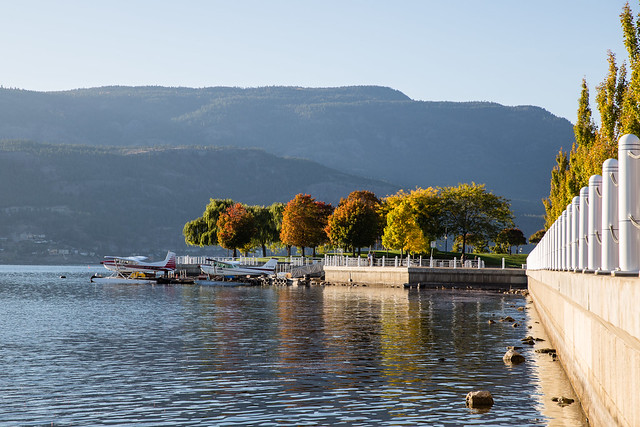 We saw dozens and dozens of fruit stands throughout the Okanagan but decided to visit one in Kelowna very early on in our trip. Paynter’s Fruit Market is located in West Kelowna (which we learned separated from Kelowna in 2007 and was designated a city in 2015). There wasn’t much left, but picked some delicious pears and apples! The Red Delicious looked purple on the tree and were very tasty indeed. 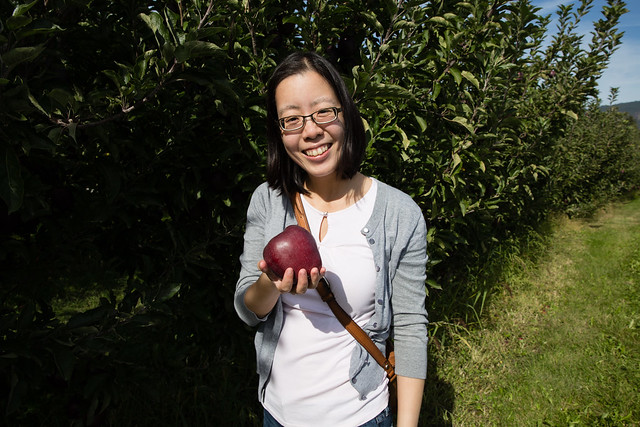 The number one Kelowna attraction in TripAdvisor is Myra Canyon Park, known for its historic trestle bridges. There are sixteen wooden bridges and two steel bridges that were once part of the Kettle Valley Railway that have been saved (and reconstructed after a devastating fire in 2003) and incorporated into an amazing pedestrian and cycling trail. It was not particularly easy to find or get to, but was totally worth it once we did. 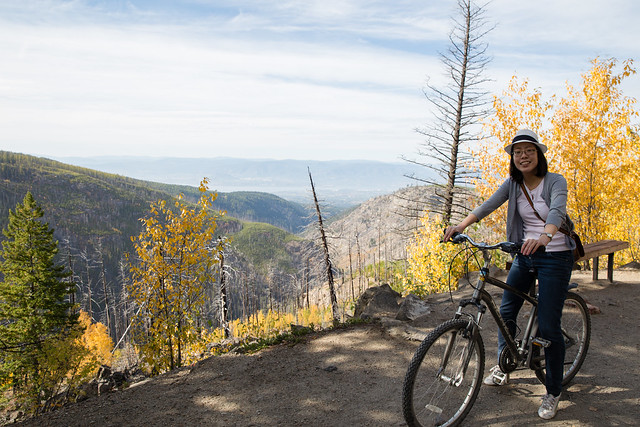 We decided to spring for the bike rentals and completed the entire 24 km circuit in about three and a half hours. The well-maintained trail was easy to navigate and the views along the way were spectacular. If you’re in the Kelowna area, don’t miss this! 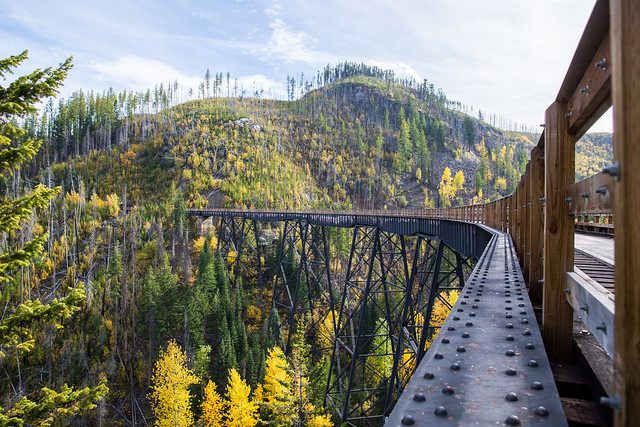 On our way out of the city we stopped at Hardy Falls, near Peachland. It’s a relatively short trail and the falls are not very big but we really enjoyed our visit. We were lucky to witness the annual Kokanee salmon run which meant the creek was full of bright orange fish! 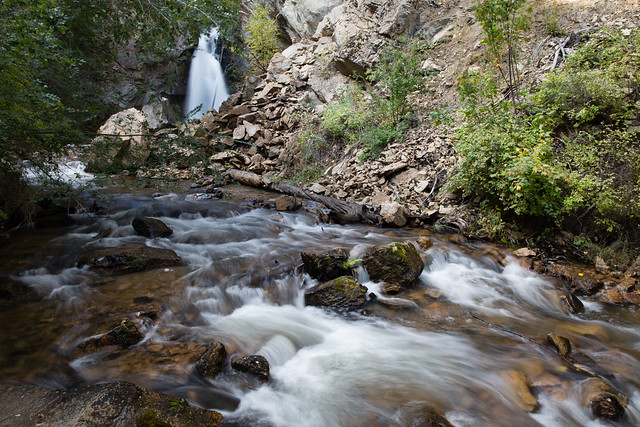 I don’t know why, but I wasn’t expecting much from Penticton and was pleasantly surprised at how much we enjoyed the city. This is the view from Munson Mountain which is on the east side of the city.

Penticton is bounded by Okanagan Lake to the north and Skaha Lake to the south. It was a bit too cold to go into the water while we were there, but we did manage to catch some amazing sunsets over the lake. 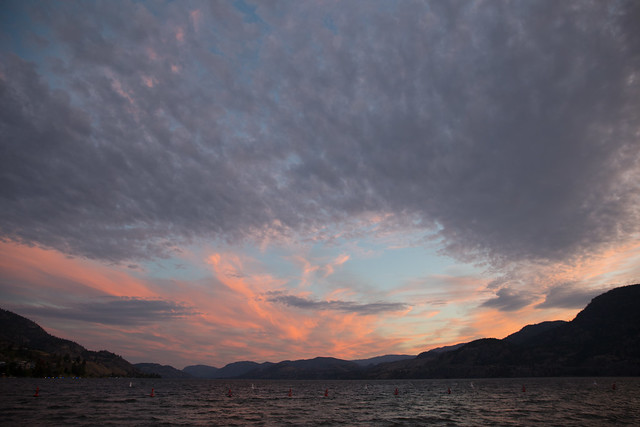 A short drive from Penticton in Summerland is the Kettle Valley Steam Railway. Knowing how much I love trains, Sharon made sure we didn’t miss it! 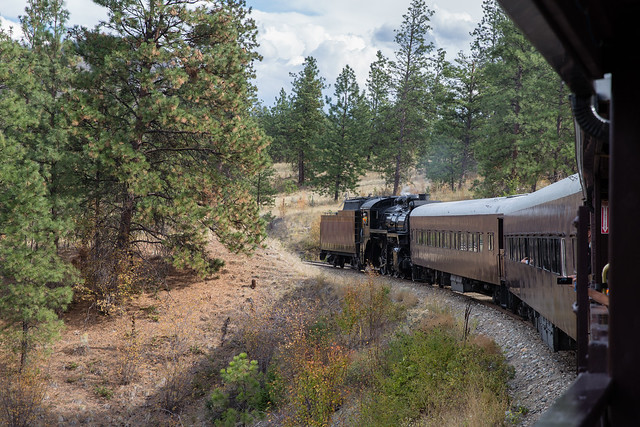 On our way back to Penticton we came across this orchard with apples covering the ground and I just had to stop to take a photo. This wasn’t the only fruit we saw on the ground during our trip, and it was suggested to us that the Okanagan Valley is simply over-producing. 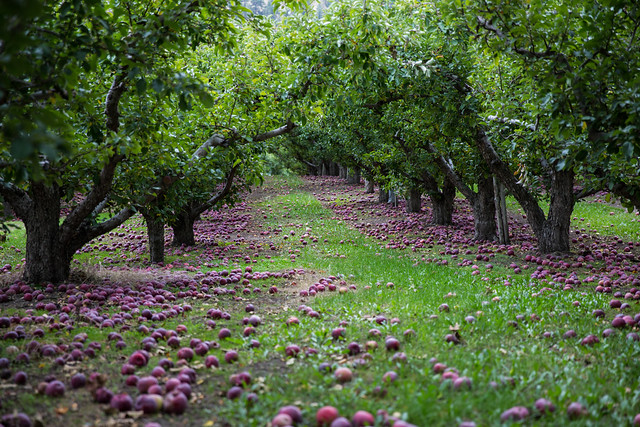 We realized that the Festival of the Grape was on in Oliver so purchased tickets and made a stop there on our way to Osoyoos. This was the 20th year of the festival which attracts more than 3,000 people each year. We enjoyed the wine tasting, Grape Stomp, and some food trucks too. 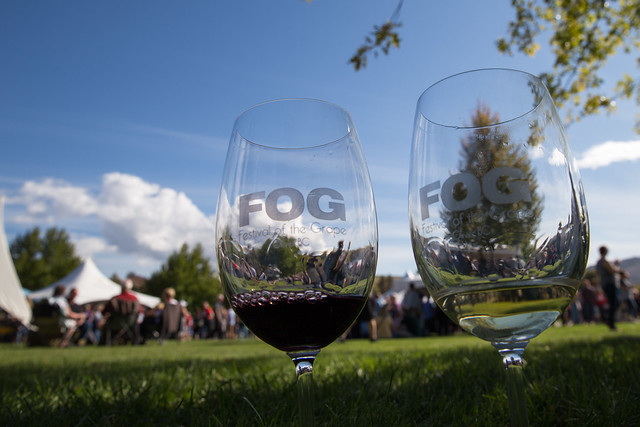 Just south of Oliver is where we found Steve and Dan’s Fresh BC Fruit farm. We buy from them every week at the City Market Downtown so we had to stop for a photo! 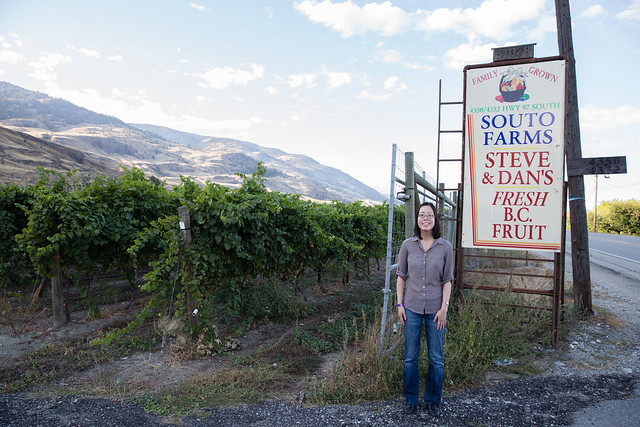 We spent a few days in Osoyoos staying at the Watermark Beach Resort, which had been recommended to us by a few people. I can see how it would be packed in the hot summer months but at this time of year it felt like we basically had the place to ourselves! It was a good homebase for our stay in the desert. 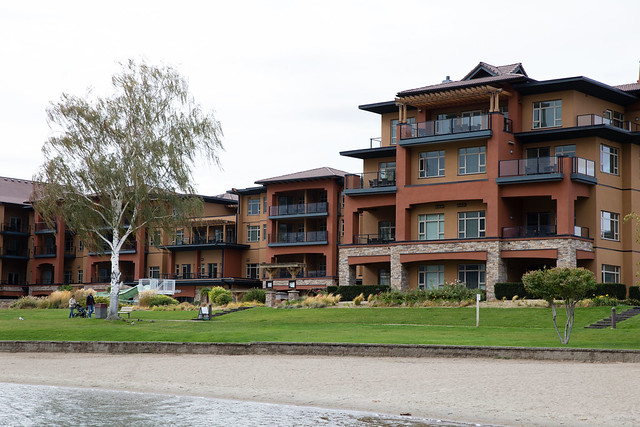 Osoyoos is pretty close to the Similkameen Valley so we took a trip there one day. The highlight for me was visiting The Grist Mill, a historic water-powered mill that has been painstakingly restored to its original 1881 operating layout and actually grinds flour for sale once again. We spent about an hour with Cuyler Page, the man behind the project. His passion was clear and we learned a lot, including that the site is basically the reason (along with the work of Page and Sharon Rempel) we have Red Fife wheat again today. 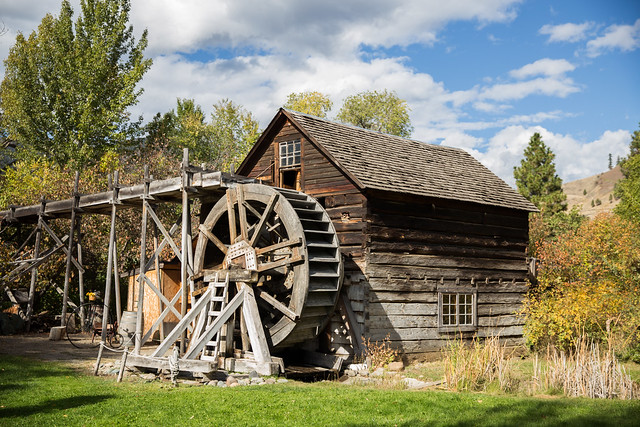 We stopped in Keremeos on the way home at Benja Thai, a restaurant that you simply wouldn’t expect to find in such a small place. It was great, and it was very busy too! Just before getting back into Osoyoos we stopped for a photo at Spotted Lake, which is a “saline endorheic alkali lake”. It’s also a sacred site thought by First Nations peoples to provide therapeutic waters. 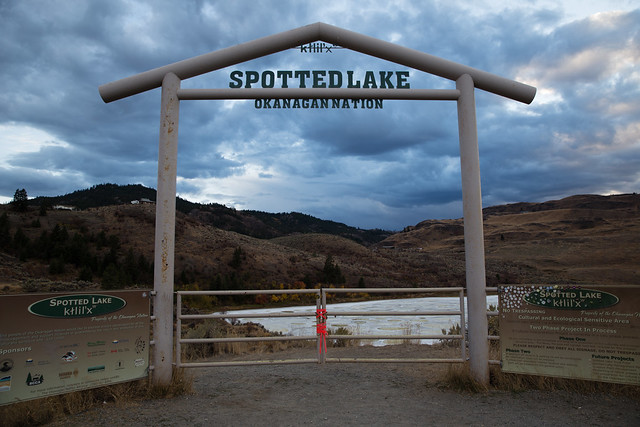 Before leaving Osoyoos we went on a tour of Nk’Mip Cellars, the first Aboriginal-owned winery in North America. Owned by the Osoyoos Indian Band, the winery is a small part of the 32,000 acres that make up the Osoyoos Indian Reserve. 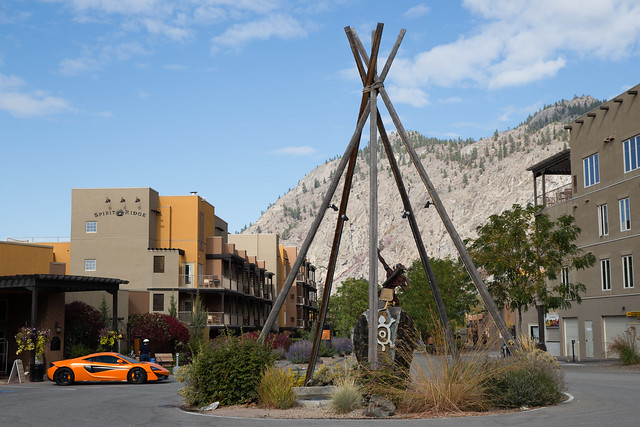 I was really happy that we made it to the final day of the season for Hammer’s House of Hog, a food truck in Oliver. We ate a delicious pulled pork sandwich and enjoyed the beautiful scenery in the nearby park. 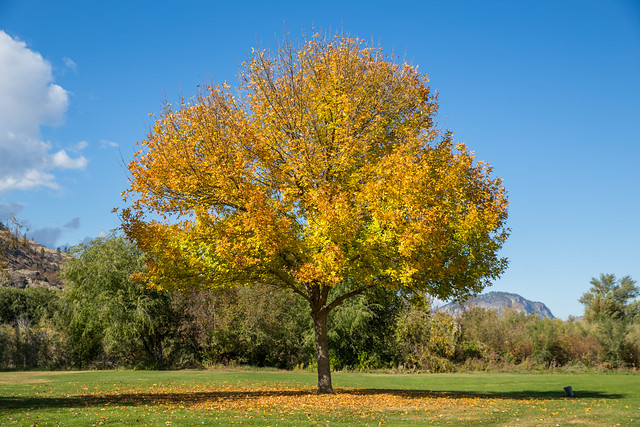 It was the fuel we needed to tackle the four hour hike up to McIntyre Bluff. It’s a well-known landmark with an elevation at the highest point of 673 m (2,208 feet). It’s also known to be home to bears and rattlesnakes, neither of which we ran into. 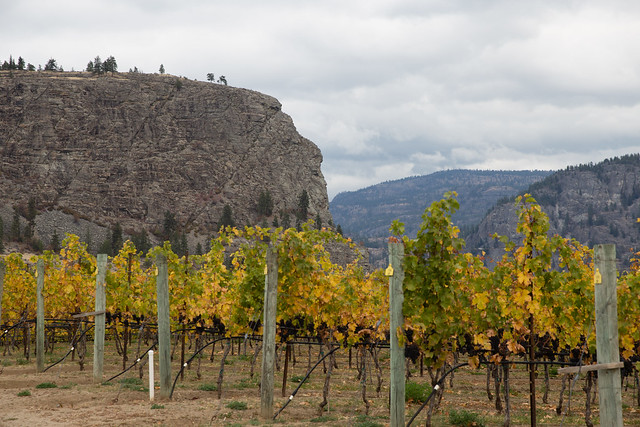 We’re fairly inexperienced hikers so it was quite the trek for us! I’m glad we did it though. It was really windy at the top but the views were great. 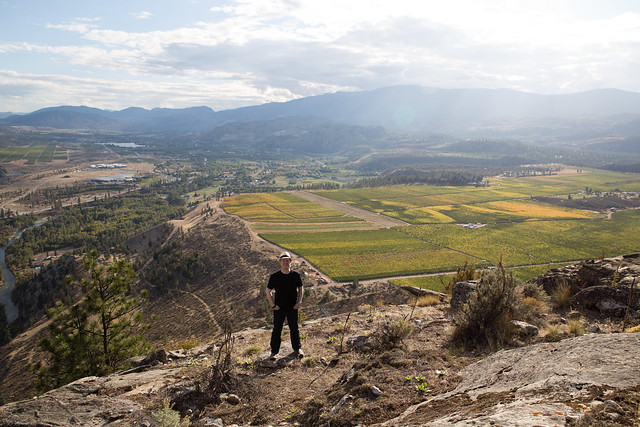 On our last morning we toured Covert Farms, an organic farm and winery. It was really interesting to hear how they stay grow more than 40 different crops organically, not to mention grapes. 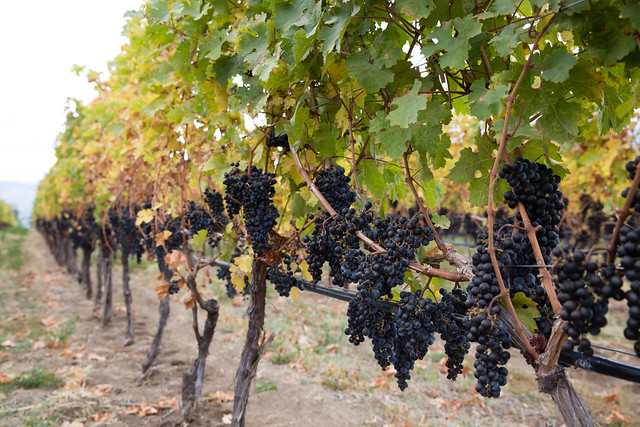 Like all vacations, it came and went too quickly, but we had a great time and learned a lot along the way! 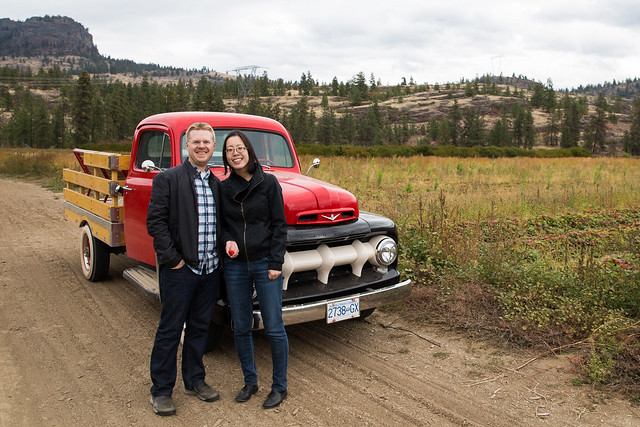 You can see my full collection of photos on Flickr. Stay tuned for more detailed posts from Sharon if you’re thinking of a trip to the Okanagan yourself!

2 thoughts on “Highlights from the Okanagan”