Tonight was Edmonton’s 33rd DemoCamp which took place at the Centennial Centre for Interdisciplinary Sciences (CCIS) on the University of Alberta campus. Here is my recap of DemoCamp Edmonton 31 from back in May. I presented with Karen at the last one in September and didn’t actually post about it! More on that later.

Flock is a web-based tool that crawls and analyzes a website to surface useful, actionable insights about your content. For instance, it can determine how many pages you have, if there are any broken links, and some general SEO information (it can also connect with your Google Analytics account). It can also tell you word counts, reading level, and other information about your content. Flock is geared toward agencies and developers who are building websites for other people. It looks very useful!

Instead of just walking through the features of the app, TradePros told a story from start to finish and worked the app into it. I loved it – their demo was very well done! TradePros is an app available on Android and iOS that connects homeowners with home improvement professionals. If you’re not very handy, you can use the app to connect with someone who can help you get the job done. TradePros currently has around 500 contractors, more than 1300 users, and have been live for five months. 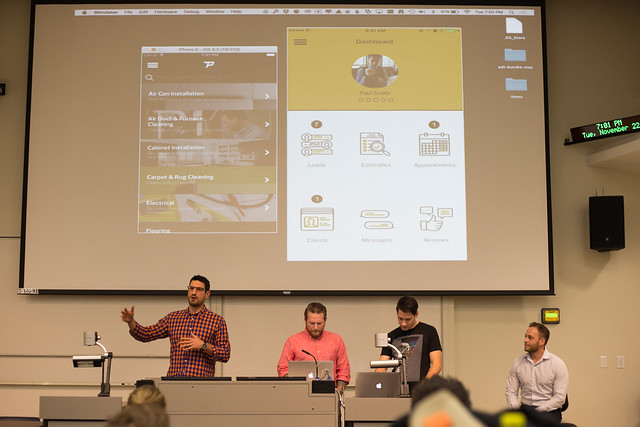 Cappsule thinks video is a better way to make recommendations so they’ve developed an app that is kind of like a video-oriented TripAdvisor or Foursquare. Users can upload 15 second videos tagged to physical locations. It’s available currently on iPhone, and so far users have left more than 1000 cappsules. The app uses Google Maps and Google Places API which means the geotagging should be pretty good.

The Lounge is a web app that helps business owners manage their IT infrastructure in the cloud. They’re focused initially on Windows platforms because that’s what most of their customers are using, but all of the technology they use is open source. Unfortunately, we didn’t get much of a demo, so I can’t say much more beyond that.

CargoTapp is kind of like an Uber for freight. It consists of two apps: one for the customer shipping products, one for the drivers doing the deliveries. It doesn’t appear to be for sending single packages, but rather palettes of cargo and other large deliveries. Pricing is based on current standard industry pricing based on distance, dimensions, weight, the type of truck being used, etc. CargoTapp is still working out how insurance will work, but they envision that truckers will be responsible, as they see themselves as a platform. 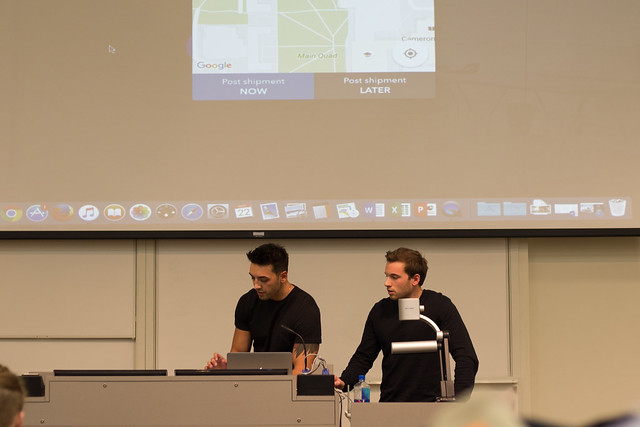 If you’re interested in demoing at a future DemoCamp, you can apply here. And because I neglected to write about it, here’s the list of demos from DemoCamp Edmonton 32:

See you at DemoCamp Edmonton 34!