Edmonton’s 36th DemoCamp took place at the Centennial Centre for Interdisciplinary Sciences (CCIS) on the University of Alberta campus tonight. Here is my recap of DemoCamp Edmonton 34 which took place in February. I missed #35 in March, but you can see the lineup here. 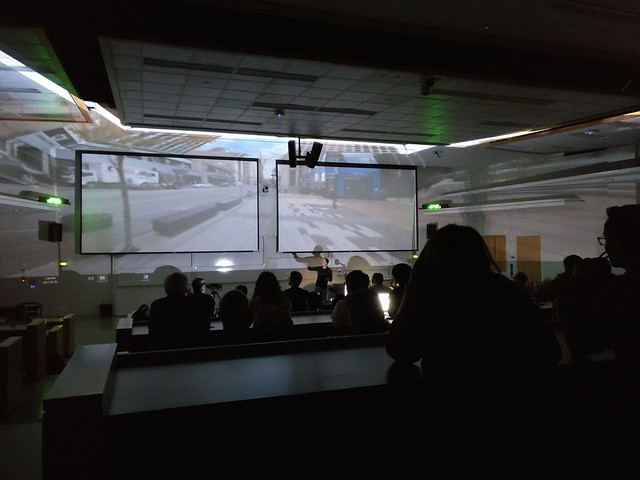 We had some really great demos, with a nice mix of apps, websites, and hardware projects. The demo gods must have been in a good mood tonight, because everything went fairly smoothly!

Blocky McBlockface is a side-project of RUN-WithIT which launched at Launch Party 7 back in October. Myrna and Grant showed us how they have used Google’s Blockly to help simplify their automation without needing to know how to code. They demoed using Selenium recorder to capture a test that could be triggered through a Blockly add-in they wrote which is a bash generator. Definitely the most nerdy demo of the evening, but interesting to see the attempt to turn programming and automation into a Lego-like experience.

Curtis and Jesse showed us MapsUp, which is “a drop in HUD for cars that requires no variation from traditional navigation workflow once setup.” It is designed to get directions from your phone to the hardware that sits on the dash which displays them off the windshield, giving you a transparent heads up display. It has the ability to automatically adjust for ambient light, so it works during the day too. Future improvements will focus on notifications and enriching what is displayed. They were inspired by an app that was doing this with the now-dead Pebble smartwatch and they built it in a 36-hour hackathon and said Bluetooth was probably the most painful hurdle to overcome. Very cool stuff.

Next, Eric and Nathan showed us Traktion, which attempts to improve the experience of both promoting and finding local live music. The site lets you browse performances, venues, artists, and more in your area but the current version is really targeted at organizers and performers. They can use the site to create attractive profiles, request and book events, and sell tickets. Traktion aims to let performers “create a profile in 30 seconds or less” by pulling in data automatically from Facebook, Instagram, Spotify, and other services. They hope to add additional APIs over time and to improve the listener experience. The backend of the site is written in C#, while the frontend is using Aurelia. 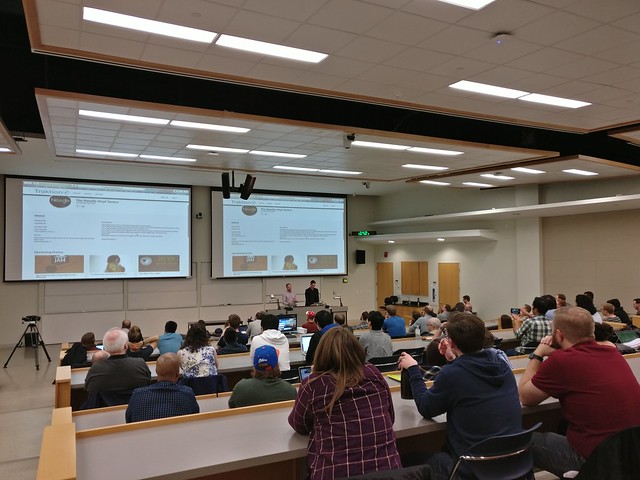 Bootmark is an app that aims to make it easier and richer to share your favorite locations with friends. When you make a post, you pick a specific location on the map, and then you can share a note, photo, or video. You can follow other users and they can follow you. The app is in alpha right now in TestFlight while they are working to build out the functionality further. In the demo, they dropped a pin on Hudson’s Bay and uploaded a photo of the room, illustrating that there’s no restrictions on where you are when you make a post. Interestingly they positioned this as a way to tackle privacy concerns. The app is currently on iOS and they’ve started porting it to Android. They hope to work on integrations with Foursquare, Instagram, and other services in the future.

Gordon showed us iSports Live, an iOS app that delivers highlights for your favorite professional sports to your phone. When you open the app it shows you a list of games for today. Simply choose which ones you want to be notified about, and the rest happens behind-the-scenes. The web spiders that power iSports Live (built in Python) will look for highlights and deliver them as notifications to your device. In the future, Gordon hopes to expand from general game highlights to filtering notifications for specific players. He’s also starting to take advantage of iOS 10’s richer notifications.

Ryan introduced Full Circle Visuals’ demo as something “fantastically complicated, which is why its cool”. To succeed in 360 video he told us, you need a camera that can capture very high resolution video. They have built a rig with six Sony DSLR cameras outfitted with fisheye lenses. Software then “magically” takes the six videos and stitches it into a sphere, which you can look at inside the Oculus Rift or other devices. But that’s an individual experience, so Ryan has been working on projecting the video instead, and that’s what he showed us. Five years ago this would have cost hundreds of thousands of dollars to get all the equipment, but thanks to Moore’s Law that has come down dramatically. Ryan predicts that in the next five years or so you’ll be able to buy a 360 projector that you can install on your ceiling specifically for 360 video. It was an impressive demo made stronger by Ryan’s clear passion and energy for immersive video! 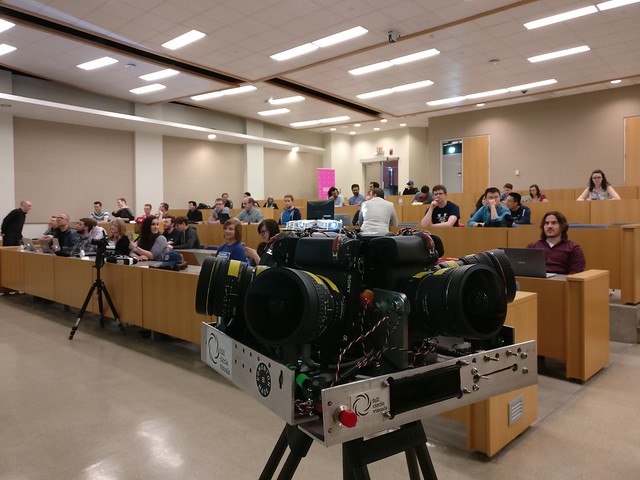 I think the Full Circle Visuals demo was my favorite tonight. It’s so great to see that we have leaders in this still emerging field of visual storytelling right here in Edmonton. I also really enjoyed seeing MapsUp and Traktion, both of which are going to face a lot of competition but are off to a solid start.

If you’re interested in demoing at a future DemoCamp, you can apply here. The next event is scheduled for late summer/early fall, so enjoy the summer break and get working on some cool stuff!

See you at DemoCamp Edmonton 37!