I was really glad to have had the opportunity to attend PodSummit 2018 on Saturday, May 5 at CKUA in downtown Edmonton. About 100 “podcasters and the podcast-curious” attended the event to learn about starting a podcast, making it sound amazing, growing an audience, and creating content that listeners will love. Organized by Ernest Barbaric, the sold out event featured six sessions punctuated by ice-breakers and other fun activities. Every single talk was interesting and informative, so well done to the organizers and speakers on knocking it out of the park! 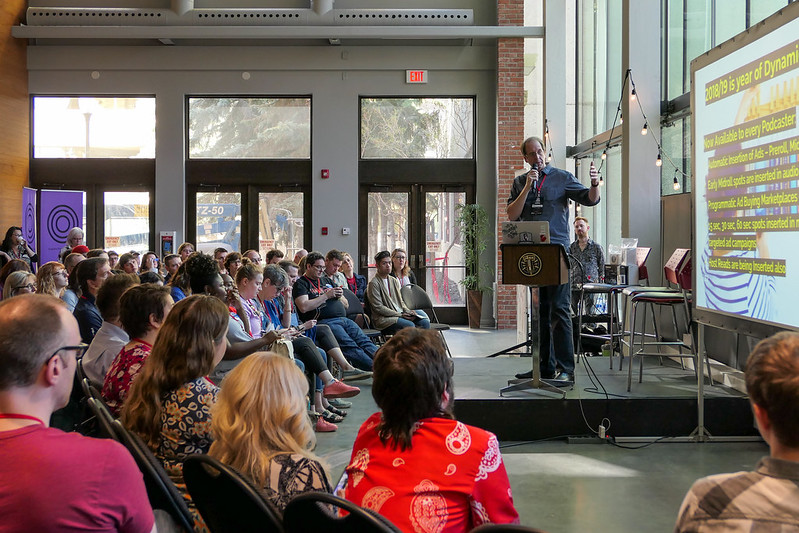 Before I share some of my notes from the day, you might be wondering why I (as primarily a blogger) would attend an event about podcasting!

I started a podcast in 2013 with Graham Hicks called Mack & Cheese. We published 59 episodes before calling it quits and moving on to other projects. But my history with podcasting goes back much further, to 2004 when I launched a podcast called Blogosphere Radio before we even called them podcasts (we just called it a show). That helped me to see an opportunity, and in 2006 I launched Podcast Spot, a hosting service for podcasters. We ended up shutting it down a couple of years later.

Reflecting in October 2008 on what I might have done differently, I wrote:

“There’s a ton of things I might have done differently, but two things in particular: I would have avoided using the word “podcast” in the name of our service; and, I would have focused on sharing audio and video for a specific niche.”

At the time, podcasts were very associated with the iPod, and they were fairly difficult to work with. You still had to plug your device into a computer to sync the audio files! It was far from certain that podcasting would take off. Today it seems almost silly to question the success of podcasting, given the popularity of podcasts like Serial and The Daily, the latter of which apparently averages about 1 million listeners a day (and I am one of them).

Here’s what we learned at PodSummit

PodSummit reflected the current state of podcasting with a much more diverse audience than the geeks and old white guys that were common a decade ago. There was a good mix of podcasting vets and newbies.

The day started with Rob Greenlee‘s State of the Podcasting Union. He noted there has been “steady growth” but thanks to media coverage there’s “a perception that things are exploding.” Rob cited The Infinite Dial Canada, a new study of consumer behavior and media consumption, and noted that 61% of Canadians 18+ are familiar with the term podcast. There are something like 525,000 podcasts in existence, about half of which are active, with maybe 2,000 new ones added each month. The number of listeners for all of those podcasts could get much bigger in the months ahead as both Google and Spotify are ramping up their activities in the space. Rob finished by suggesting that dynamic ad insertion will be a big thing for podcasting in the year ahead. 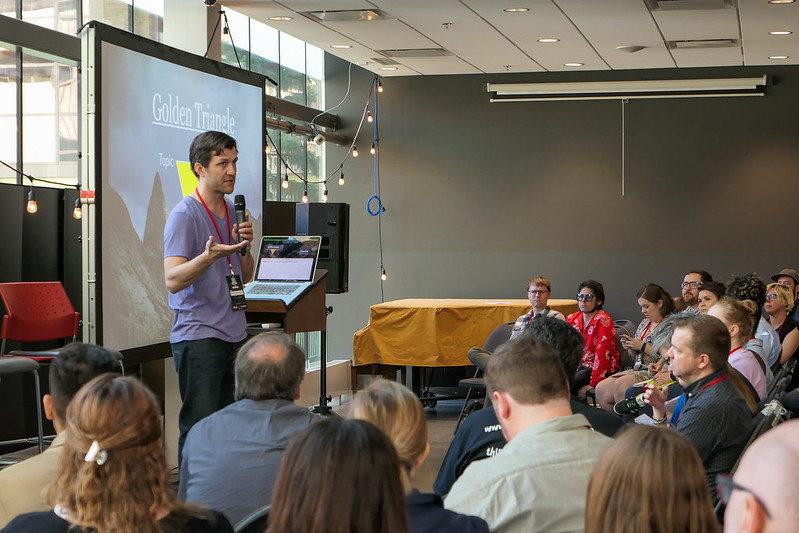 Next up was Roger Kingkade who shared tips on how to design a successful podcast. “People will listen,” he said, noting that both David Letterman and Howard Stern amassed large audiences even though their topics don’t at first seem that interesting. “You are what will connect with the audience.” Here are his tips for podcasting success:

Topic, Audience, and Perspective form the golden triangle for your podcast, he said. Roger suggested planning your podcast (one tool you could use is Karen’s Podcast Canvas) to ensure you focus on answering the right questions. 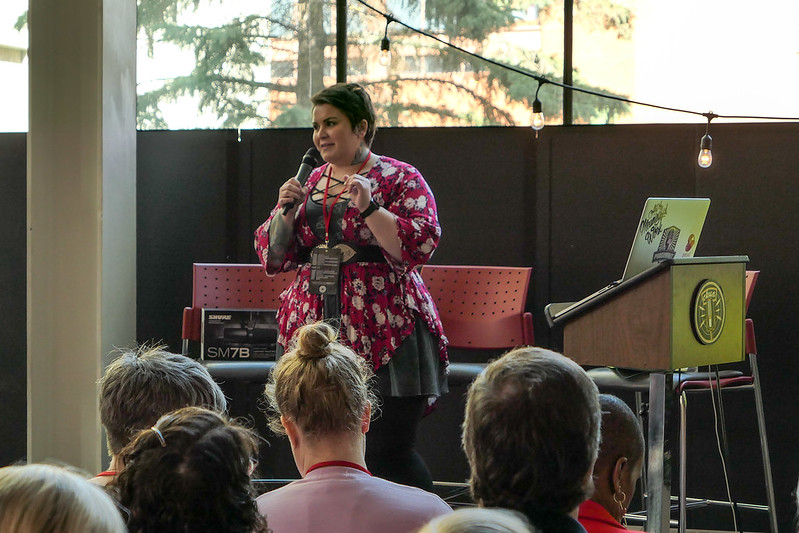 The final session of the morning was from Andrea Beça, who shared her tips on growth & promotion strategies. She echoed the importance of fulfilling a need or solving a problem with your podcast. “Podcasts are not an ‘if you build it they will come’ kind of thing,” she told us. It takes work, and you will put “way too many” hours into creating your podcast! Building your community is key to building your podcast, and Andrea shared a number of useful suggestions like choosing the right social media channels for your audience, thinking about visuals to help promote your work, and keeping tabs on previous guests to support them (and have them support you back). Speaking of guests, Andrea said to choose them wisely, and noted that the first 40 listeners will do more for you than your next 400, so honor them! She also said it is ok to reference past episodes, something that too many people are surprisingly reluctant to do. “Don’t let your content die,” she said. 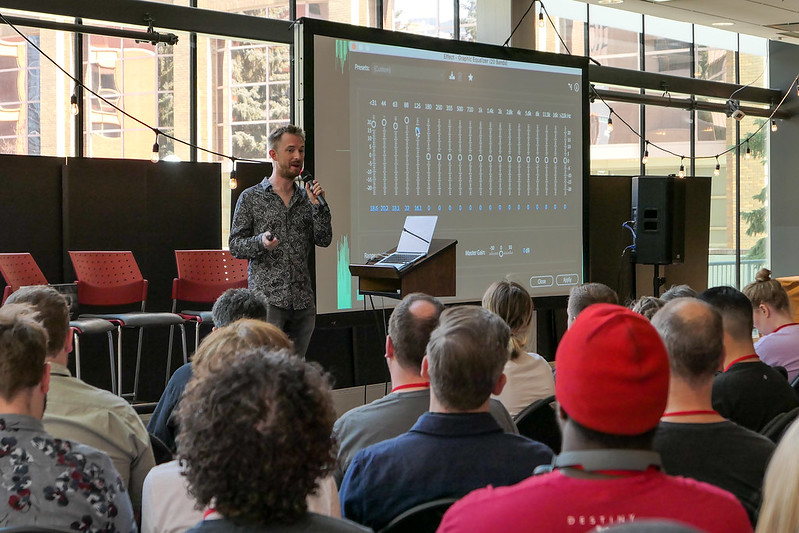 I skipped lunch, but I understand that Ernest himself gave a great talk on how to start a podcast.

After lunch we heard from Mike Russell, who gave a masterclass on editing and production. His tool of choice is Adobe Audition, so that’s what he used to illustrate his tips:

Mike was a great presenter, and I loved the approach he used, handing off to his pre-recorded self to demo things. 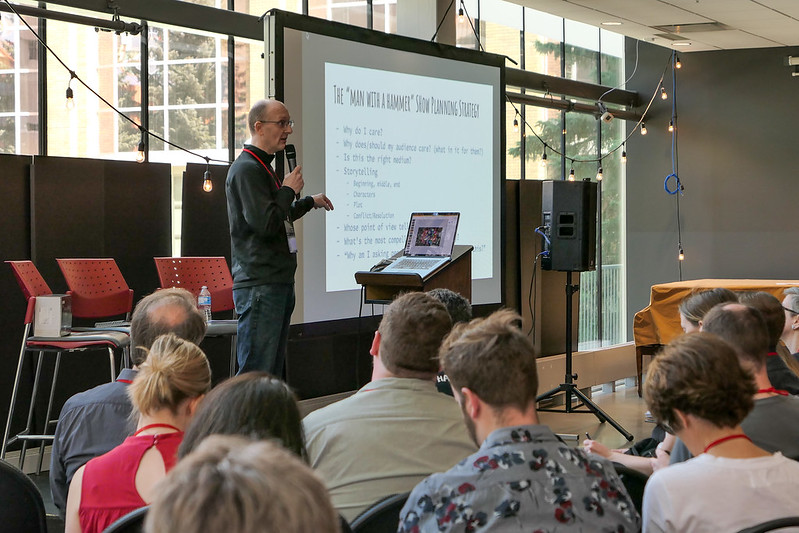 Next up was Andreas Schwabe who spoke about the art of podcasting. He’s a former teacher at NAIT and was the Director of Digital Media for the Oilers. He had some fantastic tips and suggestions:

Such a fantastic talk. 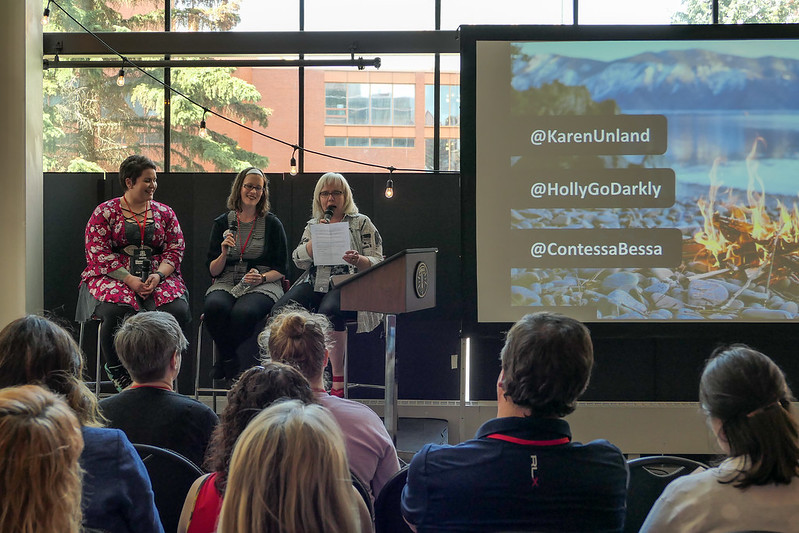 The final session of the day was a monetization campfire chat featuring Andrea Beça, Erika Ensign, and Karen Unland. It was a great chat on the three legs of the podcast monetization stool: sponsorship/ads, listener support, and feeding your business. They noted the chances are good that while you might earn enough to cover your costs, earning enough to cover your time is a whole other thing. The fact is, many podcasts are labors of love.

As mentioned there were some great activities throughout the day, like Podcast Bingo. It was a fun way to move around the room meeting other people and learning a thing or two about them or their podcast. I also liked the Pitch It Forward activity that Karen from the Alberta Podcast Network hosted, which got people to pitch other people’s podcasts!

It’s really encouraging to see such a strong podcast community here in Edmonton. If you’re pod-curious, I encourage you to check out the Edmonton Podcasting Meetup. And if you’re looking for some great local podcasts to listen to, be sure to read the Alberta Podcast Network’s regular roundups. 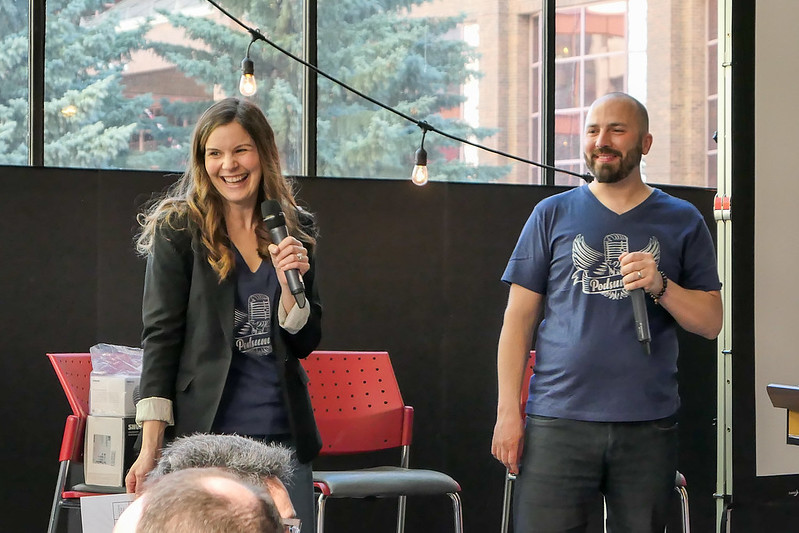 Congratulations to Ernest, his wife, their adorable daughter, and all of the other volunteers on hosting such a useful and successful event!

You can see the rest of my photos here.