Andrew Keen was the keynote speaker on the first day of the Cyber Summit last month, an annual technology conference organized by Cybera. They were gracious enough to host me this year as a guest. The theme for 2018’s event was “Mind the Gap: Surviving (and Thriving) in the Age of Disruption”. That’s exactly where Keen began.

“We are living through the age of disruption,” he said. 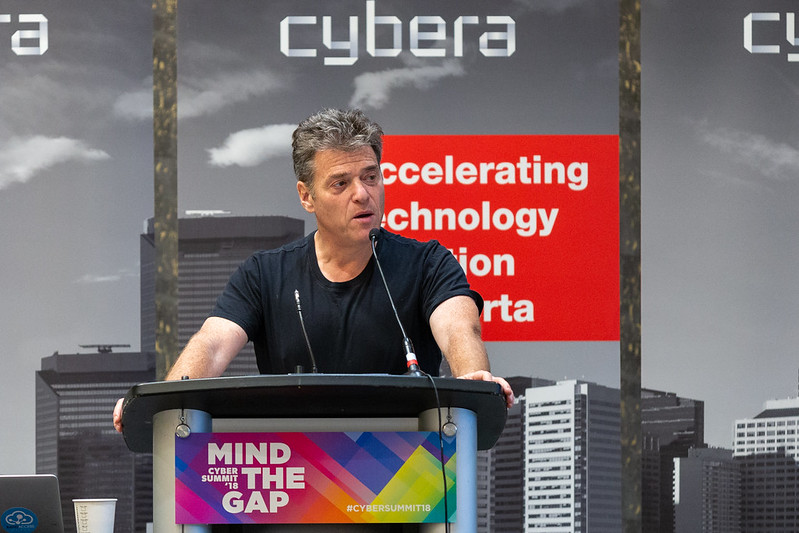 Keen is an entrepreneur who founded Audiocafe.com back in 1995, but he’s best known as an author and critic of Internet culture. I remember reading his first book, The Cult of the Amateur, shortly after it was published in 2007. As an entrepreneur myself (in podcasting) not to mention an early and enthusiastic adopter of Twitter, I remember strongly disagreeing with his critique of Web 2.0 and user generated content. It made me angry. I had read James Surowiecki’s The Wisdom of Crowds around the same time and I couldn’t believe how different Keen’s perspective was. Why couldn’t he see?!

So, it’s no surprise that I started reading Keen’s latest book, How to Fix the Future, with some hesitation. Would it rankle me as well? I hadn’t finished it by the time the keynote rolled around, but I had read enough to have an idea of what to expect. And I was looking forward to it.

“Is technology shaping us or are we shaping it?” he asked. Keen spoke about Marshall McLuhan, lamenting that technology was supposed to create a global village. “We were promised that the new business models were truly revolutionary,” he said. We’d have greater cultural understanding, more jobs, and more equality. But, “something has gone wrong” and that promise “for the most part, has not been realized.” There have been other unforeseen effects too. He thought McLuhan would be “amused by the unintended consequences of technology.”

“I’m not a Luddite,” Keen protested. “I’m not suggesting there aren’t benefits of technology, that’s self-evident.” He also knows that there’s no going back. “Digital is the reality, for better or worse, and we need to make it work,” he said.

Not only has the promise of a better future not been realized, we’ve found ourselves with new problems to deal with. Inequality, the demise of expertise, the echo chamber, and privacy are all among the concerns Keen raised. “The inequality in economic terms is astonishing,” he said, predicting that there is a great jobs crisis on the horizon. Describing “surveillance capitalism” Keen suggested that “privacy itself is a potentially fundamental casualty.”

So, what to do about it? “We’ve been through this before” with the industrial revolution, he said. “We break the future and then we fix it; that’s what we do.”

In his keynote as in his book, Keen spoke about Utopia, written by Thomas More in 1516. It was “a call to arms, to make the world a better place,” he told us. It’s a useful way to frame his argument that each of us has a responsibility to be a part of the solution. “We have to be careful not to fall into the utopian discourse of the first generation of web tech,” he warned.

Keen suggests we have five tools with which to fix the future: regulation, competitive innovation, worker and consumer choice, social responsibility, and education. He only spent a few minutes on these in his keynote, but elaborates on each in the book.

The section on regulation stood out for me. He compares the current state of technology to that of the automobile in the 1960s when the lack of safety regulations resulted in high numbers of auto-related deaths and injuries. He shared the story of how Ralph Nader’s bestselling book Unsafe at Any Speed brought the issue of traffic safety into the national discourse and led to the passage of seat-belt laws and other traffic safety measures.

Could something similar happen in tech today? I don’t know what the digital equivalent of the seat-belt might be, but I do know that not a day has gone by since I read the book that some sort of big tech-related problem hasn’t been in the news. New privacy breaches, new abuses of power, and new unintended consequences seem to dominate Techmeme these days, usually in reference to Facebook and Google.

“There’s no app to fix the future,” Keen told the audience. “The only way we fix the future is in a human way.” In the book he says, “technology doesn’t solve technological problems; people do.” It won’t happen overnight, and Keen was upfront about that. “It will take a generation or two, just like it did for the industrial revolution,” he said. “But we have to begin to address it now.” 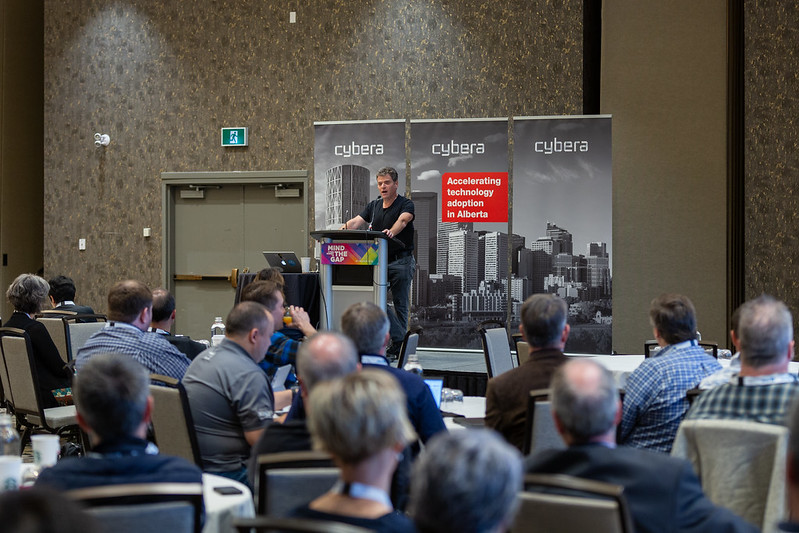 I have since finished reading How to Fix the Future and would recommend it. I think Keen raises some important issues and does indeed provide some thoughtful commentary on potential solutions.

Many in the audience found Keen’s keynote to be a downer, and there were plenty of comments about it being a pessimistic start to the conference. He certainly prompted a lot of discussion among attendees, which is all you can really ask for from a keynote.

But I found myself on common ground. Maybe in the decade since I read his first book I’d become more critical of technology, or at least more aware of the possible negative consequences. Maybe Keen had mellowed somewhat, adopting a more pragmatic approach in the hopes of effecting change. Or maybe, it was a bit of both!

Thank you to Cybera for hosting me at Cyber Summit 2018!