In his State of the City address (available here in PDF) yesterday at the Shaw Conference Centre, Mayor Don Iveson said there are four crucial “pipelines” that must be established in order to actively shape Edmonton’s economic future. The “export” pipeline, the “investment” pipeline, the “talent” pipeline, and the “innovation” pipeline are what we need for growth in Edmonton. 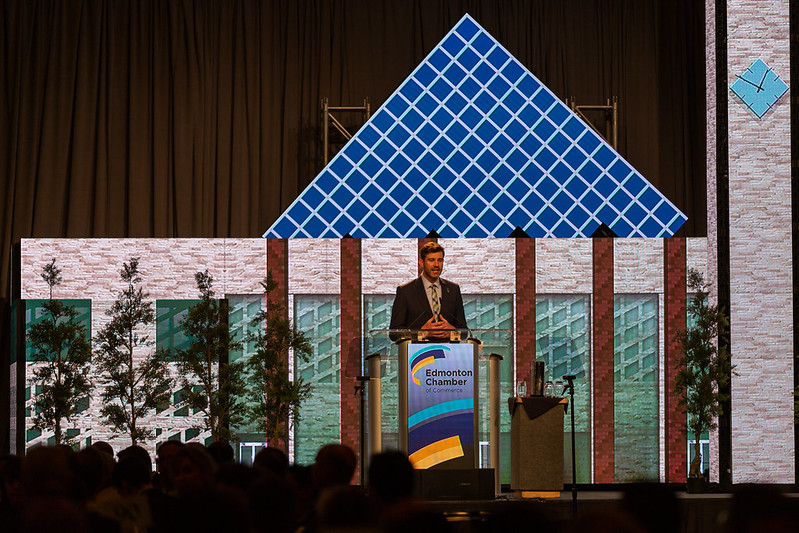 Most of what Mayor Iveson told the packed room was simply a rehash of ideas he and other local leaders have been sharing for years, updated to use the startup language of the day. What was different this time was the very specific audience he was speaking to. It wasn’t a speech for all Edmontonians, or for community leaders, or even for the business community. Yesterday’s speech was targeted squarely at local investors.

“As it stands right now, we don’t have enough local investment committed to our local innovation ecosystem,” Mayor Iveson said. He noted that too much local money is being sent out of the city to be invested elsewhere. “I’d like to change that dynamic.”

We need Edmonton’s investor class to get engaged

“It doesn’t always look like one might expect. It’s not always dressed in bankers’ suits. It’s not always flashy like in other cities. It’s more reserved and quiet. But it’s deeply committed to this community.”

“A lot of you are in the room today,” he said. “You’ve built your companies in dynamic and creative ways, you employ thousands of Edmontonians and you are proud to call this city home.” Mayor Iveson outlined three key reasons why the investor class should invest locally:

“There must be a willingness from our community to place some bets on local innovations, on local entrepreneurs, on local talent,” Mayor Iveson said.

There are billions of dollars under management right here in Edmonton, but startup funding remains elusive. As one example, AngelList currently shows 16 investors from Edmonton with only 11 of those having actually made investments. Mayor Iveson mentioned just one seed fund by name, Panache Ventures. The situation is much better than it was back in 2006, but to say there’s room for improvement would be a huge understatement.

“I recognize I’m asking a lot of you, especially in this fragile economic climate,” he said. “But this is Edmonton’s moment, and your city needs your engagement and support more than ever.”

We need a bigger startup funnel

Noting that Startup Edmonton currently assists about 65 companies per year in their startup phase, Mayor Iveson said “we need to drastically increase the number of companies coming into the ecosystem funnel.” By this time next year, the mayor wants “to at least double the number of start-up companies that are assisted on an annual basis.” To do this, he will be asking City Council and both public and private sector parterns “to make sizeable investments” to help expand the size of the startup funnel.

This is a familiar refrain locally, especially in the tech sector. Increasing the number of startups in Edmonton is of course the whole reason for Startup Edmonton, an initiative that Mayor Iveson has long been a supporter of. Many other initiatives in recent years have focused on increasing the number of local entrepreneurs. Even in last year’s State of the City address, Mayor Iveson talked about the need “to focus on how we take local start-ups to the next level — to zero-in on adopting a scale-up mindset and build a scale-up community that helps our small enterprises grow confidently.”

This time, Mayor Iveson reiterated the importance of local investment. Edmonton needs more than just more companies, he said. “It also needs larger amounts of early-stage capital to help our entrepreneurs go from start-up to scale-up and beyond.” 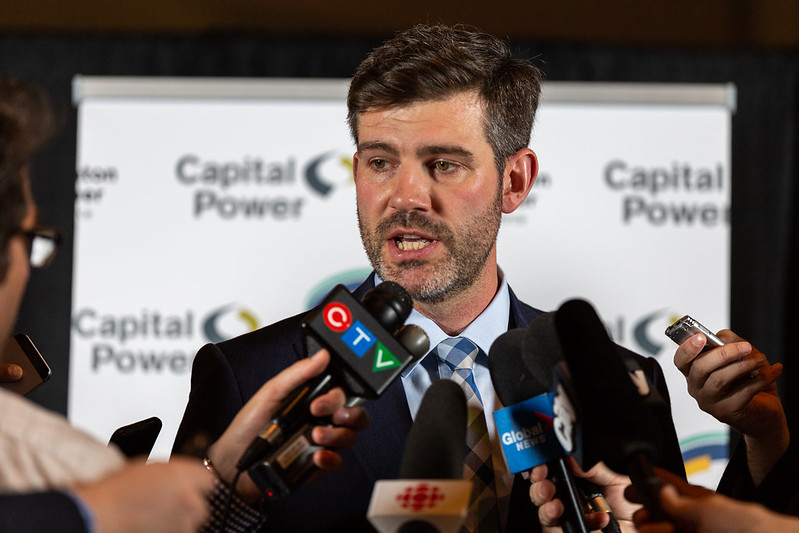 We need to hustle

One of the key messages Mayor Iveson focused on was the need to hustle. “Edmonton has experienced incredible external pressures before, and we have always managed to adapt and get by,” but that’s not good enough anymore, he said. Recent trips to San Francisco and Asia showed the mayor just how hard we need to work just to keep up, let alone get ahead. “From the moment you hit the ground in these places, the hustle is on.”

We have heard this before. When Brad Ferguson took over as President & CEO of EEDC in 2012, he was already sounding the alarm about complacency, calling it “our number enemy.”

This time though, the mayor got a bit more specific. “Today, we have one of the best AI research institutions in the world but we risk being outspent and out-hustled by other provinces and other cities,” he said. While there’s a role for government, “there’s also a significant role for local investors and philanthropists.”

We’re a world leader in the science of artificial intelligence, and we need to aggressively build on that.

We need a bigger talent pipeline

More talent is going to be critical for Edmonton’s growth. “We know we have work to do in terms of developing skilled talent — both locally grown, and talent that we attract from elsewhere,” Mayor Iveson said.

Again, this is not new. At the EEDC Impact Luncheon in January 2016, Brad Ferguson told the crowd that “the most important thing we can do is continue to invest in talent.” In September 2014, the Edmonton in a New Light event touched on the same ideas – be less humble, go tell the world, attract people and investment – but used different language. “The opportunity before us is to let the rest of the world in on the secret of why we’re all here,” Mayor Iveson said at the time.

The mayor did announce yesterday a new partnership with EEDC and LinkedIn “to do a deep dive on Edmonton’s talent landscape” to better understand “the kinds of skills we’re missing to grow our innovation ecosystem.” Based on that, the City will craft “an Edmonton story that is compelling, honest and attractive” and that highlights “the incredible quality of life we have here.” Plenty has been written about our city’s branding efforts and missteps, so while I applaud a more data-driven approach, I find it hard to believe this time will be different. 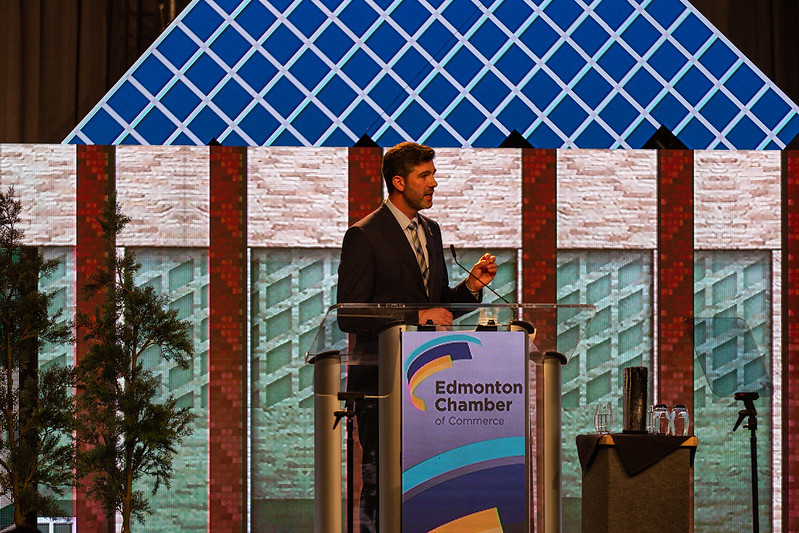 We need to sell to the world

Mayor Iveson said that for sustained growth in Edmonton, we need more businesses with a focus on exports. “Companies that aren’t satisfied to stay local, but want to scale up and take their product or service to customers around the world,” he said, and cited Stantec, PCL, Yardstick, Showbie, and BioWare as examples of local companies that “opened global markets through relentless quality and ambition.”

This focus on global should be very familiar by now. Shortly after he won the 2013 election Mayor Iveson started using some new language, “innovative” and “globally competitive” in particular. And even then Mayor Iveson was talking about solving local problems and exporting the solutions to the world:

“As problem solvers, we can do our business cleaner, greener, cheaper, faster and safer – and sell those solutions to the world. This is how we will ensure that Edmonton will compete globally, and endure long into the future, no matter the price of oil.”

He mentioned the new direct flight to San Francisco as one of the ways to enable more exports. “Although we’re in a digital world, the face-to-face meeting is still a vital commodity when it comes to engaging advisors, connecting with partners and making deals,” he said. The flight will be “a tremendous enabler for more Edmonton-made businesses, with global ambitions, to reach beyond Canada.”

We need to use the City as a lab

After talking about the challenges the City faces, Mayor Iveson said “I want to take the burgeoning community of technology minds in our backyard and unleash them on those City problems.” Earlier this month he introduced a motion to have City Administration outline a draft policy or program to make this a reality. And he said he would pursue a “Startup in Residence” program to connect startups with local government.

As early as 2009 the City was trying and failing to accomplish this goal, first with the Leveraging Technical Expertise Locally program. In his 2015 State of the City address, Mayor Iveson talked about Open Lab, “a new partnership with Startup Edmonton that aims to solve municipal challenges in a more entrepreneurial way.” It sounded promising, but it has gone nowhere, and the City even took down its web page about the program.

“Let’s actively shape Edmonton’s economic future by leveraging our local tech talent to help make our established companies become as competitive and innovative as they can be,” the mayor said. He talked about his idea for an “Innovation Hub” downtown, a place to bring together “entrepreneurs, service providers, mentors, investors, talent and business experts in an environment specifically designed to encourage the creation and growth of companies.” In contrast to the manufactured office parks seen elsewhere, the mayor promised it would reflect “Edmonton’s lifestyle where innovation, entrepreneurship, the arts, creativity and vibrant urban life intersect.” 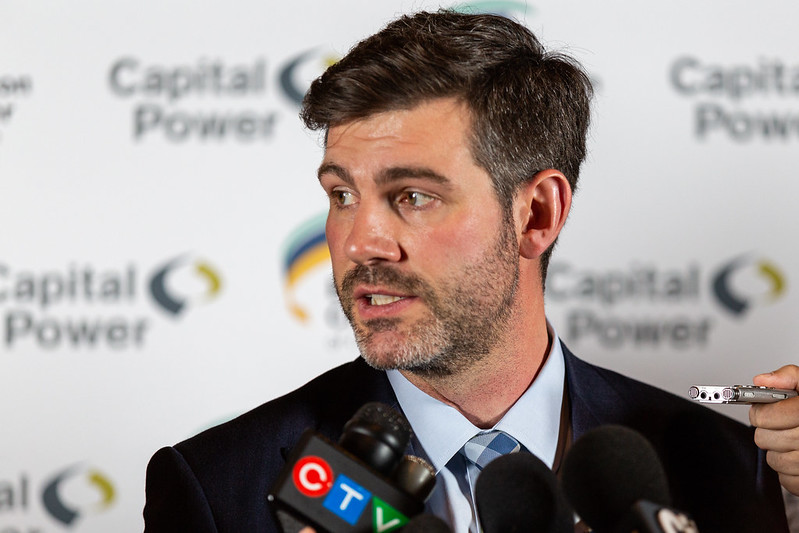 Growing Edmonton’s economy is the focus

Mayor Iveson made growing the economy a key election promise last year, so it makes sense that economic development was his focus for this year’s State of the City. Earlier this month he released a report on the Mayor’s Economic Development Summit, and his remarks yesterday built on that. Again, none of the ideas are particularly new, but perhaps by better involving local investors they’ll have a much greater chance of success.

“Edmonton is ready for this,” the mayor said. “Ready to get off the bench and play at a global level.”