Tonight local business leaders gathered in the EPCOR Tower to celebrate a changing city. Construction is happening all over downtown Edmonton, our population is rapidly increasing, and our economic growth is the envy of most other jurisdictions around North America. It’s time to shed our humble past and proudly talk about the new Edmonton, we were told. It’s time to “think positive, talk proud, and speak loud.” It’s time to see Edmonton in a new light. 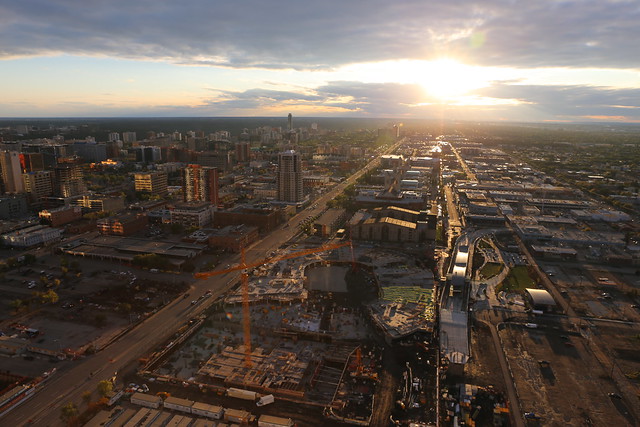 Mayor Don Iveson, EPCOR CEO David Stevens, EEDC CEO Brad Ferguson, and Westin General Manager Joumana Ghandour all took turns at the podium to share their story and their thoughts on why this is such an exciting time for Edmonton. “There’s a transformation happening here,” Mayor Don Iveson told us in a speech that sounded a lot like the ones he gave on the campaign trail during last year’s election. “Edmonton is humble, sometimes to a fault,” he said, “but that’s changing.”

The invitation for the event called it the “EPCOR Edmonton Business Leaders Reception”. I expected it to be similar to the 120th anniversary event that EPCOR hosted back in 2011, with brief remarks and a tour of the 28th floor balcony. But this event was much more bold and confident. Guests were invited to “celebrate Edmonton with EPCOR”:

“The opportunity for Edmonton to shine has never been better. Join our city’s business leaders as we begin the task of putting Edmonton in a new, dynamic light for the world to see. EPCOR President & CEO David Stevens and Brad Ferguson of EEDC invite you to a reception and viewing of the major construction projects in our downtown core from the 28th floor balcony of EPCOR Tower.”

In addition to the speeches, guests were treated to a sneak peek at some of the digital assets that EEDC and Make Something Edmonton have been working to create. “Edmonton is a billion dollar brand,” Brad Ferguson told us. “We just haven’t put much effort into it until now.” EEDC is working on the whitelabel video project and other assets so that Edmonton businesses can incorporate consistent messaging into their own brands and communications. The new storytelling tools are expected to be available early next year, some for a modest fee. 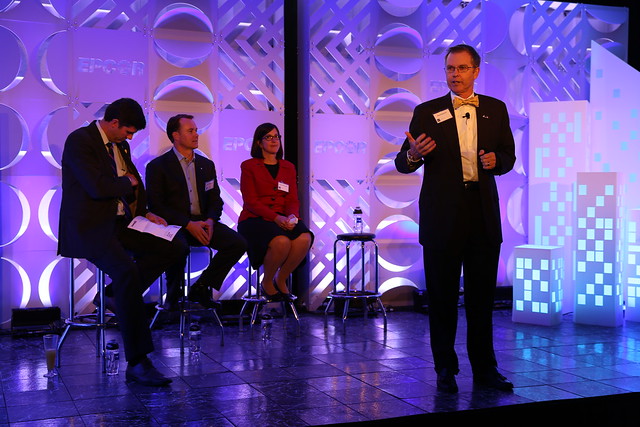 EEDC is also planning to run targeted ad campaigns in select cities with a goal of attracting students, young couples, and offices to Edmonton’s growing downtown. “We’ve got to fill up all these new buildings,” Brad joked.

After the speeches were done, guests were invited to head up to the 28th floor balcony for a tour of the many construction projects happening around the EPCOR Tower. Here are some photos from above: 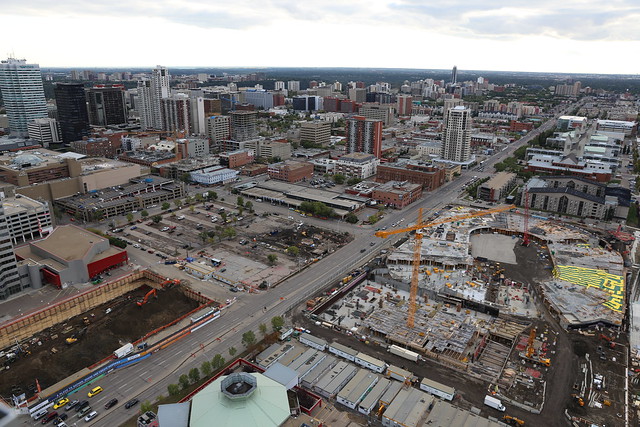 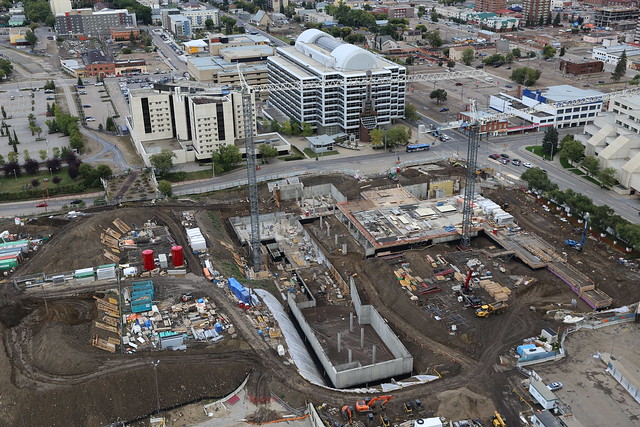 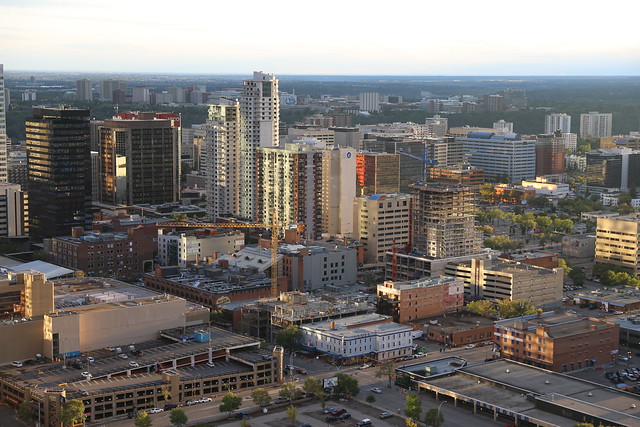 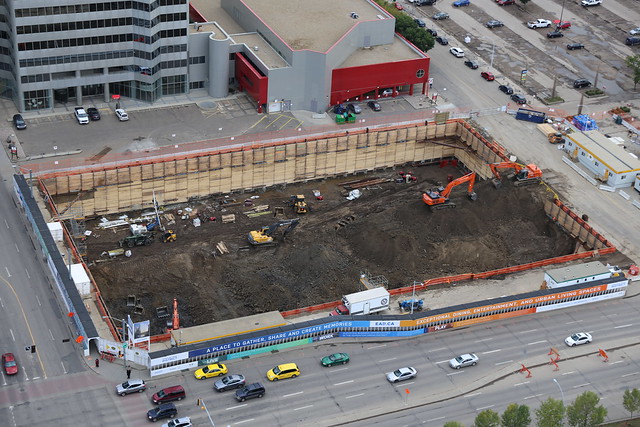 EAD Office Tower, which will be home to the City of Edmonton offices 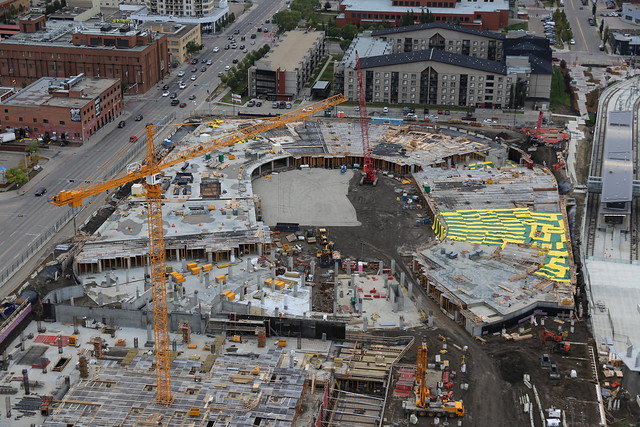 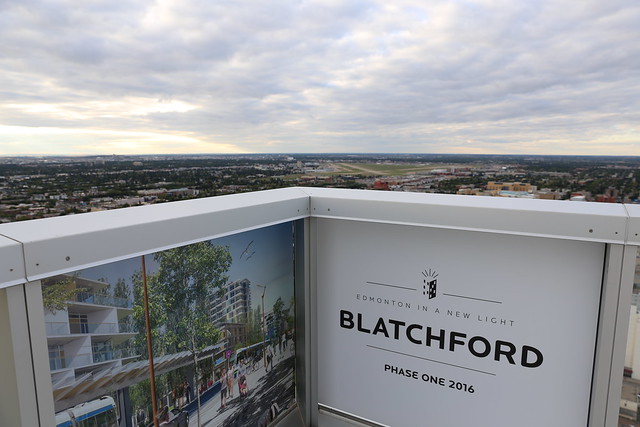 Blatchford in the distance

Tonight’s event was undoubtedly a cheerleading session. So might consider it a call-to-arms for the local business community, an opportunity to say ‘get on the train now before its too late’. But unfortunately this sales pitch lacked the all important ask. There was no mention of next steps, beyond the “speak proudly about Edmonton” message and the promise of digital assets to help tell our city’s story. It felt a little incomplete.

That said, this is absolutely an exciting time for Edmonton, and it’s great that our city’s leaders are willing to stand up and say so. Not with the empty, meaningless, and outlandish claims of the past – “Edmonton is the best city, in the best province, in the best country in the world!” – but with a much more Edmontonian approach. “Something big is happening here, we can feel it, and we’re going to start talking a bit more about it.” We’re becoming a little less humble, and that’s a good thing. 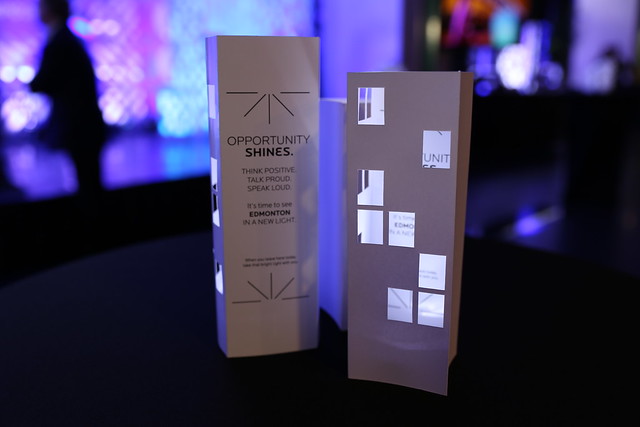 “The opportunity before us is to let the rest of the world in on the secret of why we’re all here,” Mayor Iveson said. It’s a message that those in the room should already know, but a little reinforcement doesn’t hurt. Hopefully tonight was the first in a series of nudges to get them to do something about it.

You can see more photos here.

4 thoughts on “Edmonton in a New Light”