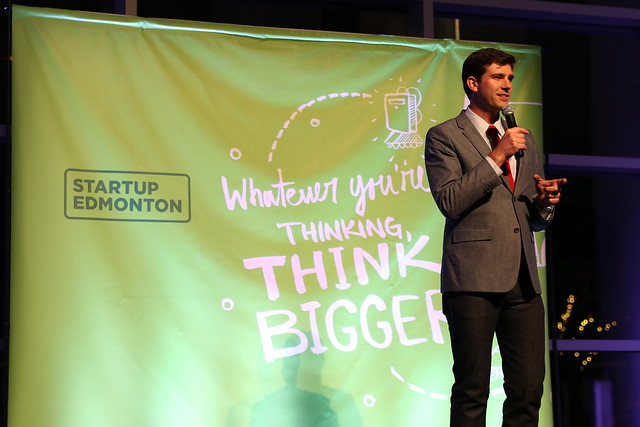 Mayor Iveson said that startups are another reason that Edmonton is getting noticed. He shared a thought that he heard recently, which is that your city isn’t on the map when someone opens a branch office there, it’s on the map when a company from your city opens a branch office somewhere else! Citing the recent news that 40% of all new jobs in Canada last year were generated in Edmonton, he told the presenting companies, “you’re going to create a lot more!”

This was one of the first public events at which EEDC acknowledged the acquisition of Startup Edmonton, a relationship highlighted by the recently relaunched Ignite Edmonton website. Chief Operating Officer Derek Hudson talked about Startup being part of the EEDC family, and highlighted the strengthening startup ecosystem in our city. 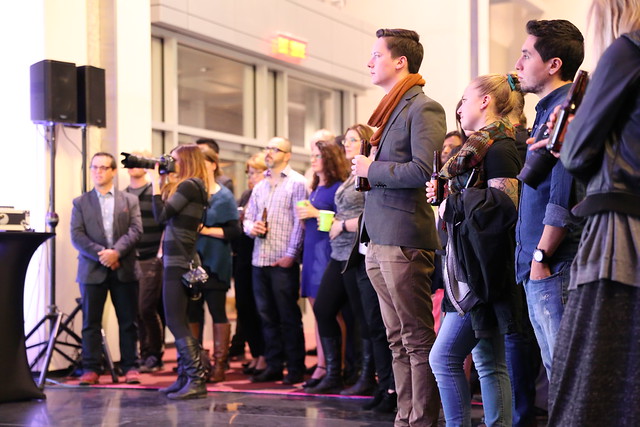 The ten presenting companies represented a range of industries and opportunities, including education, HR, oil & gas, and home automation. They were:

I spent some time checking out Alieo Games and their creative learning product called COW (Creative Online Writing). Alieo’s Kit Chen explained the idea to me, which is that kids don’t practice writing enough and through gamification, there’s an opportunity to change that. We co-wrote a short story that I very creatively called “the monkey by the river” to get sense of how the tool works. Kids can choose between a blank page or a prompt to help them start writing. As they write, they’re presented with bonus words that they are meant to incorporate. If they do, they earn Alieo dollars that they can spend on their avatar. When they’re done, the system presents some statistics of their writing to help them improve. 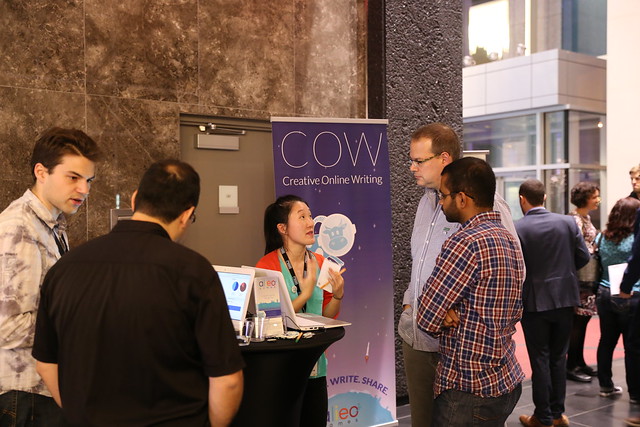 The plan is to try to get schools to adopt the tool, but they are also pricing it so that a single teacher could use it with his or her own class with discretionary funds. The three primary people behind the company are all PhD candidates at the University of Alberta, so they’re building this company alongside that already ambitious endeavour! Alieo Games is an eHUB Startup, and won first place in the TEC VenturePrize Student Competition last year. You can follow them on Twitter for updates.

I also spoke with Alexis Alchorn from Pogo CarShare. They were probably the most high profile of the participating companies, given they had just done a big reveal earlier in the day. Pogo is similar to other carsharing services like Car2Go, but it is created by Edmontonians for Edmontonians. Basically you use a mobile app or the website to see where the cars are currently parked, you go and pick one up using your membership card and PIN code, take your trip, then park the car somewhere within the zone when you’re done and it becomes available for another member to use. It really could enable two car households to drop down to one, or maybe even allow some people to go without a car altogether! 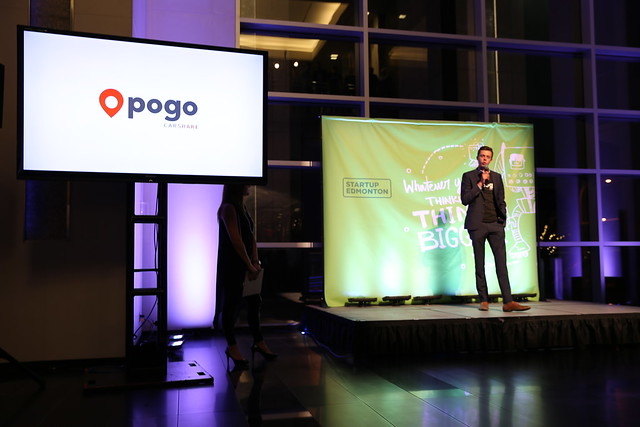 It costs just $35 to sign up, and after that you only pay for what you use – $0.47 per minute, $14.99 per hour, or $69.99 per day, and those costs are inclusive of gas, insurance, etc. You can even take the car out of the city for the weekend, and you pay $0.30 per km after 200km. Pogo is starting with just 20 vehicles but they hope to expand that number pretty quickly (down in Calgary, Car2Go has more than 500 vehicles). You probably have more questions, so fortunately they have an extensive FAQ page.

Given that Calgary is one of the fastest growing markets for Car2Go, I have long wondered why we didn’t have a carsharing service here in Edmonton. Now that Pogo is here, I hope to see them succeed. That said, it won’t be easy. They’ve done the heavy lifting of getting the right parking permit created in Edmonton, so in theory a competitor could more easily come to our city now. And one disadvantage as I see it is that if you’re a Car2Go member, you can use the service in any of the more than 30 locations they operate in. In practice I’m not sure how often that happens, but it’s a nice perk of being a member if you travel a lot, and at least for now, Pogo is Edmonton-only. Anyway, I wish them well!

I was intrigued by the name MASV and the “cloud communications” subtitle, so I spent a bit of time talking to co-founder Manson about the idea. Basically MASV is a tool to connect oil & gas companies with equipment rentals over the phone. The unique thing is that the automated phone system uses cloud-based voice recognition and proprietary filtering algorithms to connect renters with the right company. The problem they solve is that out in the field, a phone is often the only tool an oil & gas company can rely on, and they need to source equipment quickly. 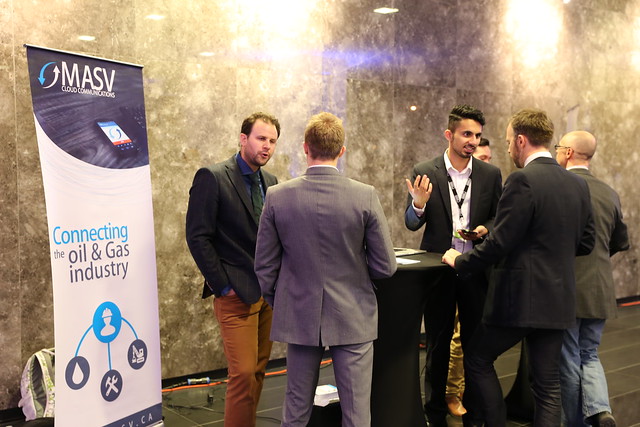 They’re using Node.js and Twilio to power the system. The business model is to have the rental companies pay a fee to be included in the directory and thus available to be connected with renters. MASV is also an eHUB Startup. They anticipate launching early next year.

I thought TwoFold’s Alison McMahon had a great elevator pitch, so I talked to her to learn more about the tools TwoFold has built to create better managers. She said “people usually quit their managers, not their jobs”. Alison is an HR consultant who has been working with companies to implement best practices and develop their managers, so she has lots of experience in the industry. After seeing the same problems again and again, the idea for TwoFold was born. 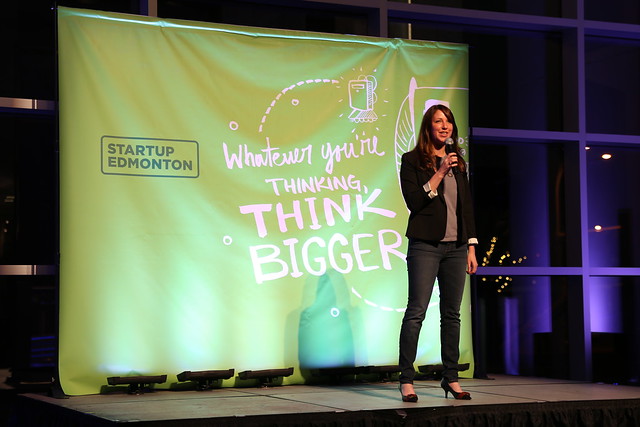 TwoFold provides managers with tools and processes they can follow without being HR experts. Employee surveys, coaching plans, orientation schedules, training history, and performance conversations are all examples. The interface looks pretty clean and is something I could have seen myself greatly benefiting from when I first became a manager. Pricing ranges from $25 per month for up to 15 employees, to $1,200 per month or more for more than 100 employees. 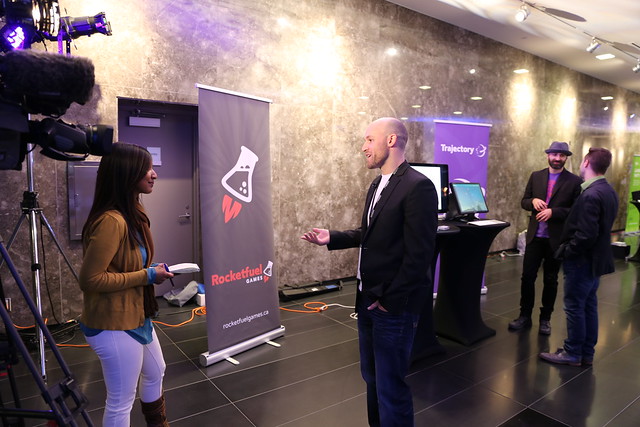 I didn’t spend as much time at the other companies, but all were interesting. I remember talking to Jason Suriano about his product Trajectory about three years ago, so it was neat to see that it has come to fruition and has customers already. TeachMe is also tackling education through gaming, but instead of writing they focus on math. Otto is a “system-in-a-box” that enables home automation, targeted at builders and renovators rather than end consumers. Instacoins enables you to buy Bitcoin with your bank account using Interac Online, simple as that. OMx is in the health space, and they have a dashboard that aims to give you better information about your body. And MADSOFT Games is focused on browser-based gaming.

The event took place at EPCOR Tower, in the expansive main floor space. As my friend Jeff remarked, the location nicely reflected the Startup Edmonton mantra that was visible on stage: “whatever you’re thinking, think bigger.” It was a very different feel than last year’s launch party, which took place at Startup Edmonton itself. Bigger, bolder, and more polished. 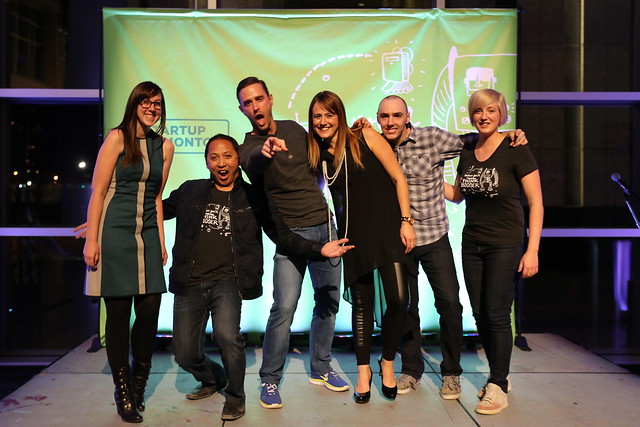 Launch Party took place on day four of Startup Week, which saw a number of entrepreneurship-oriented events take part all across the city. Kudos to Ken, Cam, and the entire Startup Edmonton crew on a great event and a successful week of celebrating startups in Edmonton!