Edmonton’s downtown is undergoing an incredible transformation right now. You can tell by looking up at the more than two dozen cranes located in and around downtown. You can tell by the dust and other construction debris that gets blown around by the wind. You can tell by the closed sidewalks and the detours that drivers face. And of course, you can tell by the energy and excitement that seems to be in the air whenever someone talks about what is happening downtown. This is no mere revitalization. To use the City of Edmonton’s words, it’s an “incredible renaissance coming to life” in the heart of our city.

This growth and momentum was the focus of a showcase that took place today on the empty and unfinished 16th floor of the EPCOR Tower. I’m not sure the organizers appreciated the irony of talking about new buildings and more development while we were standing in the middle of the last new office tower built downtown, one which remains only partially full. I know they wanted the view, but still. 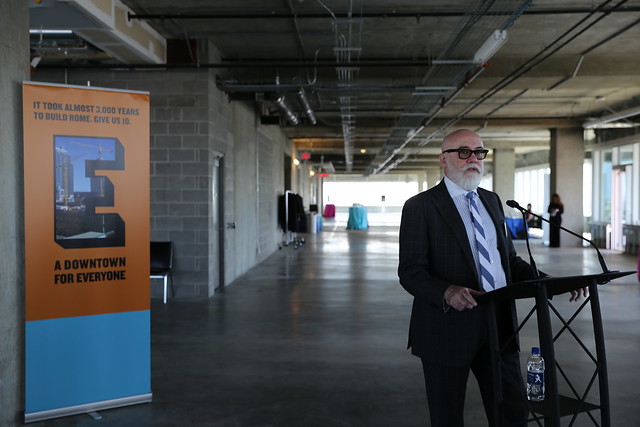 The statistics that Jim Taylor, Executive Director of the Downtown Business Association, and Scott McKeen, City Councillor for Ward 6, shared with us are impressive:

“The new downtown vibrancy and momentum is unmistakable,” said Jim Taylor. “There’s about $5 billion in new condos, office towers, hotels, and infrastructure under construction or planned for our downtown.” 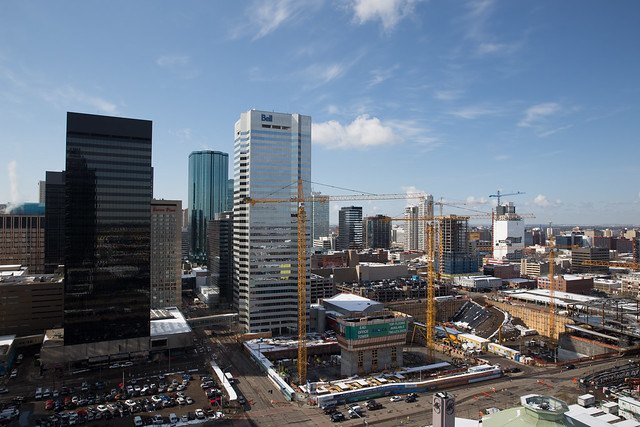 Projects under active construction include Rogers Place, the new Royal Alberta Museum, MacEwan Centre for Arts & Culture, NorQuest College Singhmar Centre, Kelly Ramsey, Fox Towers, The Ultima, 107 Street Annex, Hyatt Place in The Quarters, and of course all the buildings in the Edmonton Arena District, like the new Stantec tower. These projects are for residential, commercial, post-secondary, and other uses. It’s great to see such a varied mix.

The highlight of today’s event was the new visual icon that is meant to tie the various projects together. It’s a window in the shape of an “E” and it comes with lots and lots of color. 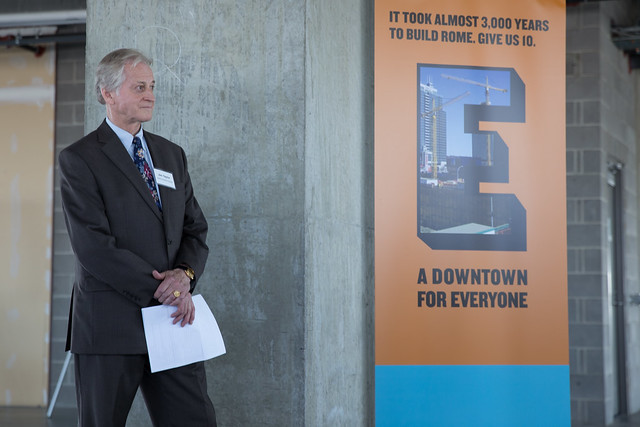 I’ll admit my first reaction to the design when I saw it a few weeks ago was negative. I still don’t get the “E”. It doesn’t say anything about downtown nor does it say anything about construction. I guess you can take it to mean that all of these projects are building a bigger and better Edmonton, but that feels like a bit of a stretch. The City seems indicate that the “E” is for everyone:

“Together, as a community, we are building a downtown for everyone, one that is economically strong, vibrant, global and inclusive. The visual style is bold, optimistic and confident. Everything our downtown, and Edmonton, truly embodies.”

That seems at odds with the approach Make Something Edmonton has taken. Instead of pretending that Edmonton is for everyone, MSE posits that it’s not, but that if you’re a maker, this is your city. Can downtown really be for everyone? I will say the design is growing on me though. 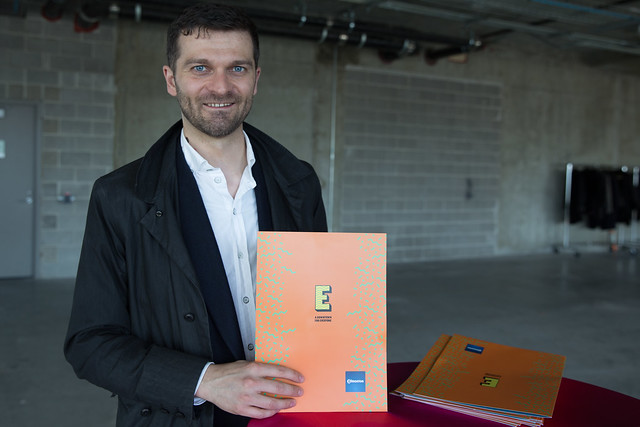 Berlin did the work and I had the opportunity to talk to Michael Brechtel about it. He’s a partner and is in charge of creative for the firm. He was quick to point out what the design is not. “It’s not intended to be a new brand for downtown,” he said. “It’s meant to reflect this specific time and this specific place.” He talked about the excitement that people are feeling about downtown and said his team is no different. “We’re excited and we feel a sense of ownership over downtown”, he said, pointing out that most of his colleagues live somewhere in the core and many walk to work.

There are three aspects of the design that I really like. I love the fact that it’s a window. You’ll see that reflected in print and online, and hopefully also around the construction sites, with literal windows into what’s going on behind the hoarding. If I had to pick my favorite construction hoarding from around Edmonton, it would be the new Royal Alberta Museum, partially because of the window (but also the fact that its colorful, well-lit, etc). A window into what’s coming is a pretty straightforward visual metaphor and it works.

Another thing I like about the design is that it’s colorful and bright, something that construction generally is not. “This should feel celebratory,” Michael told me. I’ve written about the short-term pain that comes with construction, but Michael is right – there’s a lot to celebrate. He noted that color helps to provide that feeling but is also accessible and inviting.

The third thing I like is that there’s at least an attempt to tie the various projects together. Obviously it wouldn’t make sense for the Oilers to get rid of their own branding, or for the Kelly Ramsey tower to ditch its excellent signage. But adding the “E” could help to better convey the message that there’s something bigger underway here. “We wanted a fun, common visual connector to raise interest and show our support for downtown,” said Councillor McKeen. 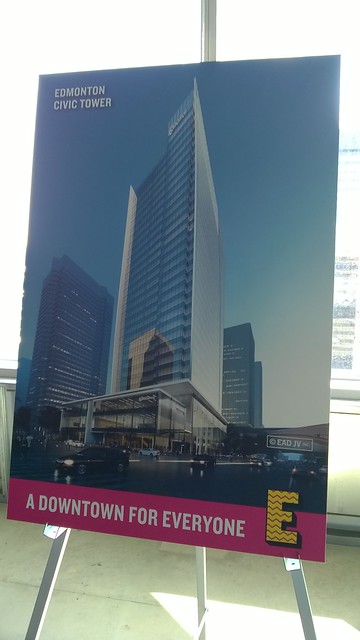 Of course, that only works if it is widely adopted. There were a couple of dozen representatives from the downtown projects in attendance today, so that’s a good sign. I spoke with Tim Shipton from the Edmonton Oilers and he assured me they are on board and are looking forward to integrating the “E” into their site along 104 Avenue. I hope others are planning to do the same.

It will be interesting to see what the City itself does with the “E” as well. So far they have run with the idea on the new downtown section of the website. They’ve added taglines like “put yourself in the picture”, “excitement worth waiting for”, and “who says cranes are an endangered species”. They communicate about what’s happening downtown more than anyone else, so including the “E” will be critical if it’s going to see any traction.

I would argue they need to do more than just marketing, however. The challenge is not selling Edmontonians on the projects, which I think more or less speak for themselves. The real issue is in keeping downtown functional and open while the construction is happening. The new Current Traffic Disruptions map is a good step in the right direction, but there’s so much more that could be done. Without question all the business and community partners have a role to play, but the City is in the best position to provide leadership here. 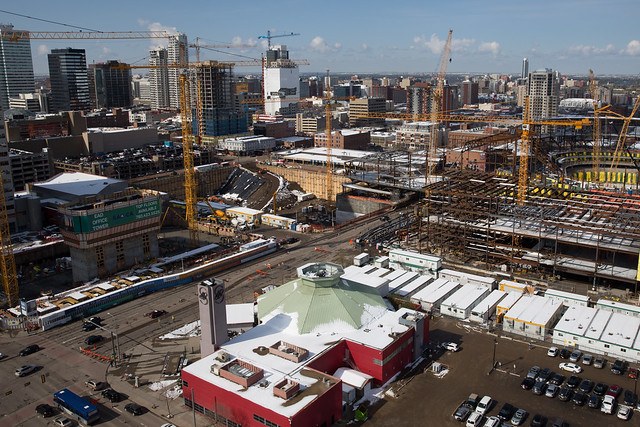 Today’s gathering reminded me a little of last year’s Edmonton in a New Light event. The focus was a little broader that time, but the message was the same. “Something big is happening,” and we need to tie it all together to help share the story. With luck, the colorful “E” window will help to do just that.