Edmonton’s 29th DemoCamp took place tonight at the Centennial Centre for Interdisciplinary Sciences (CCIS) on the University of Alberta campus. I wasn’t able to make it unfortunately, but I did follow along with each of the demos via Twitter (thanks to Karen Unland). In the spirit of continuing to document the startup scene in Edmonton, I wanted to do a quick write-up. You can read my recap of our last DemoCamp here. 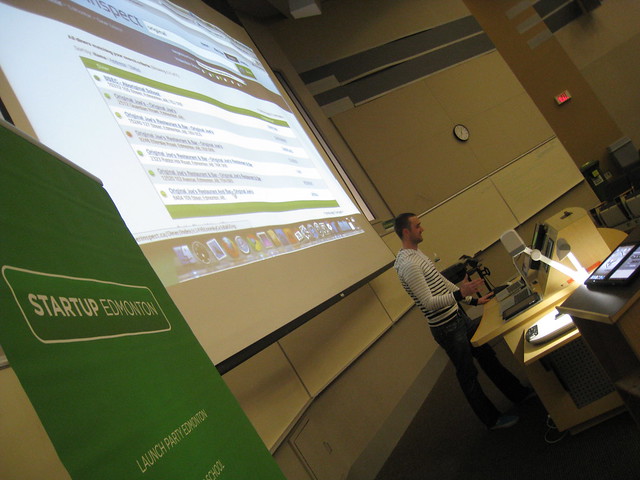 “DemoCamp brings together developers, creatives, entrepreneurs and investors to share what they’ve been working on and to find others in the community interested in similar topics. For presenters, it’s a great way to get feedback on what you’re building from peers and the community, all in an informal setting. The rules for DemoCamp are simple: 7 minutes to demo real, working products, followed by a few minutes for questions, and no slides allowed.”

Home Tribe debuted back in October at Launch Party Edmonton 6. It’s a new way to explore real estate. They have a feature called Home Tribe Match which Karen described as “sort of like a dating site for you and your future home”. I saw the demo back at Launch Party and found it to be a clever way to sort through MLS data. Instead of just looking by location, you fill out a questionnaire of preferences and Home Tribe uses MLS and other datasets to narrow down to the best matches for you.

Shelfie is a project of some Jobber employees. It’s a “small library management” tool. You can scan books to add them, you can rent books with a single-click, and you can keep track of what you’ve read. Sounds a little like GoodReads but for libraries. The application won fourth place in the 2015 Rails Rumble hackathon, which is a distributed programming competition with participants from all over the world. Great to see an Edmonton team take part and do so well!

Run-WithIT strikes me as one of those things you have to see to get, but I’ll try. The website says they “create a continuous simulation of your future field conditions complete with real data and millions of metrics so you can have IT all figured out before release.” I gather it is a tool for planning through simulations, and those simulations are really about the performance and scalability of web applications. Karen wrote: “The field is the greatest teacher, so Run WithIT simulates the field so IT pros can learn.”

FitCoins sounds like a wonderful idea, though there’s nothing on the website to explore yet. Just an explanation that “Fitcoins are an activity based point system that allows kids to earn screen time.” It’s a smart way to tackle the challenge of getting kids to be physically active when all they want is to message their friends or whatever it is kids do these days on their devices. Sounds like FitCoins is still at a very early stage, as Karen noted: “Really neat to see a demo at the stage that FitCoins is at. It’s Arduinos in a box, but it works.”

The final demo was from CareNetwork, which also presented at Launch Party 6. It’s an app and service that “helps acute-care medical teams stay in sync without breaching privacy,” Karen wrote. It has a very clean and modern design with features like a newsfeed on each patient. I talked with the team at Launch Party and learned they have had difficulties piloting in Canada, which is why they’re focusing on the US to start. There’s huge potential for a service like this, so I hope they find success abroad and here at home.

Karen tells me every demo tonight was impressive but highlighted how interesting FitCoins was. I think there’s a certain appeal to the straight-from-the-garage projects, which is not meant to be a negative comment. But everyone can rally behind that “yay it works!” feeling that you get from seeing something early and rough and full of opportunity.

Want to work with a local startup? Jobber, Home Tribe, Granify, Drivewyze, and Invidi Technologies are all hiring, so get in touch with them!

See you at DemoCamp Edmonton 30! (hopefully)