With just 11 days to go until Election Day in the Ward 12 By-Election, let’s take a look at what has happened so far in the race to replace Amarjeet Sohi.

The City of Edmonton held advance voting this week from Monday through Thursday at the Meadows Community Recreation Centre. Election officials told me today that more than 3,000 voters have cast a ballot. That’s a little less than anticipated, but is nevertheless a good start considering a total of 17,815 votes were counted in the ward in the 2013 Municipal Election.

The weather today didn’t help with advance turnout, and neither did the “overwhelming number of campaign supporters” present at the Rec Centre that may have intimidated voters earlier in the week. Election officials took action and setup a barrier to help deal with the situation.

Much has been made in this by-election about the number of signs that are appearing around the ward. Signs are not supposed to be placed close to intersections, bus stops, schools, or polling stations, but they have been. Election officials had to take action because so many signs had been setup close to the advance voting location, and drivers and others have complained the large number of signs are distracting. Campaigns can face a $250 fine for poorly placed signs. 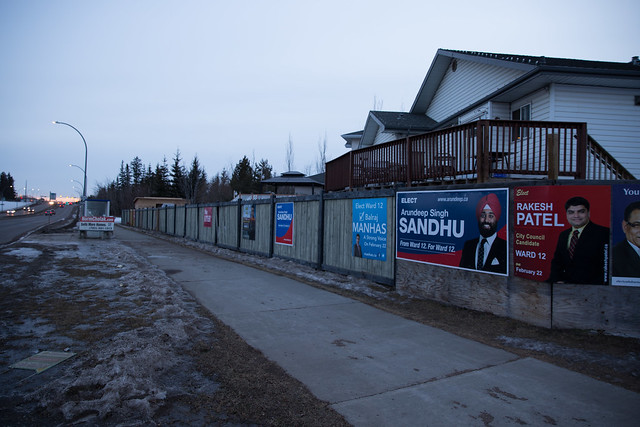 I was in the ward on Sunday, and observed dozens and dozens of signs that had fallen down or otherwise been damaged. The intersection at 34 Street and 35A Avenue did feature quite a lot of signs along the fences. But overall I saw fewer signs than I expected, based on the online chatter I was seeing about them. Campaigns have 72 hours after the election to remove all of their signs and other ads.

Most of the discussion about the by-election thus far has centered on the large number of candidates running. A total of 32 will be listed on the ballot, and that makes it difficult for a candidate to “break from the pack and distinguish themselves” let alone for voters to get to know all of the candidates in order to make an informed decision. The Journal has a pretty good introduction to each candidate, and while that may help to narrow down the field, it’s not enough.

So far, just one candidate has dropped out of the race. Shani Ahmad announced he is supporting Irfan Chaudhry instead, but because he dropped out after the nomination grace period ended, Ahmad will still appear on the official ballot.

I did not attend the forum last week at the Mill Woods Seniors Activity Centre, but it must have been quite the sight to behold. “The ratio of observers to candidates at Tuesday night’s Ward 12 Forum…was around five to one, and that’s with only 21 of the 32 candidates in attendance,” wrote Claire Theobald. Understandably, many people left early or otherwise complained about the unmanageable number of candidates.

Vote for a woman

One way that voters may reduce the number of choices is by focusing only on female candidates. There are six running, a ratio that isn’t too dissimilar to what we see on Council currently where Bev Esslinger is the only woman. Danisha Bhaloo, Nav Kaur, Nicole Szymanowka, Laura Thibert, Preet Toor, and Jeri Stevens are your female candidates.

Getting more women elected has been the focus of Equal Voice as well. Their goal is to have “half of Edmonton City Council and School Board candidates to be women” in the 2017 election and they have launched yegparity.ca in support of that effort. They recognize that if the by-election is any indication, things are not off to a great start. “Out of the current 31 candidates, only six are women…meaning only five percent of candidates,” they wrote (as a commenter points out below, that’s actually 19% of candidates). “That’s nowhere near close enough to meet our goal of 50 percent gender parity in 2017.”

Woman’s Initiative Edmonton also highlighted this issue with a feature on Nisha Patel, a young woman who lives in Ward 12. “The fact that there’s only a handful of women running amongst all these people who put their foot forward means that I want to support a progressive woman, because I think it’s about time,” she said.

Do you think partisan politics should be kept out of the civic realm? That’s the issue everyone was talking about last week as Environment Minister Shannon Phillips took part in a fundraiser for candidate Nav Kaur. “This seems to be quite over the top,” is what Councillor Oshry told CBC Edmonton. Most of the comments I saw about the issue were overwhelmingly against the event and the NDP’s involvement. 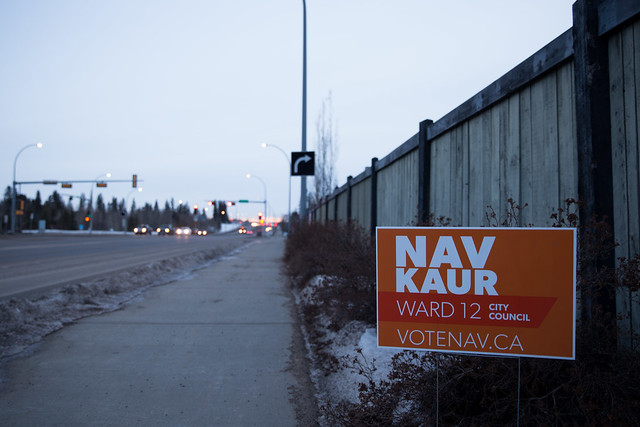 On the other hand, Dave persuasively argues that it’s a “popular and misinformed myth that ‘there is no partisan politics in municipal elections.'” He notes that it “is natural for politically engaged people to be involved in elections for different levels of government” and that many current and past Councillors have had affiliations in provincial and federal elections, or endorsements from provincial or federal politicians.

Still, it’s hard to look at Nav Kaur’s incredibly orange website and list of key supporters and not immediately think the NDP is running for Council.

Where do they live?

For some voters, candidates simply must live in the ward to be considered. I generally feel that way too, but for me it’s a preference, not a hard and fast rule. And clearly it hasn’t hurt campaigns in the past, as both Councillor Nickel and Councillor Anderson do not live in the wards they represent, for example.

It turns out that about a third of the candidates running in this by-election do not live within the ward boundaries, according to an informal poll conducted by the Journal. With such a large number of candidates running, I don’t think this is that surprising. I also don’t think it’s such a problem. What’s more important than where a candidate lives is whether or not they can do the work necessary to represent their constituents.

There’s an awful lot of variation within Ward 12 as it includes new neighbourhoods like Summerside where median household income is $110,374 (average is $127,128) and also older ones like Minchau where the median household income is $81,139 (average is $89,686). Living in one part of the ward doesn’t mean that candidate will understand all of the challenges facing other parts of the ward any better than an outsider might.

Run-ins with the law

According to CBC Edmonton, six of the candidates running have had issues with the law. “While many of the incidents were minor, one candidate was convicted of assault, another was the subject of two court-ordered peace bonds and a third pleaded guilty to more than a dozen public health charges,” wrote Janice Johnston.

A second article by CBC Edmonton says that candidate Yash Pal Sharma is being sued “over his involvement in an alleged scheme to smear the reputation of a local Punjabi-language journalist.” He denied any involvement.

What do they stand for?

Considering we’re less than two weeks from Election Day, there hasn’t been much discussion about ideas or platforms. Candidate Nav Kaur did not like the fact that Council moved forward on the Uber decision without a Ward 12 Councillor, but clearly she’s not just running on the Uber issue. It’s probably a safer bet to suggest that’s why Balraj Manhas is running, but his website doesn’t include any platform information.

The other item I’ve heard/seen many candidates talk about is the Valley Line LRT and ensuring we get good value for money on that project. The Valley Line isn’t going to enter Ward 12 as it terminates at Mill Woods Town Centre in Ward 11, but it will have a big impact on transportation to and from the ward, of course. Still, it’s pretty easy for a candidate to say “we need to do better than the Metro Line” and just leave it at that. 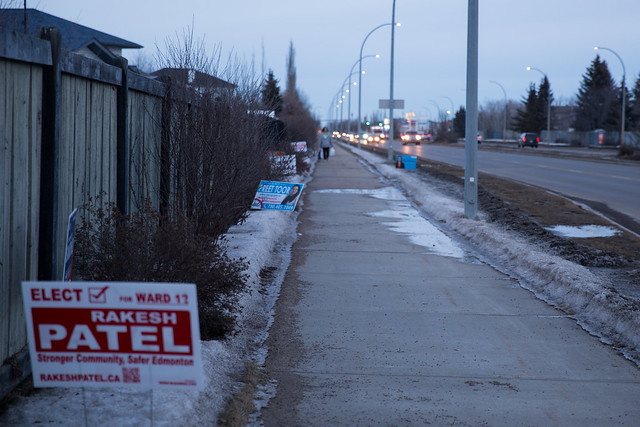 But maybe there’s still time for more substantial discussions with candidates to take place. Edmonton’s NextGen has a set of questions they are asking candidates this week, I’ve sent a survey to candidates that I will share the results of next week, and I’m sure others are gathering input as well.

If you’re a voter in Ward 12, there’s not much time to get to know the candidates hoping to earn your vote. If you’re a first time voter, Edmonton’s NextGen has a good roundup of important things to know. Good luck to all!