We currently divert more than 52% of our waste from landfill here in Edmonton and the goal is to increase that to over 90%. That’s going to take multiple approaches and a lot of hard work. Recycling is key, so it’s great that more than 90% of Edmontonians currently use the blue bag recycling program, according to the City. But sometimes we put the wrong things in the bag! That’s where the City’s new app called WasteWise comes in. 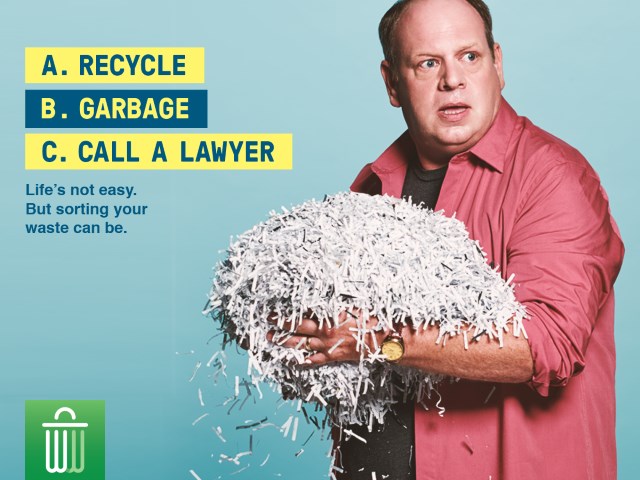 A launch event with a friendly waste sorting competition was held on October 26 at City Hall and I was excited to participate along with Councillor Andrew Knack, former Oiler Andrew Ference, and the kids from City Hall School. We each received a few bean bags with items on them and we had to determine whether that item should be recycled, taken to an eco station, or put in the garbage. We could guess, use the poster, use the app, or ask the audience for help. We got one point for getting that right, plus another point for tossing the bean bag through the right hole. It was more challenging than it sounds! 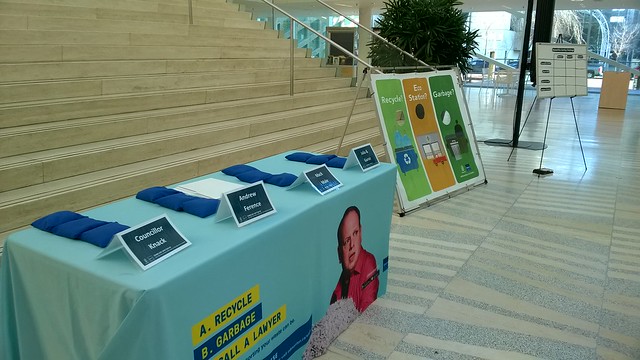 You can see some video highlights from the event at the Journal. Somehow I managed to win the competition, even though I made a big mistake! 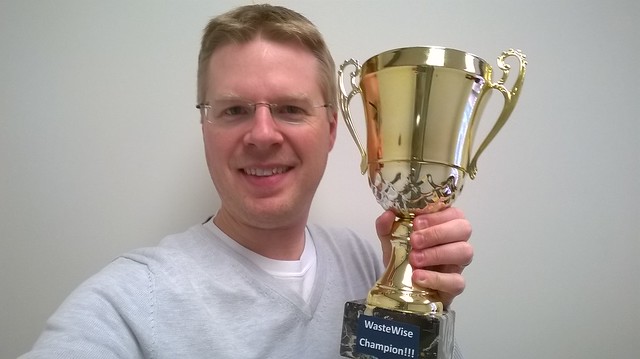 My mistake was apparently a common one among Edmontonians. One of the items I got was shredded paper, and I thought “aha! paper! surely that’s recycle!” Needless to say I got no points for that incorrect guess. Unlike sheets of paper or newspapers, shredded paper should be put into the garbage because “it clogs machinery at the recycling sorting plant, causing damage and plant shutdowns.” Because it is already shredded, it composts well. So, it was an educational event!

Some other commonly mistaken items include pizza boxes (they go in the recycle, even if a bit greasy), compact discs (CDs go in the garbage, or to the Reuse Centre), and plastic shopping bags (they get recycled too). If it has a cord, it should generally be taken to the Eco Station. You can challenge yourself by playing the WasteWise game What Goes Where?

The new WasteWise app is powered by a service called ReCollect. Other municipalities in Canada have gone with the same system, including Vancouver, Victoria, and Ottawa. The City was happy to point out that using an off-the-shelf tool was cheaper than building a brand new app, not to mention they get to take advantage of having the kinks largely worked out by others. In addition to being able to quickly look up whether an item should go in the garbage, recycle, or to the Eco Station, you can also get reminders about your waste collection day.

As of this week, the app has been downloaded more than 6,000 times and users have searched more than 67,000 times! The most commonly searched items are pizza boxes, styrofoam containers, and plastic containers. A little over half of app users have signed up to receive reminders.

You can download the Edmonton WasteWise app for iOS or Android, or you can access it via the web widget.

In addition to making the new app available, the City has released all of the data that powers it via the open data catalogue! In particular you can access:

These datasets are all fairly new so we’ll have to see how developers take advantage of all that data. I think an augmented reality app would be cool – imagine just pointing your mobile phone’s camera at an item to have it recognize the item and tell you where it should go. Would make all those de-cluttering challenges that seem so popular lately a little more interesting!

You can learn more about the City’s waste management programs & services here.