I really meant to post this recap back in November, but for a variety of reasons, I never got around to it. I did take notes as usual though, so better late than never? Since then, DemoCamp Edmonton 39 took place on January 31. I missed that one, but for a good reason!

Edmonton’s 38th DemoCamp took place at the Centennial Centre for Interdisciplinary Sciences (CCIS) on the University of Alberta campus on Tuesday, November 21. Here is my recap of DemoCamp Edmonton 37) which took place in October. 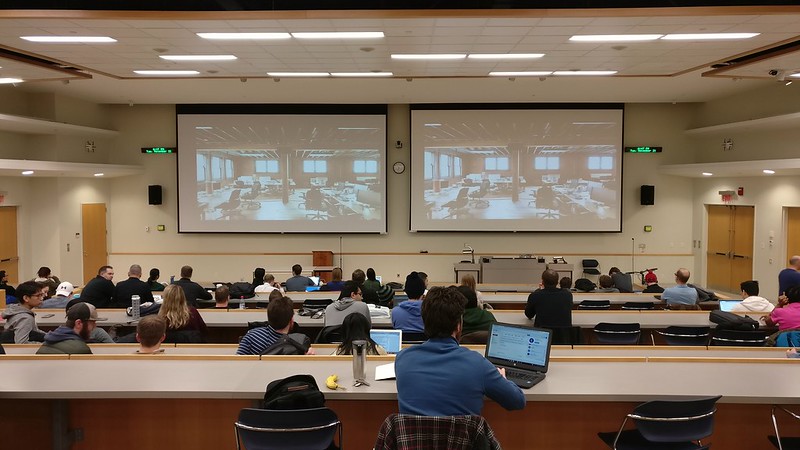 I always love seeing what local entrepreneurs and developers have been working on! It was great to see some demos from the Student Hackathon, and some hardware-focused demos too.

The first team’s project used three.js (which is a JavaScript 3D library) and the top 100 gifs from Gfycat to do some cool 3D rendering on the web. “To make a long story short, we essentially learned javascript on the fly, and made a cool 3D gallery app that gets GIFS from Gfycat, and displays them in 3 dank modes.” Not too bad for their first ever hackathon!

The second team showed us an “Internet of Things” coffee sleeve that sends you a tweet if your coffee is too hot. It does this by monitoring the inside and outside temperature of the cup and using IFTTT as a backend. Unfortunately, that means there are a bunch of live wires inside the cup! They called it “pretty sparky” coffee. They were inspired by the “useless shit that nobody needs” hackathon and finished their project in about 9 hours.

The third team showed us a real-time logging and data management application that was built for the student electric vehicle projects. Built using Django, the app sends 1 packet of data every half a second to provide information for the dashboard. They said teams would be using the app in upcoming competitions in California and London.

The final student hackathon demo was the most colorful: “an Arduino-powered, speed-detecting light show on your bike.” There’s a small magnet on the back wheel to track the number of revolutions per second to cycle and color the LEDs according to the frequency of revolution. Kevin told us it took about 300 lines of code and can handle up to 400 revolutions per second, which works out to 288 km/h. Cool stuff.

Next up was Rui who showed us a security app called Umwelt that he has been working on. The idea is that when you get up from your desktop, you generally take your phone with you, so why not detect that to lock the desktop? The app does this by measuring the strength of your Bluetooth connection. Too weak and it locks the machine. As you come back it gets stronger, and the desktop is unlocked as a result. It’s a cool idea, though not perfect, as Bluetooth can be affected by a large number of factors, not just distance. Rui said that Wi-Fi Direct would be better, but many phones don’t support it.

Our sixth demo was from Deo who showed us an AI-based transcription service he has been working on. The app uses IBM’s Watson services behind the scenes, and at the time worked on the web only though a mobile app was in the works. In addition to transcribing audio and providing a nifty editor, LiivLabs can take the transcribed text and summarize it into some key bullet points. It can also detect and recognize different voices to label them differently. Oh and by the way, Deo is still a high school student!

The next demo was from John who showed us Run for Stuff, an app that lets you earn rewards as you walk, run, job, or take the stairs. You can then redeem those rewards for active wear and other items from partners like HelloFresh. For every 100 steps you take, you earn 1 activity point on Run for Stuff. The app launched on iOS in August and uses the Apple Health SDK and built-in pedometer to track your activity. Since DemoCamp, the app has also launched on Android.

Our final demo was of Elev8 from Visio Media, an advertising platform currently active on screens in elevators throughout the city (including in the building I live in). The platform uses computer vision to do anonymous facial recognition for demographic analysis to serve you targeted ads. Basically, it can make an educated guess at your age, gender, and attention, and can show you ads that target that information. Other factors like the time or weather can also influence the ads you’ll see. Visio isn’t currently doing any eye-tracking, but they can detect if someone is facing the screen or not. They promised that no personal information is stored, just aggregated metrics to provide advertisers with some measurability. Visio Media was one of the presenting companies at Launch Party 4 back in November 2013.

There were the usual startup announcements sprinkled throughout the evening, like who’s hiring. Be sure to check out the job board for opportunities.

See you at DemoCamp Edmonton 40!