Edmonton’s 37th DemoCamp took place at the Centennial Centre for Interdisciplinary Sciences (CCIS) on the University of Alberta campus last Wednesday. Here is my recap of DemoCamp Edmonton 36 which took place in May. 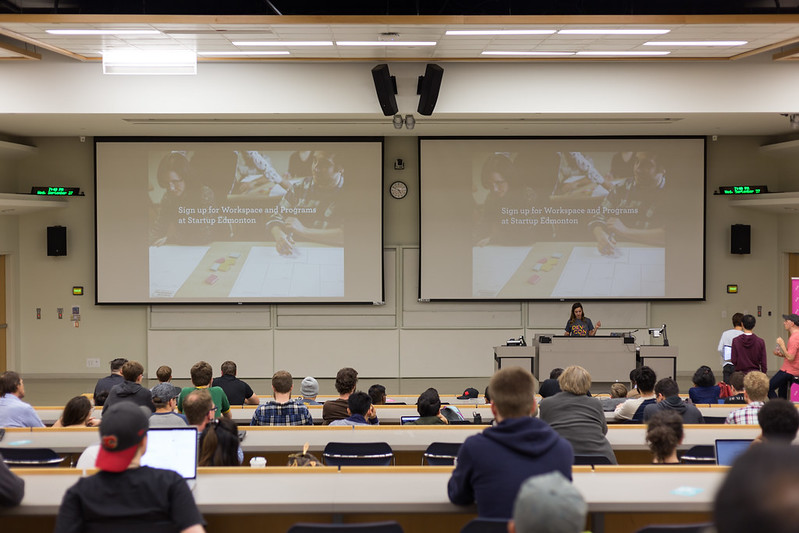 I always love seeing what local entrepreneurs and developers have been working on!

First up was WedImage which is “an online wedding vendor marketplace with an emphasis on wedding photographers.” It started as a hobby site in 2010 but now features more than 1,600 different photographers. WedImage isn’t just about photographers though as they also hope to connect brides with other vendors they’ll need for their wedding, things like jewelry, food, decorations, etc. Key to WedImage is the use of real photos and not stock photos, so that brides know what they can expect.

The Low Road is a graphic adventure game from XGen Studios set in the 1970s. You play as an intern at a corporate espionage agency. You’re kind of like James Bond, or at least you want to be, but you quickly realize that the world isn’t quite as you pictured it. Your goal is to get out into the field as a spy by lying, stealing, manipulating, and blackmailing your co-workers. The game has been in development for 3 years and launched this summer on Steam for Mac and PC. They’re also planning a Linux version, and are considering the iPad as well. The game features over 32,000 lines of dialogue written by Leif Oleson-Cormack and just won a Digital Alberta award for “Best Game Experience”!

Our third demo was of You Can Benefit, a website that aims to reduce the barriers to accessing benefit applications. The project is “a partnership between the City of Edmonton, E4C, and volunteers from BetaCityYEG.” It’s still under construction, but one of the key features is that administrators from E4C can update the data without having to do any coding. The site is focused on Edmonton and Alberta right now.

Foosify was supposed to be our fourth demo, but the demo gods didn’t want to play ball. Developer Sheldon told us about it briefly, saying that initially he just wanted to parody startup culture so he threw up a landing page. He got so much interest though that he decided to go ahead and build it anyway! Foosify promises to “up your office’s foosball game” and essentially is a way to track matches. Sheldon hopes to add tournaments in the future.

Our fifth demo of the night was Vaniila Moments, which is a way to capture and share live events. The idea is to provide a better user experience than alternatives like Twitter Search. You can cover events live (called a Live Moment) and then readers/viewers can replay the archive later (called a Moment). You can also collaborate with others to produce a Moment together. I love dogfooding at DemoCamp – the team used Moments to cover DemoCamp all evening long!

The final demo of the evening was Cognilit, which is a “fully immersive brain training program” that uses your mobile device and a VR system like Google Cardboard. It promises to “improve your attention, cognitive processing speed, peripheral awareness, working memory and perception of complex movement.” Simba showed us a virtual world with different colored balls that we had to follow and then identify after they stopped moving. Imagine those “which box is the pizza in” or “which cup is the ball under” games that you see on the big screen at hockey arenas. I feel like the demo just scratched the surface, but it was still pretty cool.

All the presenters did a great job, even when things didn’t go as planned! There were the usual startup announcements sprinkled throughout the evening, like who’s hiring. Be sure to check out the job board for opportunities.

See you at DemoCamp Edmonton 38!