Edmonton’s 40th DemoCamp took place at the Centennial Centre for Interdisciplinary Sciences (CCIS) on the University of Alberta campus on Wednesday, March 14. The event marked 10 years since Edmonton’s first DemoCamp which took place back on March 26, 2008. Here’s what I wrote in my recap of that event:

I counted about sixty people at one point, with some standing along the back walls.
It’s great to see the community growing like this in Edmonton, and I have no doubt that the next DemoCamp will be even better!

To celebrate ten years of DemoCamp, the 40th edition included some demos from past years, for a sort of “where are they now”-style demo. There was also a nice round of applause for Cam Linke, who started DemoCamp here in Edmonton despite others saying it would never succeed. 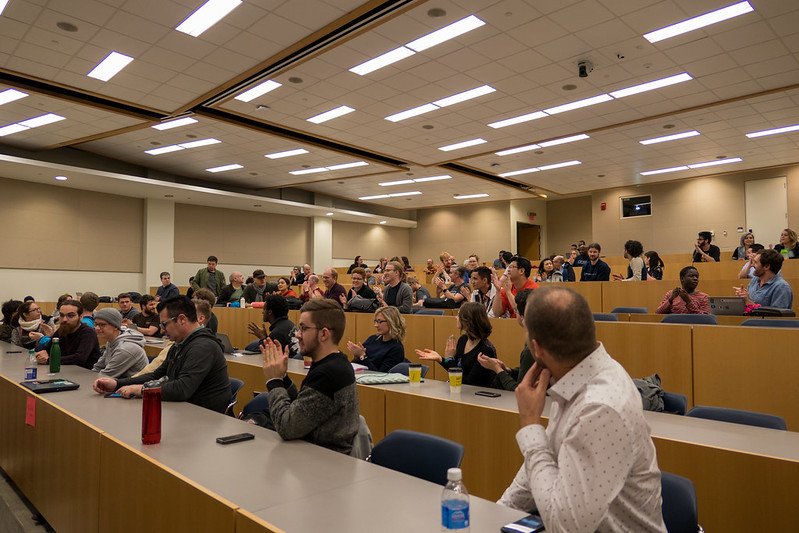 In order of appearance, the demos were:

BritBot, a follow-up to Kory’s previous demo on the improv robot at DemoCamp Edmonton 34, is a new project in conjunction with an art project from the UK focused on Brexit and what it means to be British. With a microphone attached, you fire up BritBot to answer a series of questions. It went a bit crazy during the demo, but we got the idea. The bot tracks user engagement, what the user is saying, and both how complex the answers are and how well they match the questions. To ask new questions, the bot is simultaneously searching a series of neural networks. There are 34 topics and 900 questions. BitBot tracks offensive speech and hate speech, “because people start insulting these things relentlessly,” Kory said. Cool stuff!

Gotta Style is a mobile-first CRM for the hair salon industry. They’re trying to tackle the problem of under-utilization, where the salon is full of empty chairs. Customers with the app can browse styles, see available salons that are on the platform, and can choose a stylist and book an appointment. As a stylist, they can accept and manage bookings, take photos of the haircut so both have a “hair fashion file” of the styles you’ve got, plus add notes for future bookings. They noted they could expand in the future to nail salons, etc. The app also supports social media publishing, if the client approves it, which is something I’ve noticed is pretty popular on Instagram.

Drivewyze, which first demoed at DemoCamp Edmonton 28, does a pre-screening mobile app for long-haul trucking, similar to Nexus. They describe themselves as “the nation’s largest weigh station bypass service” (meaning the United States, they’re active in all but 5 of them). There are about 200,000 vehicles on the road right now that the system handles. They moved their backend to Amazon AWS last year, so their demo showed off the behind-the-scenes and all of the intelligence and automation they’ve built around it. Sean noted they have gone from “hope and pray” to “know and be proactive” over the last two years with all the changes. It was pretty cool to see!

Yardly offers an online service for lawn care and snow removal services. There’s an admin app, a provider app, and a customer app. Yardly can be used for one-time service, or also longer-term or recurring service. They showed off the MVP which looked pretty polished. The service enforces a bit of a workflow – for instance, providers need to take before & after photos with the app. They don’t have any plans to do “inside the house” services, they are focused on outside the house, and want to make sure they get that right. 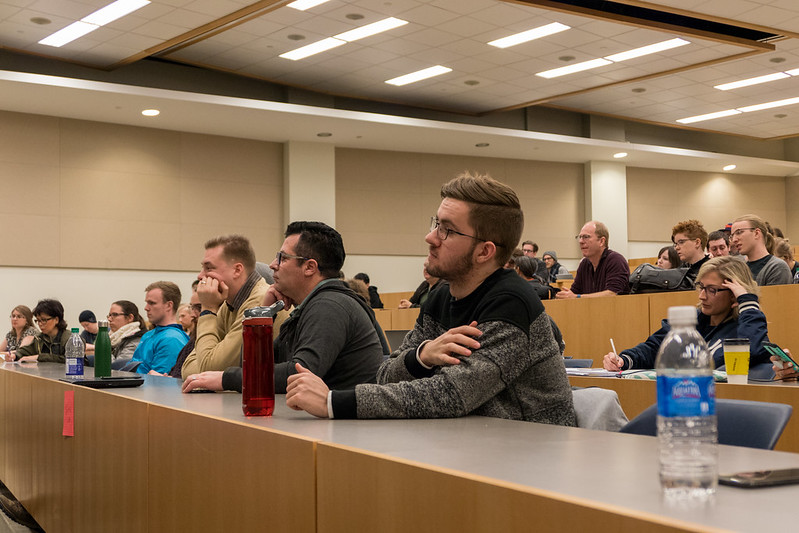 Elsi was up next. Jerry showed off his approach to make managing passwords easier. No sensitive information is stored on your phone, instead there’s a little card-like device that you use that communicates with your phone or other computers via NFC. It uses a patent pending system that “relies on user intention”. Think of it like a security badge that you’d use to access different parts of a building. The purpose of the card is really the fear of having something like your phone with all your passwords connected to the Internet, Bluetooth, etc. I can see the appeal for a subset of people, and it did look really easy-to-use.

ScopeAR, which first demoed at DemoCamp Edmonton 34, was back to show off WorkLink, a tool for building step-by-step instructions or training using the company’s augmented reality platform. The result can then be published and consumed on a device like an iPad (they support iOS, Android, and Windows 10). You can of course use a head-mounted display like a HoloLens, but it also works on a tablet (just not as well). Turning a paper manual into a digital manual can take something like 3 minutes per step, depending on how fancy you want to get. They’re focused on B2B right now and have some big customers, like Caterpillar and Boeing!

Frettable was up next, to show off automatic music transcription. Greg started working on it at a hack day at Startup Edmonton! He promised “one minute of talk, six minutes of rock” and performed a Metallica solo for the crowd! The music is recorded locally and the transcription happens up in the cloud. In addition to a mobile app, there’s a web interface. Once the audio has been processed, you can see a MIDI of what the AI recognized and then download the automatically generated sheet music. Pretty darn cool. Right now it has to be a single instrument at a time, and you can also do vocals.

SAM, which first demoed back at DemoCamp Edmonton 22, was our final demo of the evening. Sean showed off the new Alerts product, which “turns unstructured social media chatter into actionable insight and awareness.” The service, which launched about eight months ago, processes Twitter information exclusively, to the tune of about 10 million tweets per day! There’s automatic classification but moderators can also adjust the classification of tweets. All of that data allows the models to be regenerated every night making the system even better. They’re actively working on new features too, like the ability to extract the number of people hurt in an event. Alerts is English-only for the moment, and counts the New York Times as a customer. The pitch is that Alerts is an early detection system, so news organizations can still apply their due diligence over top.

There were a few demo gremlins, but for the most part, everything went smoothly! 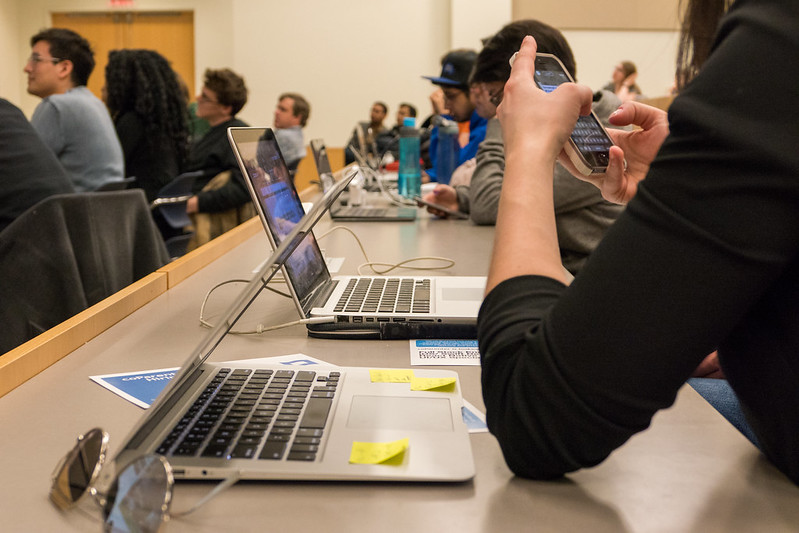 It was great to see so many students in attendance! If you’re a student, find out what Startup Edmonton has to offer.

If you’re looking to grow your own business, check out the new Talent Membership. “More than a connection to students, the Talent Membership gives you access to all of the activations we produce to help you recruit and retain our city’s brightest to your teams, from junior developers to mid-career marketing leads.”

See you at DemoCamp Edmonton 41!

One thought on “Recap: DemoCamp Edmonton 40”