Yesterday afternoon I had the opportunity to help judge the City of Edmonton’s HealthHack Competition. Connected to Edmonton’s Smart Cities Challenge, the competition invited citizens to propose innovative approaches to improve the four health indicators of mental health, physical health, social health, and economic health. Nearly 40 proposals were submitted, and a previous round of judging (that I was not involved in) narrowed that down to the top 5, who were invited to spend a month working on a prototype which they demoed at the event yesterday. 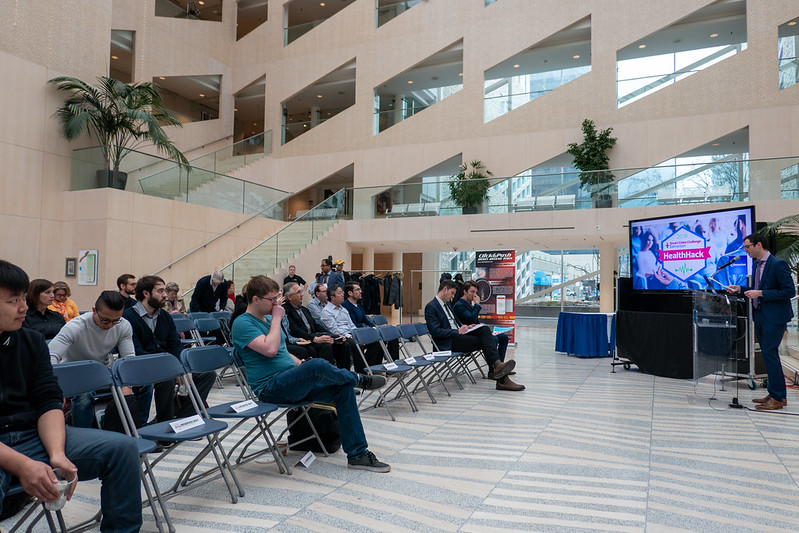 These were the top 5 teams who presented a prototype:

“The City of Edmonton started the work on reducing social isolation with our buddy bench program, now I propose to take that simple act of saying “hello” online as well and make it easier and more persistent to connect with those around you. By connecting physical locations in Edmonton to a persistent online community we can reduce social isolation, improve mental health and get people out in the community.”

“With the legalization of recreational cannabis throughout Canada rapidly approaching, there is a significant lack of data regarding its use and effect on various aspects of health. By leveraging blockchain technology, Edmonton has the opportunity to shape a new national ecosystem surrounding healthy cannabis consumption and regulation, while simultaneously generating open and transparent data that will have global implications.”

“The current problem with the thousands of fitness app technologies is they’re designed to compete for that market of those 15% of Canadians, the highly motivated, exercise-experienced. Alternatively, the GoGet.Fit solution is designed to specifically target that 85%, the under-serviced mostly apprehensive exercise-naïve population. This solution will provide solid evidence-based strategies early-on to support the pursuit of a healthier active lifestyle and will optimize success through providing valued support from a professional team – their healthcare provider networked with a community-based exercise specialist.”

“Develop an interactive web application that will collect geo-coded Twitter data, analyze the text and link it with socio-economic data. The insight will help planners and policy makers to improve urban design and achieve mental health outcomes.”

“We wish to make significant modifications to a research prototype to enable us to improve accessibility and provide information to wheelchair users about the physical effort needed to propel a wheelchair in our built environments (summer and winter).”

Thoughts on the competition

Picking a winner from those proposals was not easy! We scored each prototype on three criteria: health impact, innovation, and completeness. After each presentation, we had a few minutes to ask questions of the presenters. Everyone did such a good job of describing their prototype and fielding our queries. 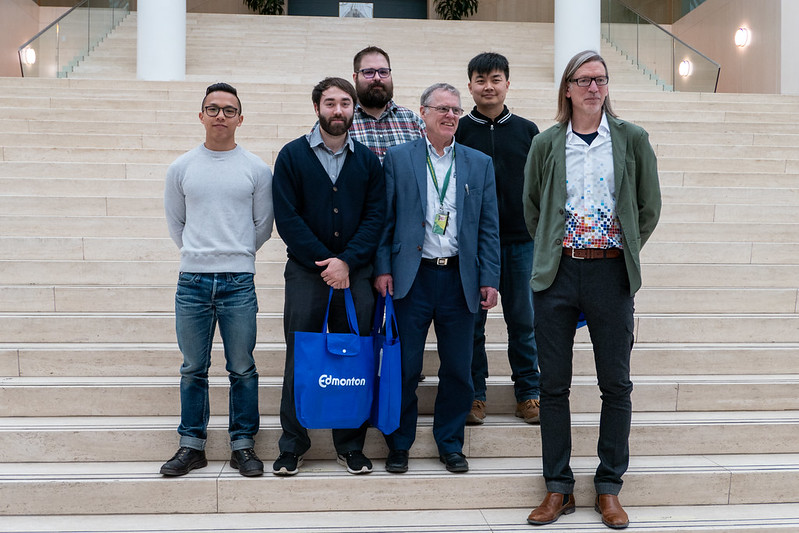 Members of the winning teams

Congratulations to Martin Ferguson-Pell, who took home the grand prize of $5,000 for his “Fitbit for wheelchairs”. While there could be advantages to trip planning using the data that the device collects, I actually think it would be more impactful to map areas of the city and use that to improve infrastructure and design. Pushing around a stroller these past couple of months has made it clear just how difficult it can be to traverse our city sidewalks, so I can’t even imagine what it must be like for wheelchair users. Apparently 75% of wheelchair users report shoulder issues, so anything we can do to make the ride smoother would have a big impact.

I love the premise behind GoGet.Fit: that most existing fitness apps and technologies are targeted toward people who are already active. The other 85% of the population needs some help, or we’re all going to pay for it via increased healthcare costs. Rather than just count steps using a Fitbit, GoGet.Fit connects you with professionals (doctors, nurses, fitness instructors, etc.) so that they can take a more active role in ensuring that you get active! They already have hundreds of users, and have conducted a successful pilot with a PCN.

Troy’s presentation for extending buddy benches into the digital realm was very engaging. Using NFC to quickly connect you to a community of people who have physically been where you are is a great idea. A little like checking in on Foursquare used to be, I guess.

The “Urban Design/Mental Health App” was a neat use of Twitter data, and is something I have often thought about. What can we learn from geotagged tweets that could help us improve the way we build our city?

I’ll admit that a bunch of red flags went up for me on the Cannabis Ecosystem prototype. Blockchain and cannabis? Talk about going after buzzwords! That said, the application of blockchain technology to safely collect and share data on cannabis use is intriguing, and the system they presented seems to be very well thought out. I look forward to seeing how they take it forward!

This being the first year that the City has held the HealthHack competition, they opened it to everyone, which means we ended up with an interesting mix of both existing and brand new projects. We struggled with that as judges. In future years, breaking proposals into two categories would be a good way to allow for both while making the judging a little more fair.

Well done to the finalists and indeed to everyone who submitted a proposal!

Though they share a similar objective – innovation in healthcare – the HealthHack competition should not be confused with Hacking Health, an event that first happened in Edmonton back in 2013. That said, both events help bring the vision that Mayor Don Iveson first shared in 2016 of “positioning Edmonton as a world class health innovation city” to life. It’s exciting to see some real on-the-ground activity! 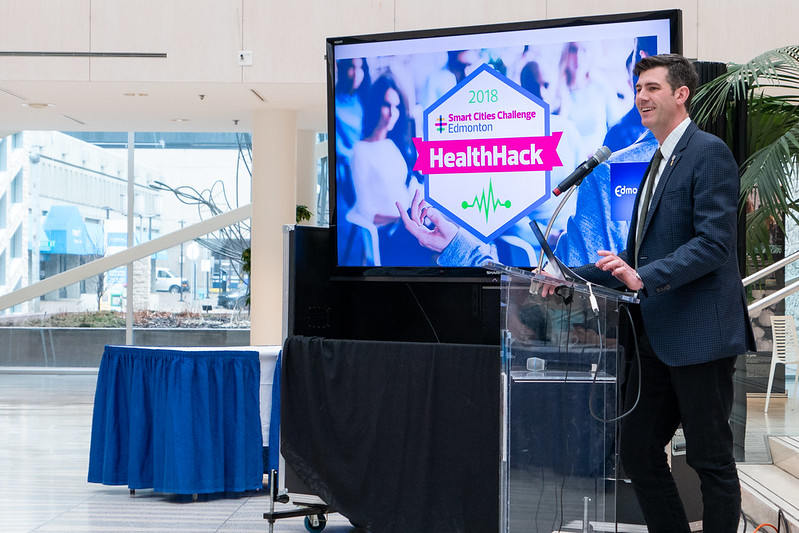 Why Edmonton as a health city?

“The Edmonton ecosystem has a range of assets in the health innovation space. This includes Canada’s largest integrated health system and a readiness to diversify the economy; researchers and entrepreneurs who have created and will create new products, devices and system innovations; and a willingness to take risks in order to drive growth.”

You can learn more about the Health City Initiative here.