Virtual assistants like Alexa, Cortana, and the Google Assistant are at times frustratingly limited, but I also think they are the future. It still feels a bit magical when they work well, and they’re improving every day. In fact, as I have been working on this post over the last couple of weeks, I’ve had to update it a number of times as both Google and Amazon have made improvements that conflicted with what I had previously written! So that’s the first thing to know – the device you buy today won’t be the device you have tomorrow.

I’ve had the Amazon Echo Dot since December and the Google Home Mini since February. To be honest, I am surprised at how quickly they’ve become a regular part of our home. Why do we have both? So I can experiment and compare, of course! 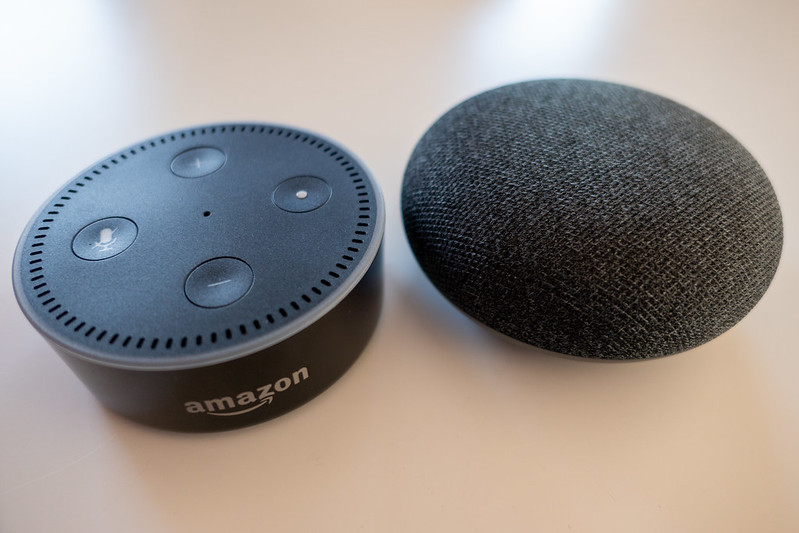 Here’s a category-by-category comparison of each, based on our experience thus far. I’ll generally just refer to “Echo Dot” or “Alexa” and “Home Mini” or “Google Assistant” to make this less verbose.

The “wake word” is the thing you say to trigger the device to start listening. Amazon wins here. Saying “Alexa” is infinitely better than “Hey Google” or “OK Google”. Try saying it a few times, and I think you’ll agree that the latter gets old really fast. You can change the wake word for the Echo Dot, but you can’t obviously do that on the Home Mini (though I’ve read that some people have been able to do this by training the way you say “Hey Google”).

For this reason, I would say the Echo Dot is our go-to device.

I like the overall look of the Home Mini better, with its fabric cover and overall sloped shape. Both devices are about the same size, and the Echo Dot really does look like a hockey puck! For usability though, I’d say the Echo Dot wins, for two reasons. First, the lights on the Home Mini are so much harder to see than the light ring on the Echo Dot. The light ring reminds me a little of the Cortana circle with the way it lights up differently depending on what is happening. Second, the physical buttons on the Echo Dot are nice when you want to adjust the volume quickly. You can do it on the touch-sensitive Home Mini, but I never seem to tap in the right place.

I think the audio quality of the Home Mini is better than the Echo Dot, but neither of them are great (you’ll need to go with the larger versions if you want a really good speaker). Both devices support connecting an external speaker via Bluetooth, and the Echo Dot even has an audio out port if you’d rather go with a cable.

This is probably the task we use our devices for the most. We have a small Bluetooth speaker that we move around the house but in the past we’d have to pair it to my phone, or Sharon’s tablet, or whatever device we wanted to use as a source. Now we just leave it paired to the Echo Dot, and ask Alexa to play music that way. There’s a bit of a delay sometimes when powering on the speaker though, so you miss a few seconds of whatever audio the Echo Dot is playing. I’m not sure if that’s an issue with the Echo Dot or with our speaker, but it’s a minor annoyance.

As Amazon Prime members we get access to Prime Music, so that’s pretty great. You can just ask Alexa to play a song, or an artist, or a genre, and it just works. The selection isn’t always as good as Spotify though, so sometimes we’ll specifically ask to play it “on Spotify”. The playlists on Amazon Prime seem fairly limited by comparison.

Music works just fine on the Home Mini too, with either Google Play Music or Spotify. The ability to ask the Google Assistant to “play that hipster song with whistling” is pretty much just a gimmick though, it’s not something I’d ever use in practice.

Setting a timer is the next most frequent task we use the Echo Dot for. I really like that you can name the timers, and it brings me endless joy to hear the way Alexa says “tea timer” (if it doesn’t know what name you’ve used, it just sets an unnamed timer). When the timer is up, Alexa says “your tea timer is done”. In contrast, the Google Assistant just plays a sound, though you can name your timers there too. Both devices let you query how much time is left, pause, resume, or cancel any timers.

I use Stitcher for podcasts, and it’s a bit frustrating how specific you need to be with the command for Alexa. I have a news playlist setup and I have to say “Alexa, ask Stitcher to play playlist news” exactly like that in order for it to work. But at least it works! I can’t ask the Home Mini to play playlists on Stitcher, as “voice actions are not available for that app.” 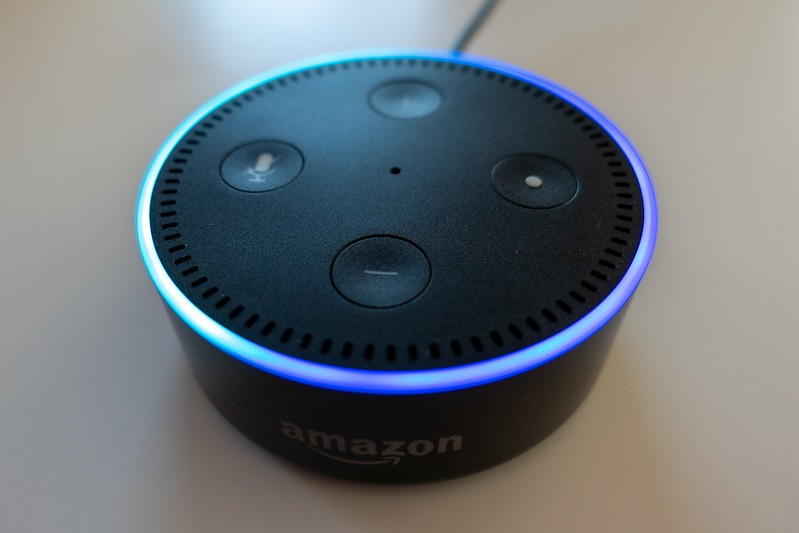 That said, the Home Mini might still have the edge when it comes to podcasts. I can simply say “Hey Google, play the Daily podcast” and on comes Michael Barbaro from the New York Times. Or I can open Stitcher on my phone or tablet, and cast the audio to the Home Mini. That’s pretty powerful. I also get a notification on my phone if Sharon starts casting a podcast from her device.

Both devices handle news pretty well. I can simply say “what’s in the news” and both will give me the latest audio updates. Via both apps you can configure the sources and order of the news briefings, too. We use this first thing in the morning most often, while drinking coffee and browsing the newspaper.

We also use our devices to listen to the radio, and though we struggled at first to find the right commands, it turns out you can simply say “listen to CBC Radio One” and it’ll start playing. You can be more specific with Alexa and specify TuneIn.

I’ve experimented with some different brands and settled on TP-Link’s Kasa devices, as they were the least hassle and most reliable in my experience. In the living room, we have the LB120 Smart Wi-Fi A19 LED Bulb, which is dimmable and lets you adjust the color of the white light from 2700K to 6500K. In the nursery we have a Smart Plug Mini with just a normal lamp plugged into it. In the bedroom we have our humidifier plugged into a Smart Plug with Energy Monitoring.

Both the Echo Dot and Home Mini can control these devices – turning them on or off, adjusting settings like color or brightness, etc.

The Kasa devices support “scenes” which let you configure a bunch of settings into one command. For instance, we have one called “Feed Emily” that turns the living room light on to a really warm, dim white. Both Alexa and the Home Mini support this, so we can simply say “turn on Feed Emily” and the scene is executed. I’ll give the Home Mini the edge here, as it automatically discovers new scenes. With Alexa, you have to open the app and “Discover Scenes” in order for it to show up.

Before I had any of these devices, I mostly thought home automation was unnecessary, especially in a small condo like ours. What’s wrong with a simple LED bulb and good old light-switch? But now, carrying Emily into the nursery to change her diaper, it’s incredibly powerful to simply say “Alexa, turn on the nursery light” on the way, no hands required.

Most of the time we’re asking about the weather or sports scores. Both devices are great at these kinds of queries. Alexa is probably a little better, because her answers are a little more complete. Ask about the temperature and you’ll get the current conditions plus a sentence about what to expect today. That’s two separate queries with the Google Assistant. Likewise, ask Alexa what the score is in the Blue Jay’s game and if it is over, you’ll get the score and when the next game is. Again, two queries with the Google Assistant.

Sometimes our questions are more trivia-like, things like how old someone is, or who was in a particular movie, how far it is between two places, that kind of thing. Generally speaking, the Home Mini wins here, because the Google Assistant is able to give much better answers thanks to Google Search. If it doesn’t know the answer definitively, it’ll give you a brief readout from the top search result. Alexa more often than not simply doesn’t have an answer. There are odd exceptions, of course. For some reason Alexa has no problem telling me how old Genie Bouchard is while the Google Assistant tells me it doesn’t know how to help with that yet. And I would say that Alexa tends to be better at Hollywood-related questions, presumably because Amazon owns IMDB. 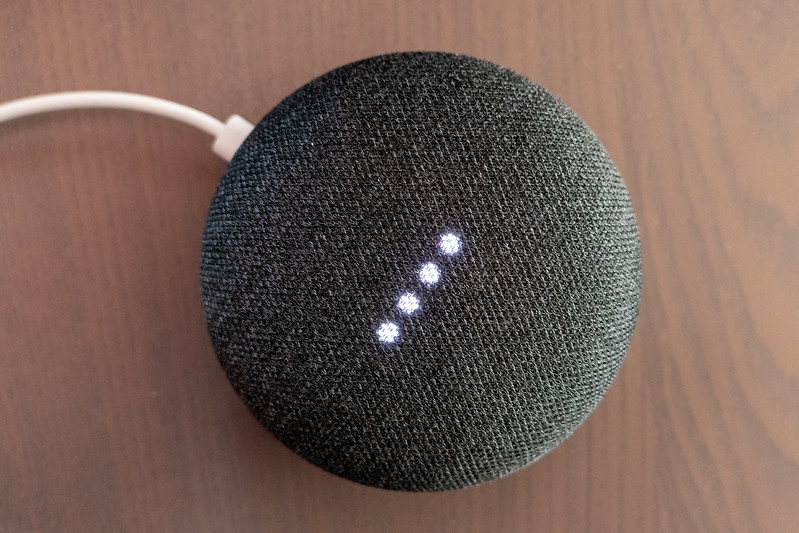 Information lookup is even better if you have an Android smartphone (or maybe the Google app is enough). I can ask the Home Mini about travel times or bus routes and in addition to a verbal answer, the Google Assistant will popup a card with more information on my phone. Super handy. You can’t do that with Alexa.

Asking for general information is simultaneously the best and worst thing about these devices. When they have the answer, it feels like magic. When they don’t, even for something that seems simple, you can’t help but feel let down.

I don’t often use either device for calendar information, to be honest. Mainly because my calendar is always front and centre on my phone, tablet, or desktop. And unlike asking for the weather, listening to a bunch of calendar entries just isn’t as useful as a quick glance.

I use Office 365 and Outlook.com for my calendars. Sharon uses Google Calendar and Outlook.com. We have shared all of our calendars with one another, so they open up just fine on whatever device or app we’re using. We have a shared Family calendar in Outlook.com, and that’s the main one we’d want to inquire about with the Echo Dot or Home Mini.

The Home Mini only supports Google calendars, so the feature is essentially useless for me. The Echo Dot supports Google Calendar, G Suite, Office 365, Outlook.com, and Apple iCloud. You can only link one Microsoft calendar currently though, so you have to choose between Office 365 and Outlook.com. No problem, my Outlook.com has access to all of my calendars, so that’s the one I linked. It works really well, and I can easily ask Alexa about upcoming events. The only issue I ran into is that it only displays 10 of your calendars at a time, so any more than that and Alexa simply won’t see them.

Those are the main things for us thus far. Here are some other random thoughts: 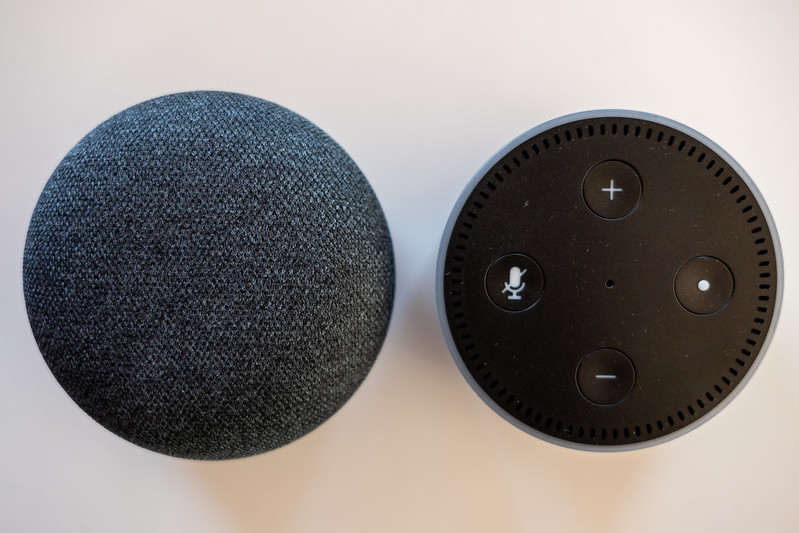 So if I was shopping for one today, which device would I go with? The answer is not obvious as there are strengths and weaknesses with both. If you’re fairly invested in the Google ecosystem, go with the Home Mini. If you’re an Amazon Prime member, go with the Echo Dot. Or do what I did and get both! The arms race underway between the two is only going to make them both rapidly better.

One thought on “Amazon Echo Dot vs. Google Home Mini”