If you’re angry about the Metro Line LRT, then you’ll love Tristin Hopper’s article in today’s National Post. He’s a self-described “fervent – almost fanatical – supporter of public transit” and he doesn’t hold back on eviscerating Edmonton’s latest addition to the LRT network:

“In short, it fails on every single possible justification for why cities should build light rail.”

It’s a colorful piece, complete with a comparison to “a candy company releasing a new chocolate bar called Herpes Al-Qaeda.” But while it’s clear the City of Edmonton made some mistakes and that it would indeed be bad to see them repeated elsewhere, Hopper’s arguments are clearly coming from a place of frustration rather than fact, and he comes off sounding more like a supporter of car culture than the transit booster he claims to be.

Before I get into that, let me say that I’m just as frustrated and disappointed as many of you are with how the Metro Line LRT was handled and how it is still not fully operational as promised. I’ve written a lot about it over the last year, and I’m sure there will be much more to come in the year ahead. There’s no question that the City of Edmonton screwed up on the Metro Line LRT, but Council didn’t do itself any favors by ignoring the project until it was too late either. People have been fired, lessons have been learned, and there’s undoubtedly more fallout to come.

But, let’s not make a mountain out of a molehill, mmkay? 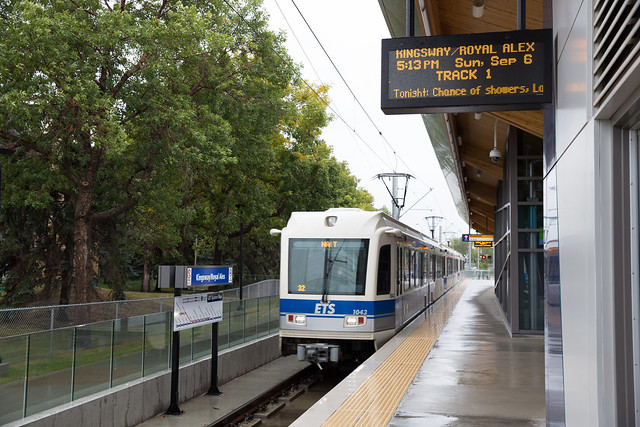 Hopper is right to point out how unacceptable it is that the line breaks down so regularly. And he’s right that due to the signalling system issues, the trains aren’t running as fast as planned. But his article also makes some pretty specious arguments about emissions1 and the impact on ambulances2. Hopper has some nerve adding up the amount of time wasted by drivers waiting for the Metro Line LRT trains to go by, as if those drivers had never before run into rush hour and gridlock. How much “human existence” has commuting by car, a much more dangerous, stressful, and expensive mode of transporation, extinguished? Easier to pick on LRT, I guess.

“The chief problem is that the train was built at grade and cleaves through several major intersections,” Hopper writes. This leads to delays for passengers and a “traffic apocalypse” for everyone else. “I’ve personally clocked a six-minute wait,” he complains. I get it, I hate being made to wait as much as anyone (thank goodness Sharon is a much more patient person than I am). But this is just as silly to highlight now as it was four months ago when the Metro Line LRT opened.

The only reason this extra-six-minutes argument has any appeal at all is that there’s something to blame. Probably every driver has spent far longer than six minutes stuck in traffic on many occasions, but without a train to complain about, those delays are just chalked up to the realities of driving. Over time drivers become oblivious to them. Sure people complain about traffic from time-to-time, but no one is crucifying the City over it like they are with the Metro Line LRT.

Also wrong is complaining about how slow the train ride itself is, especially given that the Metro Line LRT isn’t operating at full-speed yet. Even if it were, LRT isn’t supposed to be faster than other modes of transportation. It can be, in some cases, but it doesn’t have to be and that isn’t the reason to build it in the first place. LRT is primarily about capacity, not speed. And transit is about the network, not a single line.

It’s not the speed that matters

We need not look any further than the existing Capital Line LRT to see that speed isn’t why it has been successful. What if I wanted to get from my house on 104 Street downtown to Southgate Centre? Here’s a look at the trip by mode at three different times for today, according to the fastest option suggested by Google Maps:

And here’s the reverse trip, going back downtown from Southgate:

Depending on the time of day, direction of travel, your speed, and lots of other conditions that you have no control over (traffic, weather, etc.), driving is actually the fastest mode of transportation. LRT is pretty quick, but more importantly is consistent and predictable. My travel time in the real world is far more likely to match the prediction for LRT than it is for a vehicle. Not to mention taking the LRT means you can do something productive or enjoyable while you ride, and you don’t have to pay for parking.

That particular example, downtown to Southgate, makes the time to take the bus seem quite unappealing. Again, that’s to be expected given ETS’ approach of having buses feed into the LRT network, something that will also happen with the Metro Line LRT once it is fully operational. If we look instead at an example where there isn’t LRT, we see that the bus can actually be competitive and maybe even faster than travelling by vehicle. Here’s my place to West Edmonton Mall:

And here’s the reverse trip, going from WEM to downtown:

In this example there’s an express bus that travels between WEM and downtown. Again travelling by vehicle could be faster, but it depends greatly on time of day, direction, and unforeseen circumstances like accidents and weather conditions. The bus would also be subject to some of these considerations, so it’s not as reliable as LRT, but it is still a much more viable option in this example. And you can see how an express bus could potentially be a better way than LRT to achieve a fast trip, especially if it were afforded some of the right-of-way and separation advantages of the LRT (the express bus to WEM shares the road with vehicles and follows all existing signals).

This is all just to show that speed isn’t the driving factor behind LRT. If it were, we’d look at those times above and be complaining that it wasn’t always the fastest option. The negative impacts of LRT on traffic are easy to see, at some point vehicles have to wait for trains. But there are positive impacts of LRT on traffic too. More people riding the train means fewer people driving which means (in theory) less traffic than there would otherwise be. That speeds up commute times for everyone.

But the real reason you build LRT is for the capacity. Here’s what the City of Edmonton’s LRT for Everyone PDF highlights:

One four-car train can move as many people as 600 typical cars. And let’s be honest, you could probably cram even more people onto those trains if you really wanted to. That potential capacity has a real, positive impact on the transportation network as a whole. It makes getting around the city better for everyone.

There are other reasons to build LRT of course. Accessibility, convenience, transit-oriented development, more efficient use of infrastructure, reduced energy use and environmental impact, and much more. But enabling more people to travel more efficiently throughout the city is the big benefit of LRT.

And when you consider it as part of the overall network, with a mix of bicycles, vehicles, buses, and trains, the capacity benefits of buses and trains make an even bigger difference. That’s why shifting Edmonton’s transportation mix to rely less on vehicles is such an important part of The Way We Move.

Hopper seems to suggest that fast LRT that doesn’t impact traffic is the only kind of LRT to pursue and that “don’t let idiots build your transit” is the only lesson to be learned from the Metro Line LRT project. But both of these things are off the mark. You don’t build LRT for speed and you can’t avoid idiots, they’re everywhere.

So yes policymakers of Canada, come to Edmonton and learn from the Metro Line LRT. There are clearly things you can do better and a real-world example to examine is better than a theoretical one. But don’t follow Hopper’s lead in setting the wrong expectations for the “decent, right-thinking people” in your cities. LRT is about much more than speed.

18 thoughts on “LRT is about more than speed”