Today marks the tenth anniversary of the #yeg hashtag on Twitter. Here is the first #yeg tweet:

#Edmonton Twitterers…our neighbours to the south have started using the hashtag #yyc to self organize…cool idea we should borrow? #yeg

That’s probably the only time I have used #Edmonton! Ever since then, it has been nothing but #yeg. Here’s what I wrote about that tweet back in 2009:

“If I remember correctly, I found about the #yyc hashtag while I was in Calgary for BarCampCalgary2 on June 14th, 2008. I learned from @wintr that a few Calgarians had started using the hashtag to tweet about things related to their city. I thought it might be a good idea to do something similar here in Edmonton.”

Timing counts for a lot, and my Twitter story is no different. I was in the right place at the right time and joined Twitter early, on July 14, 2006. It was a fun and frustrating time (remember the fail whale) to be on Twitter. I convinced Sharon to join Twitter fairly early on, in October 2006. Her first tweet, fittingly, was about food. (Her second tweet the next day was an attempt to turn off Twitter, which at the time worked via text message).

Being one of the first people in the world on Twitter meant I was one of the few people to follow when others joined. It also probably meant I was just statistically more likely to be the one to post the first #yeg tweet, though looking back now it is kind of amazing to me that it took two years to do so. On the other hand, it wasn’t until August 2007 that Chris Messina suggested using the # symbol for groups on Twitter and posted the first hashtag in a tweet. Tagging was popular on the web already at that point but the word “hashtag” was new. Its use grew so much that it was added to the Oxford English Dictionary in June 2014. 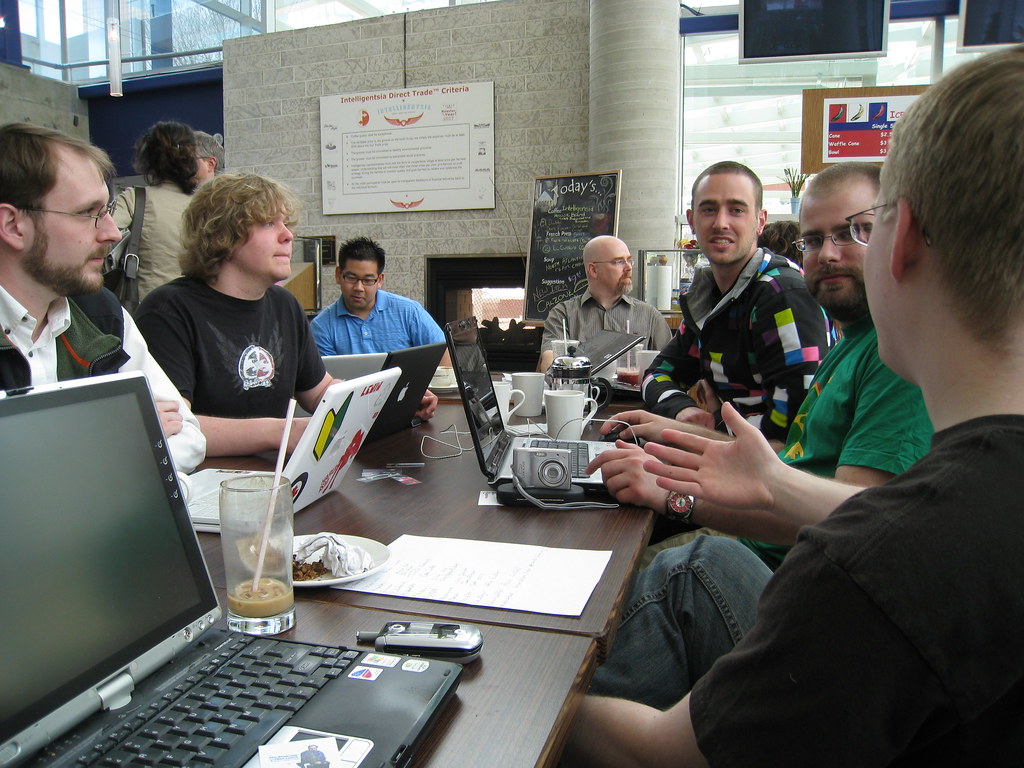 That’s me speaking at the first EdmontonTweetup in May 2008

On the fifth anniversary of the #yeg hashtag in 2013 I wrote:

“People from other cities often comment on how connected and tight-knit the online community in Edmonton seems to be, and I think the #yeg hashtag is really at the heart of that. We’ve used it to make new friends, to share the news, to raise money for important charitable causes, and for thousands of other interesting and important reasons.”

It didn’t take long for Edmonton’s Twitter community to grow beyond simply #yeg. Now people use all kinds of tags that start with #yeg like the ever-popular #yegfood. It used to surprise me to see #yeg used in places outside Twitter. Now, for better or worse, it’s part of the social fabric of our city.

10 years of #yeg on Twitter! Thanks to @mastermaq for championing the community all this time. Thanks to everyone who makes it a wonderful place. Thanks for all the tweetups, for no longer fighting for the muni airport tag instead and for pronouncing it yegg.
10 more years! ❤️ pic.twitter.com/hm9U4Q18kP

Still, it wouldn’t be the hashtag (and community) it is today without all of the people that have worked to support and grow it over the years. Especially Brittney, Adam, Jerry, Tamara, Linda, and Kathleen, to name just a few.

Here’s to the next ten years of #yeg!