After six years of serving the central downtown Edmonton area, Sobeys will close its 104 Street location on July 31. It’s a disappointing end to a store that, while full of promise at its launch in May 2008, never really lived up to its potential. It’s also a high profile loss for 104 Street, which has seen a number of businesses close over the last year or so, and a potential setback for Edmonton’s ongoing downtown revitalization.

Keri Scobie, Communications Manager for Sobeys West, confirmed the closure yesterday. “It was a really tough decision to make,” she told me. “We knew this was going to be a hot topic of discussion.” 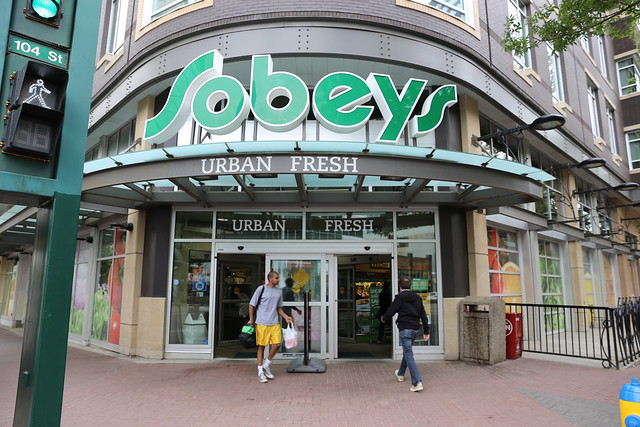 A spokesperson told the Globe and Mail late Wednesday that Sobeys had “identified a number of underperforming stores and we have made the decision to close these stores.” It appears the 104 Street location is one of those underperforming stores, and there approximately 50 in total across the country, according to a Sobeys news release:

Sobeys is planning to close three other stores in Edmonton as well: Sobeys Mainstreet in Mill Woods at 6440 28 Avenue, Heritage Sobeys at 2011 111 Street, and Clock IGA at 15445 Stony Plain Road. Employees received letters upon arriving at work yesterday informing them of the planned closures. They’ll have the option of transferring to another location. “We have a lot of vacancies at other stores in Edmonton,” Keri said.

In order to get approval for its purchase of Safeway Canada, Sobeys agreed to sell 30 stores in Western Canada. Co-op agreed to purchase three stores in Edmonton and another three in the region, and the fact that the 104 Street location wasn’t one of them was seen as a vote of confidence from Sobeys. Now Sobeys has made it clear that assumption was invalid.

Two Urban Fresh locations in Toronto are also closing, but the second Edmonton location at College Plaza will remain open, as will ten other locations throughout Ontario.

From Urban Fresh to Closure

At the start, it seemed as though Sobeys wouldn’t have any problem attracting customers. “Again and again, the staff at the front door of the new Sobeys on Jasper Avenue and 104th Street smile and apologize, as they turn away would-be customers,” Paula Simons wrote in May 2008, just days before the store officially opened to the public.

When it first opened, the Sobeys on 104 Street was meant to bring a European-style market to downtown. It was the first location to bring Sobeys’ “urban fresh” concept to life – smaller, featuring local food, more prepared items, a cafe, and other urban-friendly amenities. Relationships with the popular City Market were touted, and excitement was high. While initial feedback was mostly positive, it wasn’t long before elements of the initial vision started to fall away. The building still retains the “urban fresh” branding, but that long ago lost any meaning. 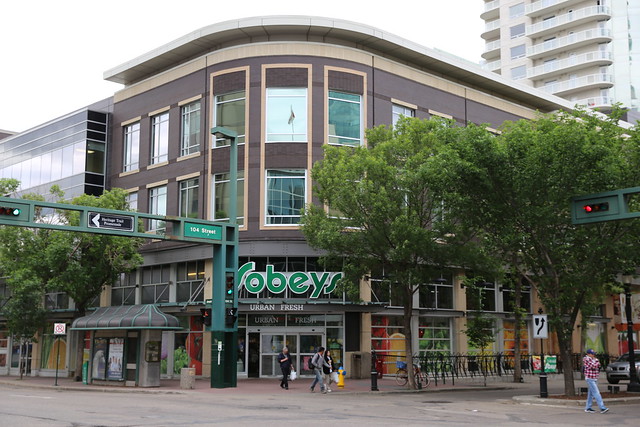 In the summer of 2011, Sobeys on 104 Street caused an uproar in the community when it covered its windows with vinyl. Over the first three years of its existence, the store had fully transformed from “urban fresh” to just another grocery store, and residents saw the vinyl windows as the last straw. Sobeys responded to the criticism by meeting with the community and partially removing the vinyl coverings. The communications director at the time, Mike Lupien, indicated that Sobeys wanted to make the store work. “It’s a community store, it’s a neighbourhood store,” Mike said. “We want to be here, and we want to be here for the long-term.”

Today Keri elaborated on why the 104 Street location was identified for closure. “What happens is the size of the store impacts our ability to deliver our brand promise,” she said. “The smaller formats make it harder to deliver what we want to deliver.” She noted the coffee bar takes up quite a bit of room, and shoppers have complained about the smaller selection of products available. I asked her if any alternatives were considered, such as renovating and changing the layout, but she said “given the space and what we have, it was determined it was the best decision to close.”

As a resident on the street, I’m sad to see the Sobeys close. It was great to be able to walk down the block to pickup some milk or a last minute ingredient. I do think the store suffered from long lineups at the checkout (and no express or self-checkouts) and generally indifferent staff, and that made the experience of shopping there much less enjoyable than it could have been. Though prices did come down over the years, they were still higher than other locations, such as Save-On-Foods over on 109 Street.

What’s the impact on downtown?

Cecil Place is the name of the building that houses Sobeys Urban Fresh, named in recognition of the infamous Cecil Hotel. Developed by John Day who purchased the old hotel in May 2003, Cecil Place was designed by Arndt Tkalcic Bengert Architecture and cost $12.6 million to build (it took 14 months to complete). In 2007, it won an Edmonton Urban Design Award. Jurors commented at the time, “if you want to get people downtown this is the way to do it.” 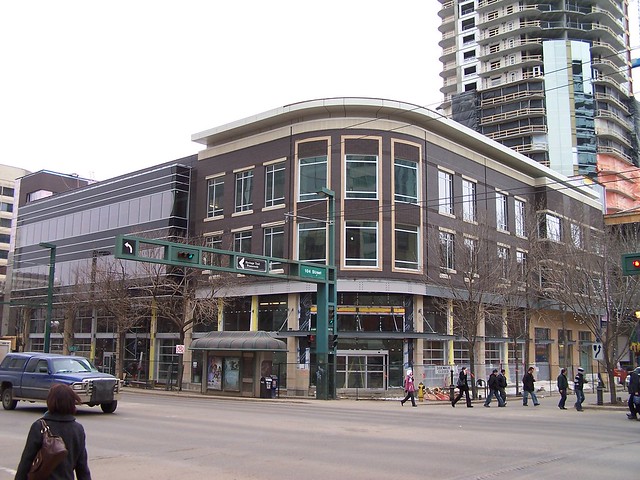 The closure is a loss for 104 Street and downtown, no question. It’s not fatal however, and with new condo towers well underway and the addition of Earth’s General Store in place of the old Pangea organic market further north on 104 Street, I don’t believe the loss of Sobeys will have a lasting impact. Demand will continue to grow as more and more people choose to live downtown and all those new condo towers fill up, and I imagine finding a new tenant for the space today will be much easier than it was back in 2007. Unlike in the past, 104 Street isn’t a gamble anymore.

Sobeys leased the space in Cecil Place, there will be no covenants impacting the ability of another grocer to move in. “That’s not applicable for this location,” Keri clarified. She said the majority of the Sobeys locations being closed were leased.

“If there is a positive,” Keri told me, “it’s that there is a lot of exciting development on the street really reinvigorating that neighbourhood.” However, the bright future of 104 Street wasn’t enough to save the store. “Closing the store was the best decision for us to make.”

What will replace the Sobeys? That remains to be seen, but there’s few other locations downtown that are as attractive as the corner of 104 Street and Jasper Avenue. If I could wave my magic wand, I’d love to see the location turn into a year-round space for the City Market. One can dream, right?

As for Sobeys in Edmonton, Keri told me that Sobeys remains committed. “We see Edmonton as a good market, which is why we’re investing here,” she said. Sobeys is opening a brand new location tomorrow morning in Newcastle at 16943 127 Street. “It’s a new concept store, the third in Western Canada,” Keri explained. “It features a revamped store layout, vibrant colors, and a focus on food discovery throughout the store.” Echoing what was said of Urban Fresh when it opened, Keri suggested the new store will “have a real market feel to it.”

In the cuthroat grocery business, competition is fierce, and Sobeys is constantly evaluating their locations. “We have had great success here in Edmonton,” Keri said, “that’s why we’re bringing the new concept store here.”

Unfortunately, the 104 Street store just hasn’t worked out for Sobeys from a business point-of-view. “We want to thank the community downtown who came in and supported the store,” Keri said.